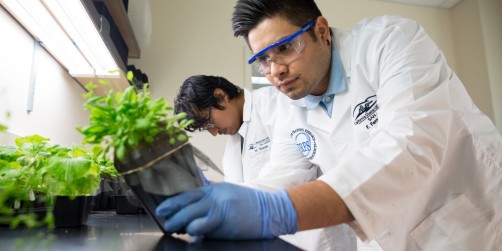 "The opportunities available to me at CSU San Marcos have been countless.”

Just six years ago, Francisco Fernandez immigrated to the U.S. on his own and with very limited fluency in English. Today, the CSU San Marcos biology student has plans of earning a Ph.D. and running his own research lab for underrepresented students.

When Francisco Fernandez came to the U.S. on his own in 2011, the only English he knew was "hello." So while working at a car wash near San Diego, the 18-year-old would practice more words, repeating the names of the car parts over and over to expand his vocabulary. At night, he took English and GED classes.

Fast forward six years and Fernandez, now 24, is nearing the finish line of his undergraduate program at California State University, San Marcos; in May 2018, he'll earn a bachelor's in biological sciences with a concentration in molecular and cellular biology.

"As a child, I didn't know going to college was an option. I was always told that to go to school, you had to be rich," remembers Fernandez, who was born in the United States, but moved to Guadalajara, Mexico as an infant.  "I grew up in a very humble town. We didn't have a lot as children."

On the day after his 18th birthday, Fernandez left Mexico, hoping to find a well-paying job to support himself and his family. He told his mother, "I want to do something big with my life."

A Bridge to the Future

What "something big" meant, Fernandez didn't know. But one day while working at the car wash, he noticed a Palomar College parking permit on a car. Intrigued, he asked the owner about the community college in San Marcos.

A few weeks later, he applied to Palomar and took a placement test — which he failed miserably. Unfazed, Fernandez simply redoubled his efforts, studying advanced English vocabulary for 20 hours a week. The next time he took the test, he passed.

"At that point, I didn't know very much about science, but I did know that it interested me," he recalls.

It was while studying life science at Palomar that a faculty mentor introduced him to the Bridges Scholar program, an undergraduate research program run in conjunction with CSU San Marcos. It was Fernandez's first experience not only of the California State University, but of research.

From the moment he set foot in that first lab, he was hooked. "It was really when I transferred to CSU San Marcos that all the doors opened," he reflects. "That was when everything changed for me.

"The opportunities at CSU San Marcos are just countless."

Fernandez soon began working alongside Matthew Escobar, Ph.D., professor of biological sciences at CSUSM. Dr. Escobar told his student about financial aid and why he needed hands-on lab skills as an undergraduate.

"Dr. Escobar doesn't just train me for research programs at CSUSM, he trains me to go out into the world," stresses Fernandez. "You need to have someone who guides you and tells you about the opportunities that are out there. I didn't have any of that growing up. Just someone telling you, 'You should apply to this,' could make all the difference."

From Mentee to Mentor

"Before coming to CSU San Marcos, I never saw a Mexican scientist," says Fernandez, who serves as the campus secretary for the Society for the Advancement of Chicanos/Hispanics and Native Americans in the Sciences. "I want these students to see someone who looks like them in the lab."

He isn't waiting to graduate to get started on that mission. Scholarships and fellowships have made it easier to spend more time on campus and working with youth at nearby community colleges and high schools.

"I have had great mentors; I know the importance of mentors in someone's life," he notes, adding that sometimes he just needs to boost someone's confidence or dispel myths about college. "Many students I talk to think they aren't smart enough to go into science. But I tell them, 'You don't need to be a genius. You do need to work hard.'"

Next for Fernandez will be working toward a doctorate in biomedical research and, he hopes, someday leading his own research lab. "If you would have told me even two years ago that I would be applying to top Ph.D. programs as an undergraduate student — I mean, it's just crazy…" He trails off, unable to find words to convey the pride he feels.

Much easier is articulating his gratitude to the CSU — "CSUSM gave me the exposure and resources to reach my goals. Everyone on campus is always ready and willing to help."

Success is still best measured by family, says Fernandez, the eldest of five: "I want [my siblings] to believe in themselves and see that they have the power to make a difference, especially in something like science," he explains.

"Maybe if I become a scientist, my little brother will see that and know that he can go to school and study hard and do something big. That is what drives me — making a difference and giving back."