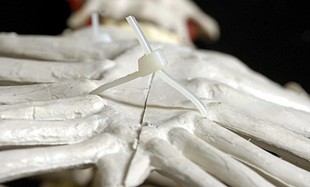 Biomedical engineering undergraduates at Johns Hopkins have invented a new way to close the chest after heart surgery. It uses polymer cable ties threaded through the ribs in place of steel wires that are used to pierce the breastbone in most operations today. 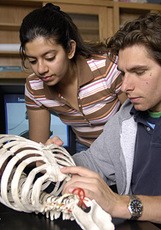 Neha Malhotra and Chris Weier led a team of Johns Hopkins biomedical engineering students who devised a new way to close a chest after heart surgery. Team members tested the system on a model skeleton (pictured) and studied human anatomy in a cadaver lab. 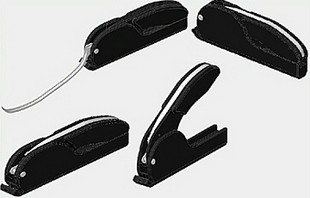 Here are four views of the tool devised by Johns Hopkins biomedical engineering undergraduates as part of a new system to close the chest after heart surgery. The long extension piece is used to guide a polymer cable tie between and under the ribs so that a surgeon can use it to pull together pieces of the severed sternum. 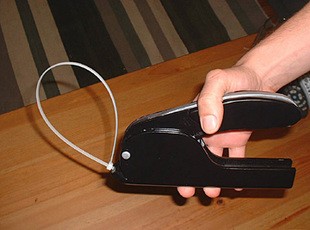 After the cable tie is looped through the ribs, one end is reinserted in the tool. When the handles are squeezed, it operates like a ratchet to pull pieces of the breastbone firmly together so they can heal. 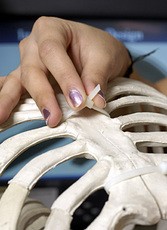 The student inventors say their cable ties should reduce the risk of injuries that are sometimes caused by the steel wires currently used to close the chest after heart surgery. They recommend the use of a biocompatible polymer material that dissolves harmlessly in the body.

Newswise — To operate on the heart, surgeons usually cut through the breastbone. After correcting the heart problem, they reconnect the sternum by piercing it with steel wires, pulling the bone segments together and twisting the wires tight. Because this half-century-old technique poses some risks to both the surgeon and the patient, undergraduates at The Johns Hopkins University have invented a less intrusive and potentially safer chest closure system that threads locking polymer clasps through the ribs.

Malcolm Lloyd, a physician and co-owner of the company, said he and his partner, heart surgeon Mark Sumeray, challenged the students last year to devise a better way to close the chest after surgery. "The premise was based on an unmet need identified by cardiothoracic surgeons," Lloyd said. "The students came up with a working prototype that hit all of the engineering requirements we proposed. The end result was better than my partner and I expected, particularly given the limitations they had in terms of resources."

The students produced their prototype, which resembles a stapler and uses standard locking cable ties, for about $1,500. Much of this went to a private prototyping shop that built the device according to the students' detailed design drawings. A roughly 8-inch curved piece extends from the handheld tool to guide the tie between and under the ribs, enabling a surgeon to connect both ends and pull the severed sternum parts toward one another. When one end of the tie is reinserted into the tool and the handles are squeezed, the device operates like a ratchet, tightening the clasp and bringing the pieces of the breastbone firmly together so that the healing process can begin.

In a class called Biomedical Engineering Design Teams, the project was adopted last fall by a group led by Chris Weier, a 23-year-old senior from Sterling Heights, Mich., and Neha Malhotra, a 20-year-old junior from Dubai, United Arab Emirates. As part of their research over two semesters, team members visited a human cadaver lab to study chest anatomy. They conducted tests in a hospital biomechanics lab to see how the polymer ties compared to the steel wires. Members of the team, which included six freshmen, three juniors and two seniors, also worked with a model chest skeleton.

"Everyone was really involved, and everyone made a contribution to the project," Malhotra said. "Getting a provisional patent made the team feel like we really accomplished something."

Weier added: "This was not just a textbook problem. This was like a real-life industrial project with deadlines and patent searches."

If the prototype advances through further development and testing, many patients could benefit, the student inventors said. According to their research, the vertical cut in the breastbone, called a median sternotomy, was done in more than 700,000 operations worldwide in 2002 alone. The students also learned that the traditional method of reconnecting the sternum can cause injury because of the significant force needed to pierce the breastbone in order to accommodate the steel wires. They learned that these wires can sometimes cut through the bone if they are pulled too tight or can lead to poor bone reconnection if they are left too loose.

"We talked to doctors and asked them what would be an ideal system," Weier said. "They said it would be a band that they could tighten. It needed to be very rigid, as tight as possible without cutting into the bone, the flatter the better so that it could lay flat against the bone."

The team members concluded that their system was a safer approach. "We think it will reduce potential injuries to both the patients and the surgeons because the surgeon isn't physically pushing a needle through a bone," Malhotra said.

Although the students used commercial cable ties for their prototype, they said patients would best be served by a biocompatible polymer clasp that would dissolve harmlessly in the body after two years, when the sternum is fully healed.

Lloyd, the project's sponsor, watched a demonstration of the finished prototype and walked away impressed. "I think it was a great learning experience for the students," said Lloyd, who earned a bachelor's degree in biomedical engineering at Johns Hopkins in 1994.

High-resolution color images of the team leaders and the system are available; contact Phil Sneiderman.