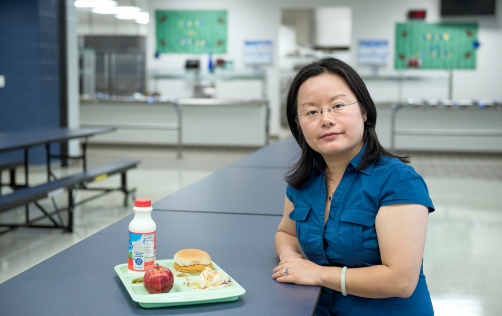 Newswise — Government-funded school meals are putting financially vulnerable children at risk of being overweight, a Virginia Tech researcher has found.

As millions of kids who eat government-funded breakfasts or lunches head back to school this fall, most of them will participate in meal programs that may be part of the cause of the nationwide obesity epidemic.

Students from low-income families and those who live in the Northeast, South, and rural America are most susceptible to the problem.

“While well-intentioned, these government funded school meal programs that are aimed at making kids healthy are in fact making participating students more at risk of being overweight,” said Wen You, associate professor of agricultural and applied economics in the College of Agriculture and Life Sciences. “This study identifies the hardest battles in crafting policy to alleviate children in low-income populations being overweight.”

You’s findings were recently published in the journal Health Economics.

You found that those children who were most likely to be overweight came from families who participate in both the school breakfast and lunch programs consistently throughout their elementary and intermediate school years. These children consume one-third to one-half of their daily meals at school.

“We found that the longer children were in the programs, the higher their risk of being overweight. We also saw the most negative effect of the government-funded school meal programs in the South, the Northeast, and rural areas of the country,” You said. “The question now is what to do in order to not just fill bellies, but make sure those children consume healthy and nutritious food — or at least not contribute to the obesity epidemic.”

The study also found in the South the most significant impact on child weight was in the fifth grade, and in the Northeast, in the eighth grade.

The study comes on the heels of the Healthy Hunger-Free Kids Act of 2010, which raises the school meals’ nutrition quality standards and the Community Eligibility Provision that allows schools in high-poverty areas to provide free meals to all students. The new legislation took effect in 2014-2015 school year.

"It’s potentially troubling since even the nutritional targets of previous standards were not being met satisfactorily prior to this new legislation, and now there are potentially millions more kids who could be affected by accessing free school meals,” said You, who did not have data to assess the impact of the newly adopted pieces of legislation in her study.

You and her colleague Kristen Capogrossi, a former doctoral student at Virginia Tech and now an economist at RTI International, examined both long-term and short-term school meal programs participation effects and the specific short-term participation effect of those students whose families may have experienced intermittent poverty and switched participation status along the way.

They found that long-term participation posed the largest risk of being overweight. The study utilized a nationally representative longitudinal data of 21, 260 students who were followed from kindergarten to eighth grade and controlled for the self-selection and income effects to examine school meal programs’ influence on the change in students' body mass index.The study utilized statistical methods to match students who were eligible and chose not to participate in the school meal programs with students who chose to participate to ensure comparability. The team also examined a subgroup of students who changed their program participation status along the way and confirmed the short-term risk of being overweight imposed by the school lunch program.

The study reveals the need for improving the school meal programs’ effectiveness at promoting better nutrition among school-age children. Although the research is limited at looking at the school meal programs as a whole, it uncovers the need to go beyond merely raising nutrition standards to comprehensively designing how the programs can enable schools to provide not just healthy food that meets standards, but also healthy food that will be acceptable and appetizing to children.

“Policymakers need to consider all the aspects of school meal programs – from availability and affordability to nutritional content and tastiness. It is important to have extra policy support that will allow funding for programs, such as chef-to-school and farm-to-school, as well as culinary training for cafeteria staff so kids actually enjoy eating what is ultimately prepared for them,” said You. “This study also helps to identify the regions that are most in need and calls for targeted policy design,” she said.

The study was funded in part by the Research Innovation and Development Grants in Economics Center for Targeted Studies and the National Institute of Food and Agriculture, part of the U.S. Department of Agriculture.

Our studioVirginia Tech's television and radio studios can broadcast live HD audio and video to networks, news agencies, and affiliates interviewing Virginia Tech faculty, students, and staff. The university does not charge for use of its studios. Video is transmitted by LTN Global Communications and fees may apply. Our namePlease refer to the university as Virginia Tech in news coverage. Our official name is Virginia Polytechnic Institute and State University, but using the full name is cumbersome. Thus, "Virginia Tech" (without the word university on the end) is preferable.