Insight into mechanisms that provide and regulate feedback during motor performance 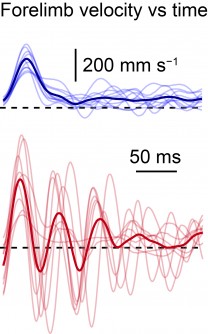 Newswise — NEW YORK, NY (April 30, 2014) — Researchers have identified two types of neurons that enable the spinal cord to control skilled forelimb movement. The first is a group of excitatory interneurons that are needed to make accurate and precise movements; the second is a group of inhibitory interneurons necessary for achieving smooth movement of the limbs. The findings are important steps toward understanding normal human motor function and potentially treating movement disorders that arise from injury or disease.

“We take for granted many motor behaviors, such as catching a ball or flipping a coin, that in fact require considerable planning and precision,” said Columbia University Medical Center’s (CUMC’s) Thomas M. Jessell, PhD, a senior author of both studies, which were published separately in recent issues of Nature. “While such motor acts seem effortless, they depend on intricate and carefully orchestrated communication between neural networks that connect the brain to the spinal cord and muscles.”

To move one’s hand to a desired target, the brain sends the spinal cord signals, which activate the motor neurons that control limb muscles. During subsequent movements, information from the limb is conveyed back to the brain and spinal cord, providing a feedback system that can support the control and adjustment of motor output.

“But feedback from muscles is not quick enough to permit the most rapid real-time adjustments of fine motor control,” said Dr. Jessell, “suggesting that there may be other, faster, systems at play.” Dr. Jessell is the Claire Tow Professor of Motor Neuron Disorders in the Departments of Neuroscience and of Biochemistry and Molecular Biophysics, co-director of the Mortimer B. Zuckerman Mind Brain Behavior Institute, co-director of the Kavli Institute for Brain Science, and a Howard Hughes Medical Institute investigator, all at Columbia.

Researchers had suspected that one rapid form of feedback might derive from a group of interneurons in the cervical spinal cord called propriospinal neurons (PNs). Like many other neurons, PNs send signals to motor neurons that innervate arm muscles and trigger movement. But this subset of neurons also has a distinct output branch that projects away from motor neurons towards the cerebellum. Through this dual-branched anatomy, these neurons have the potential to carry internal copies of motor output signals up to the brain.

However, the nature of this internal feedback pathway and whether it has any impact on movement have not been clear. “If PNs were indeed sending copies of outgoing motor commands to the brain, they could provide a conveniently rapid means of adjusting ongoing movements when things go awry,” said Eiman Azim, PhD, a postdoctoral fellow in Dr. Jessell’s lab and lead author of the first paper. “But without a way to selectively target the copy function of PNs, there was no way to test this theory.”

The CUMC team, in collaboration with Bror Alstermark, PhD, a professor in integrative medical biology at Umeå University in Sweden, overcame this technical barrier by developing a genetic method for accessing and eliminating PNs in mice, abolishing both motor-directed and copy signals sent by the neurons. When the researchers quantified the limb movements of the PN-deprived mice in three dimensions as they reached for food pellets, they found that the mice’s ability to reach for the target accurately was badly compromised. “Basically, their movements were uncoordinated,” said Dr. Azim. “The PN-deprived mice consistently over- or under-reached.”

But with both PN output signals gone, the precise role of the PN copy signal remained unclear. The researchers then turned to optogenetics—the use of light to control neuronal activity. They selectively activated the copy axonal branch alone, decalibrating this copy signal from the version sent to motor neurons. With the copy signal altered, the animals’ ability to reach was severely compromised, indicating that the PN copy pathway is capable of influencing the outcome of goal-directed reaching movements. The PN copy signal also works blazingly fast. It takes just 4 to 5 milliseconds for motor neuron activity to be altered after transmission of a PN copy signal. “These reaching movements typically take 200 to 300 milliseconds, so the PN copy signal pathway appears well equipped to correct arm movements,” said Dr. Azim. The researchers think that this copy signal represents just one of many similar internal feedback pathways that the spinal cord and brain use to validate and correct movements throughout the body.

Are these findings relevant to human motor performance? Many of the pathways and circuits that influence reach and grasp in monkeys and humans are conserved in mice. “We need to learn more about these pathways before we can evaluate how their dysfunction contributes to deficits seen after spinal cord injury and neurodegenerative disease,” said Dr. Azim.

In the second Nature study, CUMC researchers examined how spinal circuits regulate sensory feedback from muscles to control movement. The simplest form of this feedback system involves a reflex pathway (such as the knee-jerk reflex), in which sensory endings in muscles convey signals to the motor system through direct monosynaptic connections with motor neurons. Signals from motor neurons, in turn, cause muscles to contract, completing the reflex cycle.

Researchers have long wondered how the strength of this sensory signal might be regulated. Studies had shown that spinal interneurons—in particular those that release the neurotransmitter GABA, inhibiting neuronal activity—play a key role in this process. But most GABA-releasing interneurons exert their effects postsynaptically, by blocking the excitation of neurons on the receiving end of a synapse (the gap across which two neurons communicate).

“We knew that such neurons are unlikely to be responsible for fine-tuning the sensory signal,” said lead author Andrew J. P. Fink, PhD, a former graduate student in Dr. Jessell’s lab. “Postsynaptic inhibition affects the entire neuron, and motor neurons receive many different inputs. So a mechanism that shut down the motor neuron to all of its inputs would lack refinement.”

Researchers have long speculated that one subset of GABAergic interneurons might regulate movement by controlling the strength of sensory feedback signals from muscles. “These particular neurons are known to work presynaptically, by forming direct connections with the terminals of sensory neurons and suppressing the release of sensory neurotransmitter,” said Dr. Fink. For technical reasons, the function of these interneurons, if any, in motor behavior has remained elusive.

Dr. Fink and his colleagues identified a way to access this subset of interneurons genetically in mice and then devised approaches to manipulate their function in a selective manner. In one experiment, they activated presynaptic inhibitory interneurons optogenetically, decreasing the strength of sensory-motor transmission. They also ablated these interneurons by making them selectively sensitive to a lethal toxin, abolishing their control over sensory feedback strength. Without sensory feedback regulation, forelimb movements were dominated by severe oscillatory tremors, drastically diminishing motor accuracy.

This finding, along with parallel modeling studies, indicates that presynaptic inhibitory neurons normally adjust the “gain” of sensory feedback at synapses with motor neurons and are therefore crucial for the smooth execution of movement. Understanding how these basic microcircuits regulate sensory input and motor output may, in the long run, provide insight into ways to combat the movement instability and tremor seen in many neurological disorders.

“These two studies shed new light on how discrete classes of spinal interneurons empower the nervous system to direct motor behaviors in ways that match the particular task at hand,” said Dr. Jessell.

The department has 23 faculty members with primary appointments and an additional 12 faculty members with secondary appointments, as well as 40 postdoctoral researchers. The department also administers the university-wide doctoral program in neurobiology and behavior, which has approximately 90 graduate students. Interdisciplinary research is facilitated by widespread collaboration among labs, as well as with other Columbia centers and institutes, including the Mahoney-Keck Center for Brain & Behavior, the Kavli Institute for Brain Science, the Center for Theoretical Neuroscience, the Center for Motor Neuron Biology and Disease, the Taub Institute for Research on Alzheimer’s Disease and the Aging Brain, and the Sackler Institute for Developmental Psychobiology. The department also has strong ties to the Faculty of Arts and Sciences on the university’s Morningside Campus.

The Mortimer B. Zuckerman Mind Brain Behavior InstituteColumbia University’s Mortimer B. Zuckerman Mind Brain Behavior Institute is an interdisciplinary center for scholars across the university, created on a scope and scale to explore the human brain and behavior at levels of inquiry from cells to society. The institute’s leadership, which includes two Nobel Prize-winning neuroscientists, and many of its principal investigators will be based at the 450,000-square-foot Jerome L. Greene Science Center, now rising on the university’s new Manhattanville campus. In combining Columbia’s preeminence in neuroscience with its strengths in the biological and physical sciences, social sciences, arts, and humanities, the institute provides a common intellectual forum for research communities from Columbia University Medical Center, the Faculty of Arts and Sciences, the School of Engineering and Applied Science, and professional schools on both the Morningside Heights and Washington Heights campuses. Their collective mission is to further our understanding of the human condition and to find cures for disease.