Herbicide Resistance, and Weeds, Are Spreading in the United States 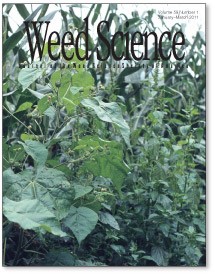 Newswise — Herbicide resistance is growing. At least 21 weed species have now developed resistance to glyphosate, a systemic herbicide that has been effectively used to kill weeds and can be found in many commercial products. Some weeds are now developing resistance to alternative herbicides being used. New occurrences of resistance are being noted in varying weed species and locations, creating challenges for weed scientists.

Palmer amaranth is a common weed that competes with cotton, soybean, corn, grain sorghum, and peanut crops in the southern United States. A density of 10 of these weeds per row of cotton has been shown to reduce yields more than 50 percent. By 2010, 52 counties in the state of Georgia had infestations of glyphosate-resistant Palmer amaranth.

Field and greenhouse tests conducted for the current study now confirm that this weed is resistant not only to glyphosate, but also to phrithiobac, an acetolactate synthase-inhibiting herbicide. This marks one of the first reports of multiple resistance to both glyphosate and pyrithiobac in Palmer amaranth. As multiple herbicide resistance becomes more common, a grower’s ability to be economically sustainable is threatened.

In West Memphis, Ark., another study reports the first documented glyphosate-resistant johnsongrass biotype in the United States. A soybean field in continuous production over 6 years showed reduced control of johnsongrass with the recommended application rate of glyphosate. A greenhouse study was conducted with this johnsongrass to confirm this finding and determine any differences in absorption or translocation of the herbicide within these plants.

As herbicide resistance spreads, growers will need new weed management strategies. These could include herbicides with alternative sites of action within the plant or nonchemical methods such as tilling and mulching. Growers should prevent resistant weeds in a production field from reaching reproductive maturity to prevent spread of the trait through seed or pollen.

Full text of “Multiple Resistance in Palmer Amaranth to Glyphosate and Pyrithiobac Confirmed in Georgia,” and other articles in Weed Science, Vol. 59, No. 3, May-June 2011, are available at

About Weed ScienceWeed Science is a journal of the Weed Science Society of America, a non-profit professional society that promotes research, education, and extension outreach activities related to weeds; provides science-based information to the public and policy makers; and fosters awareness of weeds and their impacts on managed and natural ecosystems. For more information, visit http://www.wssa.net/