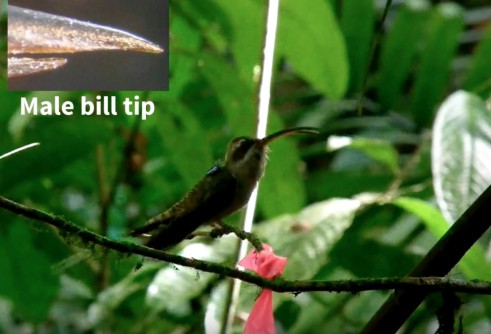 A long-billed hermit hummingbird involved in Marcelo Araya-Salas' to see whether the pointiness of bills is important in holding prime mating territories. 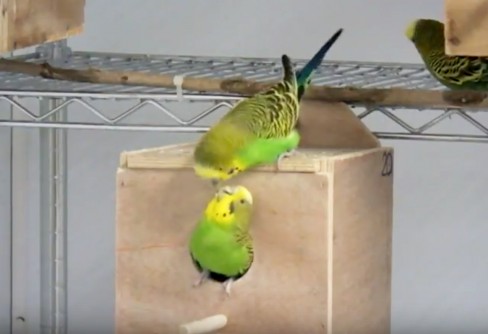 Angela Medina-Garcia is using parakeets in her research to see whether females preferred to mate with males that scored better on intelligence tests.

Newswise — Two former New Mexico State University biology graduate students are currently publishing their dissertation research investigating how the selection of mates may have contributed to the development of sophisticated cognitive abilities in birds.

Marcelo Araya-Salas and Angela Medina-Garcia have worked with NMSU’s professor Tim Wright, who runs the Avian Communication and Evolution Lab.

“Araya-Salas was my Ph.D. student and is now a postdoctoral researcher at the Cornell University Lab of Ornithology,” Wright said.

Araya-Salas’ research focused on long-billed hermit hummingbirds. It was previously thought that body size and pointiness of bill were important traits in holding and defending prime mating territories.

Araya-Salas published his findings, part of his thesis, as a research article in the Scientific Reports journal (https://www.nature.com/articles/s41598-018-20441-x).

“Medina-Garcia defended her Ph.D. last fall and is now a postdoc at the University of Colorado,” Wright said. “She investigated similar questions using laboratory populations of the common pet store parakeet.”

Medina-Garcia ran males through a series of tests challenging different cognitive abilities, then exposed these males to a population of females to see whether females preferred to mate with males that scored better on these tests.

“She found that when she released all these males together with females in an open aviary and allowed them to breed, females did not necessarily choose the smarter males as their social partner,” Wright said. “However, when she genotyped the chicks using molecular markers, she found that females did choose smarter males significantly more often as the sires of their young.”

Furthermore, Medina-Garcia found that smarter males raised more of their offspring to a fledgling age and so appeared to be better fathers.

“These findings are very exciting since nobody has shown before that smart males father more chicks in a monogamous bird,” said Medina-Garcia.

Medina-Garcia is currently writing up her findings and expects to send out the article for publication in scientific journals in the near future.

“In summary the results from both studies (Araya-Salas’s and her own), in very different bird species, strongly support the idea that females prefer to mate and raise chicks with smart males,” Medina-Garcia