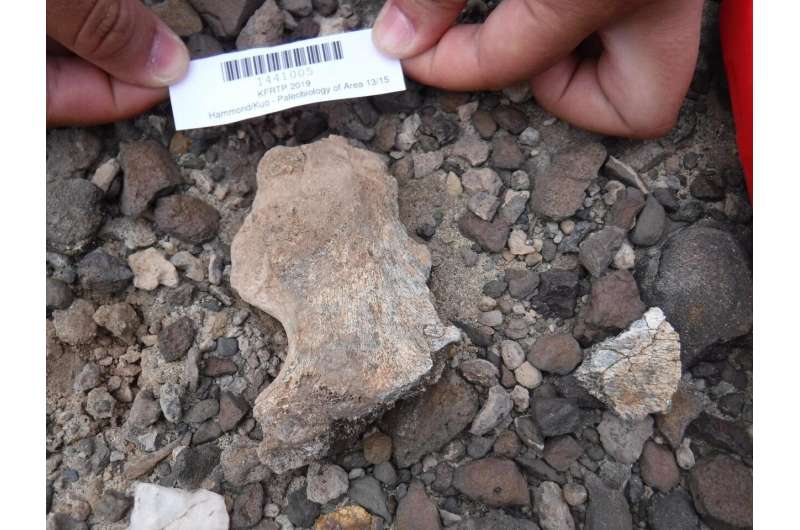 One of two new hominin specimens, a partial pelvis, found at the East Turkana site in Kenya. 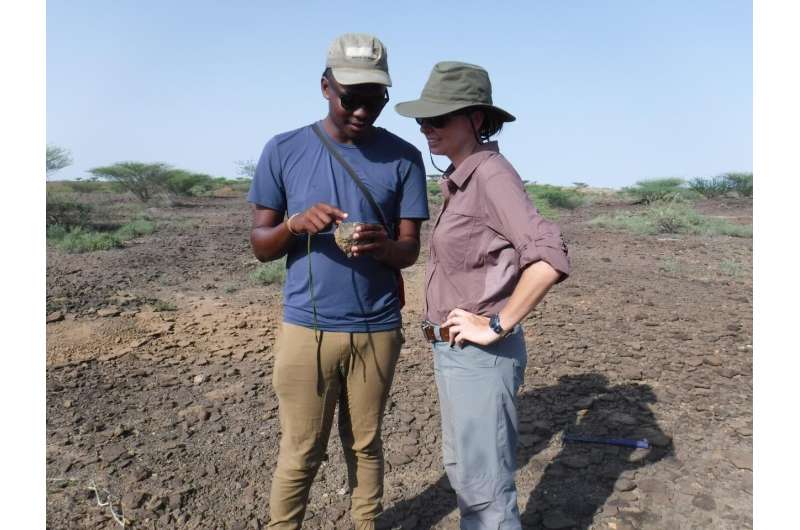 A new study verifies the age and origin of one of the oldest specimens of Homo erectus--a very successful early human who roamed the world for nearly 2 million years. In doing so, the researchers also found two new specimens at the site--likely the earliest pieces of the Homo erectus skeleton yet discovered. Details are published today in the journal Nature Communications.

"Homo erectus is the first hominin that we know about that has a body plan more like our own and seemed to be on its way to being more human-like," said Ashley Hammond, an assistant curator in the American Museum of Natural History's Division of Anthropology and the lead author of the new study. "It had longer lower limbs than upper limbs, a torso shaped more like ours, a larger cranial capacity than earlier hominins, and is associated with a tool industry--it's a faster, smarter hominin than Australopithecus and earliest Homo."

In 1974, scientists at the East Turkana site in Kenya found one of the oldest pieces of evidence for H. erectus: a small skull fragment that dates to 1.9 million years. The East Turkana specimen is only surpassed in age by a 2-million-year-old skull specimen in South Africa. But there was pushback within the field, with some researchers arguing that the East Turkana specimen could have come from a younger fossil deposit and was possibly moved by water or wind to the spot where it was found. To pinpoint the locality, the researchers relied on archival materials and geological surveys.

"It was 100 percent detective work," said Dan Palcu, a geoscientist at the University of São Paulo and Utrecht University who coordinated the geological work. "Imagine the reinvestigation of a 'cold case' in a detective movie. We had to go through hundreds of pages from old reports and published research, reassessing the initial evidence and searching for new clues. We also had to use satellite data and aerial imagery to find out where the fossils were discovered, recreate the 'scene,' and place it in a larger context to find the right clues for determining the age of the fossils."

Although located in a different East Turkana collection area than initially reported, the skull specimen was found in a location that had no evidence of a younger fossil outcrop that may have washed there. This supports the original age given to the fossil.

Within 50 meters of this reconstructed location, the researchers found two new hominin specimens: a partial pelvis and a foot bone. Although the researchers say they could be from the same individual, there's no way to prove that after the fossils have been separated for so long. But they might be the earliest postcrania--"below the head"--specimens yet discovered for H. erectus.

The scientists also collected fossilized teeth from other kinds of vertebrates, mostly mammals, from the area. From the enamel, they collected and analyzed isotope data to paint a better picture of the environment in which the H. erectus individual lived.

"Our new carbon isotope data from fossil enamel tell us that the mammals found in association with the Homo fossils in the area were all grazing on grasses," said Kevin Uno, a paleoecologist at Columbia University's Lamont-Doherty Earth Observatory. "The enamel oxygen isotope data suggest it was a relatively arid habitat based on comparisons to other enamel data from this area."

The work suggests that this early H. erectus was found in a paleoenvironment that included primarily grazers that prefer open environments to forest areas and was near a stable body of water, as documented by freshwater sponges preserved in the rocks.

ABOUT THE AMERICAN MUSEUM OF NATURAL HISTORY (AMNH)

The American Museum of Natural History, founded in 1869 and currently celebrating its 150th anniversary, is one of the world's preeminent scientific, educational, and cultural institutions. The Museum encompasses more than 40 permanent exhibition halls, including those in the Rose Center for Earth and Space, as well as galleries for temporary exhibitions. The Museum's approximately 200 scientists draw on a world-class research collection of more than 34 million artifacts and specimens, some of which are billions of years old, and on one of the largest natural history libraries in the world. Through its Richard Gilder Graduate School, the Museum grants the Ph.D. degree in Comparative Biology and the Master of Arts in Teaching (MAT) degree, the only such free-standing, degree-granting programs at any museum in the United States. The Museum's website, digital videos, and apps for mobile devices bring its collections, exhibitions, and educational programs to millions around the world. Visit amnh.org for more information.

Caption: One of two new hominin specimens, a partial pelvis, found at the East Turkana site in Kenya.