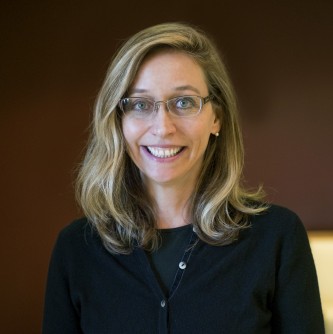 Newswise — BLOOMINGTON, Ind. -- Indiana University neuroscientist Andrea Hohmann took the stage at a press conference Nov. 14 in San Diego to discuss research conducted at IU that has found evidence that the brain’s cannabis receptors may be used to treat chronic pain without the side effects associated with opioid-based pain relievers or medical marijuana.

TThe study was discussed during the annual meeting of the Society for Neuroscience, the world’s largest source of emerging news about brain science and health. Hohmann was joined by three other international researchers whose work focuses on similar topics. (The event will be broadcast live online at http://cmcgc.com/DVD/sfn/SFN2016/006.html starting at 4:30 p.m. EST.)

"The most exciting aspect of this research is the potential to produce the same therapeutic benefits as opioid-based pain relievers without side effects like addiction risk or increased tolerance over time," said Hohmann, a Linda and Jack Gill Chair of Neuroscience and professor in the IU Bloomington College of Arts and Sciences' Department of Psychological and Brain Sciences.

Chronic pain is estimated to affect nearly 50 million adults in the United States. The rise in opioid-based pain relievers to treat chronic pain has also contributed to an opioid addiction epidemic in the United States, with 19,000 deaths linked to prescription opioid abuse in 2014. In Indiana, the use of needles associated with prescription opioid abuse led to a major HIV outbreak in the state’s southeastern region, prompting the governor to declare a public health emergency in 2015.

"The fact that deaths associated with prescription opioid abuse have surpassed cocaine and heroin overdose deaths combined is a significant factor in exploring cannabinoids as an alternative treatment for pain," said Richard Slivicki, a graduate student in Hohmann's lab who led the study. "It's a major epidemiological crisis, and one that helps motivate our work."

The IU study found that a compound that modulates the activity of the brain’s receptors for THC and endocannabinoids reduced chronic pain in mice. THC, or tetrahydrocannabinol, is the main psychoactive ingredient in marijuana; endocannabinoids are natural pain-relieving compounds released by the brain.

These modulating compounds, called positive allosteric modulators, or PAMs, work by binding to a recently discovered site on a cannabinoid receptor in the brain called CB1, which is different from the site that binds THC. The PAMs were synthesized by Ganesh A. Thakur at Northeastern University, who is a collaborator on the study.

The IU scientists specifically tested the effects of CB1 PAM on neuropathic pain, a type of chronic pain caused by nerve damage, which is estimated to affect as many as 40 percent of cancer patients as a side effect of chemotherapy. The scientists gave mice paclitaxel, a chemotherapy drug known to damage nerves and cause pain, and then treated them with CB1 PAM.

After receiving paclitaxel, mice became hypersensitive to both mechanical and cold stimulations to the paw, indicating increased pain. After treatment with the CB1 PAM, the mice behaved like normal mice that did not experience pain.

The study also found evidence that the use of CB1 PAM amplified the therapeutic effect of endocannabinoids without the negative side effects of a “marijuana high,” such as impaired motor function. The PAMs were administered in combination with a compound to increase endocannabinoid levels in the brain by preventing their breakdown in the body.

Moreover, the team found that the use of the CB1 PAM remained effective over time to prevent pain in mice, as opposed to THC and endocannabinoid breakdown inhibitors, both of which stopped working with repeated dosing.

"We found that the compound did not produce reward on its own, so it's unlikely that a CB1 PAM would be abused as a recreational drug," Hohmann added. "Our studies show that we can maintain or preserve therapeutic efficacy in ways that we haven’t seen with some of the other classes of analgesics that are used in the clinic."

The other scientists at the press conference, who were not involved in the study, were Sabrina Lisboa of the University of São Paolo, Brazil; Jason Clapper of Abide Therapeutics, San Diego; and Maria S. García-Gutiérrez of Miguel Hernandez University, Spain. The event was titled "Targeting the Brain’s Cannabinoid System."

Slivicki also attended the Society for Neuroscience meeting to deliver a poster presentation on the IU study. Abstracts of the paper are available to the press and conference attendees. The full paper is not yet published.

An additional news release on this research -- and the other three studies featured at the Neuroscience 2016 press conference -- will be available from the Society for Neuroscience news page at https://www.sfn.org/press-room/news-releases at 5:30 PM EST Nov. 14, 2016.