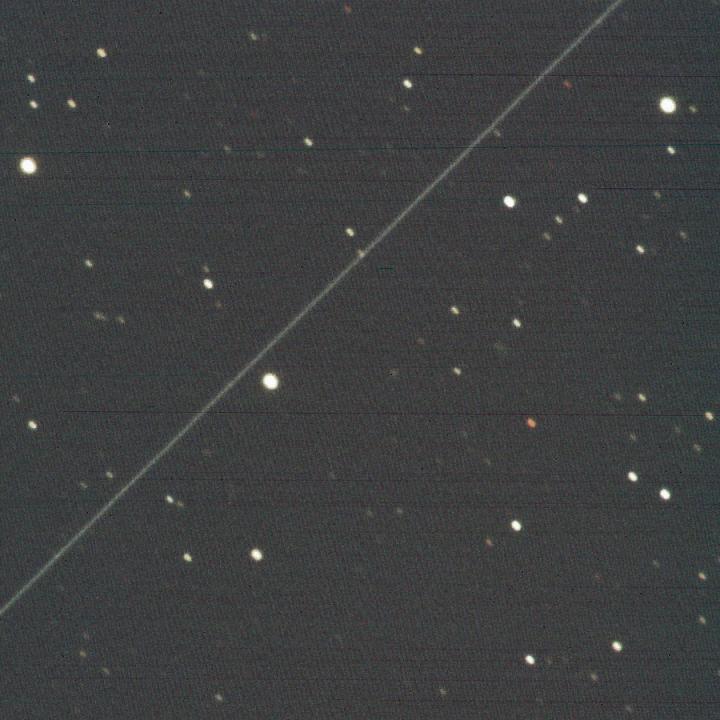 The trail of a Starlink satellite (the line from upper right to lower left) captured by the Murikabushi Telescope on April 10, 2020.

Newswise — Observations conducted by the Murikabushi Telescope of Ishigakijima Astronomical Observatory confirmed that dark coating can reduce satellite reflectivity by half. There are concerns that numerous artificial satellites in orbit could impair astronomical observations, but these findings may help alleviate such conditions.

Today's growing demand for space-based services has spawned a wave of satellite constellation projects which operate numerous artificial satellites in orbit. Since these satellites can shine by reflecting sunlight, the astronomy community has raised concerns about their potential impact on astronomical observations. In January 2020, SpaceX launched "DarkSat," an experimental satellite with an anti-reflective coating, and asked astronomers to assess how much this coating can reduce the satellite reflectivity. Brightness measurements of artificial satellites have already been conducted, but until now, there was no verification that a dark coating actually achieves the expected reflectivity reduction.

The Murikabushi Telescope of Ishigakijima Astronomical Observatory can observe celestial objects simultaneously in three different wavelengths (colors). Comparing multicolor data obtained under the same conditions provides more accurate insight into how much the coating can reduce the satellite brightness. Observations conducted from April to June 2020 revealed for the first time in the world that artificial satellites, whether coated or not, are more visible at longer wavelengths, and that the black coating can halve the level of surface reflectivity of satellites. Such surface treatment is expected to reduce the negative impacts on astronomical observations. Further measures will continue to be implemented to pave the way for peaceful coexistence between space industries and astronomy.