Research at UofL funded by The Michael J. Fox Foundation shows proteins produced by gut bacteria may cause misfolding of brain proteins and cerebral inflammation 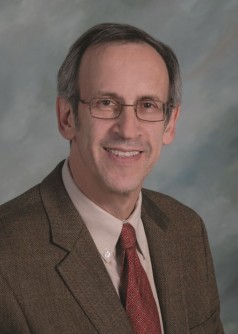 Newswise — LOUISVILLE, Ky. – Alzheimer’s disease (AD), Parkinson’s disease (PD) and Amyotrophic Lateral Sclerosis (ALS) are all characterized by clumped, misfolded proteins and inflammation in the brain. In more than 90 percent of cases, physicians and scientists do not know what causes these processes to occur.

Robert P. Friedland, M.D., the Mason C. and Mary D. Rudd Endowed Chair and Professor of Neurology at the University of Louisville School of Medicine, and a team of researchers have discovered that these processes may be triggered by proteins made by our gut bacteria (the microbiota). Their research has revealed that exposure to bacterial proteins called amyloid that have structural similarity to brain proteins leads to an increase in clumping of the protein alpha-synuclein in the brain. Aggregates, or clumps, of misfolded alpha-synuclein and related amyloid proteins are seen in the brains of patients with the neurodegenerative diseases AD, PD and ALS.

Alpha-synuclein (AS) is a protein normally produced by neurons in the brain. In both PD and AD, alpha-synuclein is aggregated in a clumped form called amyloid, causing damage to neurons. Friedland has hypothesized that similarly clumped proteins produced by bacteria in the gut cause brain proteins to misfold via a mechanism called cross-seeding, leading to the deposition of aggregated brain proteins. He also proposed that amyloid proteins produced by the microbiota cause priming of immune cells in the gut, resulting in enhanced inflammation in the brain.

Similar findings were noted in a related experiment in which nematodes (Caenorhabditis elegans) that were fed curli-producing E. coli also showed increased levels of AS aggregates, compared with nematodes not exposed to the bacterial amyloid. A research group led by neuroscientist Shu G. Chen, Ph.D., of Case Western Reserve University, performed this collaborative study.

This new understanding of the potential role of gut bacteria in neurodegeneration could bring researchers closer to uncovering the factors responsible for initiating these diseases and ultimately developing preventive and therapeutic measures.

“These new studies in two different animals show that proteins made by bacteria harbored in the gut may be an initiating factor in the disease process of Alzheimer’s disease, Parkinson’s disease and ALS,” Friedland said. “This is important because most cases of these diseases are not caused by genes, and the gut is our most important environmental exposure. In addition, we have many potential therapeutic options to influence the bacterial populations in the nose, mouth and gut.”

“We are pursuing studies in humans and animals to further evaluate the mechanisms of the effects we have observed and are exploring the potential for the development of preventive and therapeutic strategies,” Friedland said.

About The Michael J. Fox Foundation As the world's largest nonprofit funder of Parkinson's research, The Michael J. Fox Foundation is dedicated to accelerating a cure for Parkinson's disease and improved therapies for those living with the condition today. The Foundation pursues its goals through an aggressively funded, highly targeted research program coupled with active global engagement of scientists, Parkinson's patients, business leaders, clinical trial participants, donors and volunteers. In addition to funding more than $600 million in research to date, the Foundation has fundamentally altered the trajectory of progress toward a cure. Operating at the hub of worldwide Parkinson's research, the Foundation forges groundbreaking collaborations with industry leaders, academic scientists and government research funders, increases the flow of participants into Parkinson's disease clinical trials with its online tool, Fox Trial Finder, promotes Parkinson's awareness through high-profile advocacy, events and outreach, and coordinates the grassroots involvement of thousands of Team Fox members around the world. For more information, visit us on the Web , Facebook , Twitter , and LinkedIn.