STUDY: Despite Forest Loss, This African Protected Area Still has Potential To Support Tens of Thousands of Elephants, 1K Lions 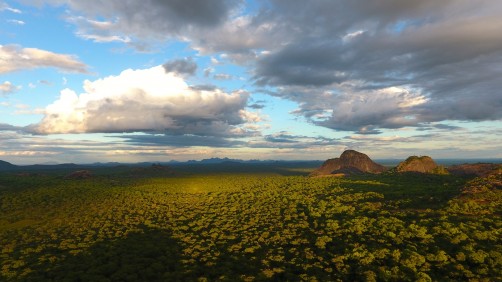 Despite some forest loss, Mozambique’s sprawling Niassa National Reserve has the potential to support tens of thousands of elephants and 1,000 lions.

Newswise — MAPUTO, Mozambique (November 30, 2017) – Despite some forest loss, Mozambique’s sprawling Niassa National Reserve has the potential to support tens of thousands of elephants and 1,000 lions according to a new land-use study published in the journal Parks.

The study, which monitored fine-scale temporal trends in land-use and tree cover, documented that the reserve lost some 108 square kilometers (41 square miles) of forest between 2001 and 2014 primarily due to agriculture and settlement along roads. While the loss is substantial, it represents less than 1 percent of all forest in the reserve. And it is lower than forest loss in surrounding regions, where adjacent districts lost 200 square kilometers (3.2 percent) of forest cover, and the two northern Mozambique Provinces containing Niassa lost 6,584 square kilometers (5.7 percent) of their forest cover outside of the reserve’s borders during the same time.

The findings for Niassa Reserve are particularly encouraging in the African context where deforestation rates are five times higher than the global average, and there are many examples of protected areas in Africa losing much more forest cover within their boundaries.

The authors say that the Niassa’s protected area status has helped save it from large-scale land clearing that has plagued outside areas, despite the fact that that forest governance in Mozambique is generally weak. The results of the study should be used to further engage with local communities, which have the right to live in the reserve according to Mozambique law.

Lead author James Allan from the University of Queensland in Australia said: “The fact that forest loss is much lower than in the surrounding region or in many other African protected areas is a very encouraging result.”

The study found that the reserve’s diverse Miombo woodland habitat is still intact, and with proper investment in best practice management could support large assemblages of megafauna. Though rampant poaching has impacted wildlife – particularly elephants – residual wildlife populations could recolonize. Niassa’s elephants have been decimated in recent years, with more than 8,000 animals poached in the last six years. The reserve currently holds approximately 800 lions, although there are localized declines in the population in some areas. Other threats loom in Niassa including artisanal mining, land-use change, bushmeat poaching, commercial poaching, wildfires, climate change, and selective logging.

The authors say that given the potentially substantial benefits to biodiversity conservation and broader societal goals, investing in the effective management of Niassa should be a global conservation priority. There are very few places remaining on the planet which can hold populations of large wildlife in the tens of thousands, and Niassa Reserve, with its connection to Selous Game Reserve in southern Tanzania, is one of these places.

James Bampton, WCS Mozambique Country Director said: “From a WCS Mozambique perspective, this research demonstrates just how important the Conservation Area network in Mozambique - particularly Niassa National Reserve - is for protecting forests and reducing deforestation. Reduced deforestation equates to reduced CO2 emissions and we are exploring how climate change funding could be used to support our active efforts to continue to keep deforestation rates low as intact forest ecosystems in Niassa support its outstanding and unique wildlife populations.”

MISSION: WCS saves wildlife and wild places worldwide through science, conservation action, education, and inspiring people to value nature. To achieve our mission, WCS, based at the Bronx Zoo, harnesses the power of its Global Conservation Program in nearly 60 nations and in all the world’s oceans and its five wildlife parks in New York City, visited by 4 million people annually. WCS combines its expertise in the field, zoos, and aquarium to achieve its conservation mission. Visit: newsroom.wcs.org Follow: @WCSNewsroom. For more information: +1 347-840-1242.

The USAID ECOSMART partnership has three objectives: 1) improve protected area management in the Niassa National Reserve (NNR) to conserve its biodiversity, 2) increase economic and social returns from the sustainable use of NNR's natural resources whilst ensuring equitable benefit sharing amount principle stakeholders, and 3) strengthen the national protected area system and conserve biodiversity with lessons learned from the NNR and other key Mozambican protected areas.