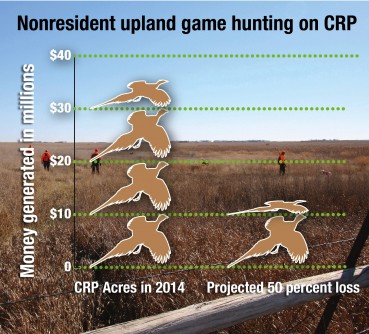 A 50 percent loss in CRP-funded acres would result in more than a 60 percent reduction in revenue from upland game hunting alone in South Dakota. 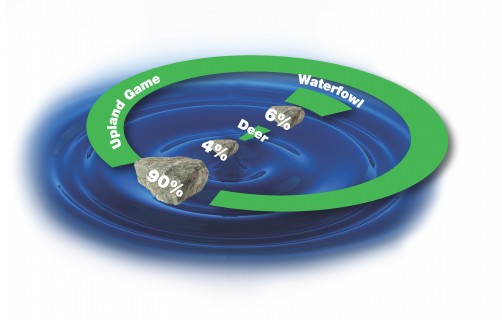 Upland game hunting accounts for more than $109 million, or 90 percent, in direct expenditures from nonresidents, while waterfowl hunting brings in $7 million, or 6 percent, and deer hunting, approximately $5.5 million, or 4 percent. The ripple effect of all three types of hunting adds another $72.7 million to the South Dakota economy.

Surveys were sent to 2,863 hunters who bought upland game, waterfowl and deer licenses for the 2014 season to assess the economic contribution, impacts and benefits of hunting in South Dakota. More than 39 percent of deer hunters, 35 percent of upland game hunters and 33 percent of waterfowl hunters returned their surveys.

Nonresident hunters spent more than $122 million in the 2014 season with 89 percent of that coming from upland game or pheasant hunting. More than $37.5 million was generated through nonresidents who hunted on CRP land, with upland game hunting accounting for nearly 95 percent, or $35.45 million, of those monies, which researchers refer to as economic impact.

Economic impact looks at the money nonresident hunters spend on everything from gas to food and lodging as well as licenses and shells, explained South Dakota State University assistant economics professor Michael Miller, who helped analyze the South Dakota data. The influx of “new money” would not have occurred if those hunters had not come to the state.

“We wanted to find out how much upland game, waterfowl and deer hunting depended on CRP land for two reasons. First, there is concern that CRP land is not being re-enrolled. Second, the perception exists that putting land into CRP and, thus, taking it out of agricultural production adversely affects the local economy,” said project manager John Loomis, a professor in Department of Agricultural and Resource Economics at Colorado State University. Data was also collected on North Dakota hunters through the $250,000 research project.

Calculating economic ripple effectResident and nonresident hunters reported slightly more than $282 million in direct expenditures. About 62 percent of those dollars—$175.7 million— came from upland game or pheasant hunting. In South Dakota, pheasant hunting is the most impactful, Miller said.

However, those direct expenditures don’t paint a complete picture of how those dollars reverberate within the state’s economy, Miller pointed out. To do that, the researchers analyzed the data using IMPLAN software, which considers indirect effects and induced effects.

Loomis describes it as throwing a rock into a pond, “there’s always that ripple effect.” The envelope of money that the hunter throws into the pond then ripples throughout other sectors of the economy.

The restaurants at which the hunters dine use those dollars to purchase supplies and to pay their employees. Those would be indirect effects, Miller explained. When those employees spend the money they earn for the things they need, those are induced effects.

“Eating at a restaurant, for instance, creates more ripples than buying sandwich meat and bread at a grocery store,” Loomis explained. The model also accounts for whether a baker in South Dakota makes the bread.

The analysis showed that the economic contribution from nonresident upland game bird hunting alone brings more than $63 million in economic benefits, with $32.4 million in wages associated with approximately 1,300 jobs. When resident upland game hunters are included, those figures increase to $87 million in economic benefits, $49 million in wages and 1,938 jobs. Estimating impact of CRP lossesAbout 56 percent of upland game bird hunters, 23 percent of deer hunters and 21 percent of waterfowl hunters surveyed hunted on CRP land. CRP, which began in 1985 and is administered by the Farm Service Agency, allows producers to remove marginal, environmentally sensitive land from production in return for a yearly payment. The goal is to return the land to perennial grassland to improve water quality, prevent erosion and provide wildlife habitat.

In 2014, more than 900,000 acres of land in South Dakota was enrolled in CRP. The 2015 farm bill set stricter guidelines for CRP and Conservation Reserve Enhancement Program and a program cap of 24 million acres nationwide by 2017. That cap is 1.4 million acres less than the acres enrolled in the nation’s CRP last year, the lowest since 1988.

Miller hopes this information will be useful to legislators and policymakers. “We’re a small state and this is a big impact.”