Study Finds Age-Related Effects in MS may be Reversible 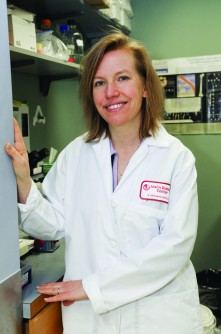 Newswise — BOSTON – January 6, 2012 – Scientists at Joslin Diabetes Center, Harvard University, and the University of Cambridge have found that the age-related impairment of the body’s ability to replace protective myelin sheaths, which normally surround nerve fibers and allow them to send signals properly, may be reversible, offering new hope that therapeutic strategies aimed at restoring efficient regeneration can be effective in the central nervous system throughout life.

In a proof-of-principle study published in the journal Cell Stem Cell, the researchers report that defects in the regeneration of the myelin sheaths surrounding nerves, which are lost in diseases such as multiple sclerosis may be at least partially corrected following exposure of an old animal to the circulatory system of a young animal. Myelin is a fatty substance that protects nerves and aids in the quick transmission of signals between nerve cells.

Using a surgical technique, the researchers introduced an experimental demyelinating injury in the spinal cord of an old mouse, creating small areas of myelin loss, and then exposed those areas to cells found the blood of a young mouse. By doing so, they found that the influx of certain immune cells, called macrophages, from the young mouse helped resident stem cells restore effective remyelination in the old mouse’s spinal cord. This “rejuvenating” effect of young immune cells was mediated in part by the greater efficiency of the young cells in clearing away myelin debris created by the demyelinating injury. Prior studies have shown that this debris impedes the regeneration of myelin.

“Aging impairs regenerative potential in the central nervous system,” says author Amy J. Wagers, PhD, an associate professor of stem cell and regenerative biology at Harvard University and Joslin, who co-led the study with Professor Robin Franklin, director of the MS Society’s Cambridge Centre for Myelin Repair at the University of Cambridge. “This impairment can be reversed, however, suggesting that the eventual development of cell-based or drug-based interventions that mimic the rejuvenation signals found in our study could be used therapeutically.”

This could be particularly useful, she adds, in treating MS, which typically spans many decades of life, and thus is likely to be influenced by age-dependent reductions in the ability of myelin to regenerate. In MS, the body’s own immune system attacks the myelin sheath and prevents nerve fibers in the brain from sending signals properly, which can cause mild symptoms such as limb numbness or more serious ones like losing the ability to walk or speak. As people with MS age, remyelination decreases significantly, eventually causing permanent loss of nerve fibers.

“For MS sufferers,” says Franklin, “this means that, in theory, regenerative therapies will work throughout the duration of the disease. Specifically, it means that remyelination therapies do not need to be based on stem cell transplantation since the stem cells already present in the brain and spinal cord can be made to regenerate myelin, regardless of a person’s age.”

Other Joslin co-authors of the study were Tata Nageswara Rao and Jennifer L. Shadrach.

Joslin Diabetes Center, located in Boston, Massachusetts, is the world's preeminent diabetes research and clinical care organization. Joslin is dedicated to ensuring that people with diabetes live long, healthy lives and offers real hope and progress toward diabetes prevention and a cure. Joslin is an independent, nonprofit institution affiliated with Harvard Medical School.

Keep up with Joslin research and clinical news at Inside Joslin at www.joslin.org/news/inside_joslin.html,

Become a fan of Joslin on Facebook at www.facebook.com/joslindiabetes