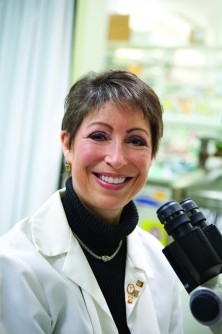 Mary Loeken, PhD, is an Investigator in the Section on Islet Cell & Regenerative Biology at the Joslin Diabetes Center and an Associate Professor of Medicine at the Harvard Medical School.

Newswise — BOSTON – October 17, 2011-- In a paper published today in Diabetologia, a team at Joslin Diabetes Center, headed by Mary R. Loeken, PhD, has identified the enzyme AMP kinase (AMPK) as key to the molecular mechanism that significantly increases the risk of neural tube defects such as spina bifida and some heart defects among babies born to women with diabetes.

Even if women with diabetes—either type 1 or type 2— work vigilantly to control their blood sugar levels around the time of conception, the risk of a defect is still twice that of the general population. This finding could lead to strategies to interfere with the mechanism and reduce the chances of such birth defects occurring.

Previous studies published by Loeken's lab showed that maternal hyperglycemia (high blood sugar) causes oxidative stress in the embryo, and inhibits expression of the Pax3 gene. Pax3 is essential to the formation of the neural tube, which in the embryo is the precursor to the brain and spinal cord. Oxidative stress results when oxidized molecules – called free radicals – are created faster than they can be eliminated.

However, Loeken said, it was not known how the cells that express Pax3 could sense the oxidative stress and why oxidative stress, which occurs throughout the embryo, only damages selective structures such as the neural tube.

In the paper published today, Loeken’s team identifies the key to the process as AMP kinase, which is activated by oxidative stress and was found to signal the cell nucleus to block the expression of Pax3.

“The stimulation of a metabolism-sensing enzyme that can regulate specific genes explains how oxidative stress, which is generated throughout the embryo during maternal hyperglycemia, causes malformation of specific embryo structures,” Loeken said.

“We now know that we must do whatever we can to prevent AMPK from being stimulated,” said Loeken, who is a research investigator in Joslin’s Section on Islet Cell and Regenerative Biology.

Trying to keep the mother’s blood glucose levels under control is currently the only way to do that, she noted. “That’s the best we can do right now,” she said. But armed with the findings of this study, she noted, other researchers may be able to come up with drugs or other strategies to inhibit AMPK activity,

Dr. Loeken added, however, that formulating a strategy could be tricky because it is not known if interfering with AMPK activity -- while a good thing in preventing neural tube birth defects -- might also have negative effects on the embryo.

In their study Loeken and her group, including Yichao Wu, Marta Viana, and Shoba Thirumangalathu, used mice and cell lines to test their hypothesis that AMPK might be stimulated in the embryo and that stimulation of AMPK was responsible for blocking Pax3 expression and causing neural tube defects in response to high glucose.

“We found in this study that AMPK is stimulated in embryo by both high glucose and oxidative stress,” Loeken said.

The study used interventions including a drug that activates AMPK and another that blocks it. The paper showed that a drug that increased AMPK activity mimics the effects of oxidative stress to inhibit expression of Pax3, thus inducing neural tube defects.

This research was supported by a grant from the National Institutes of Health.

Joslin Diabetes Center is the world's preeminent diabetes research and clinical care organization. Joslin is dedicated to ensuring that people with diabetes live long, healthy lives and offers real hope and progress toward diabetes prevention and a cure. Founded in 1898 by Elliott P. Joslin, M.D., Joslin is an independent, nonprofit institution affiliated with Harvard Medical School. For more information about Joslin, visit www.joslin.org. Keep up with Joslin research and clinical news at Inside Joslin at www.joslin.org/news/inside_joslin.html, friend Joslin on Facebook at www.facebook.com/joslindiabetes and follow on Twitter at www.twitter.com/JoslinDiabetes.