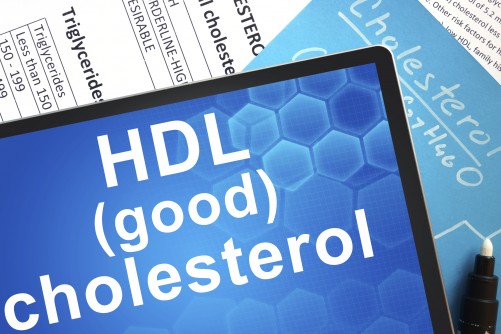 People with high levels of good cholesterol, or high-density lipoprotein, are not as safe from heart disease when high levels of a newly identified biomarker of inflammation in the arteries are also found in their bloodstream, according to a new study.

Newswise — People with high levels of good cholesterol, or high-density lipoprotein, are not as safe from heart disease when high levels of a newly identified biomarker of inflammation in the arteries are also found in their bloodstream, according to a new study.

In the study of nearly 3,000 patients, researchers from the Intermountain Medical Center Heart Institute in Salt Lake City discovered that the presence of high levels of the biomarker glycoprotein acetylation, or GlycA, was associated with an increased risk of heart attack or stroke.

Inflammation of the artery walls is a contributing factor to heart attack and stroke because it increases the likelihood that plaque on the arterial walls will rupture, induce clot formation and block blood flow.

“We already know that HDL provides an anti-inflammatory effect on the arteries,” said Brent Muhlestein, MD, co-director of cardiovascular research at the Intermountain Medical Center Heart Institute. “But our research suggests there’s an interaction between GlycA and small HDL particles that reduces the anti-inflammatory capabilities of HDL and increases a person’s chances of having a heart attack or stroke.”

Results of the study will be presented at the American College of Cardiology Scientific Sessions in Chicago on Saturday, April 2, at 2:45 p.m., CDT.

Using a test developed by LipoScience known as NMR spectroscopy, researchers measured lipoprotein particles and GlycA in 2,848 patients whose average age was 63 years old. Sixty-six percent of the patients were male and 65 percent had coronary artery disease.

“The results of our study reinforce the importance of the recommendations we offer to our patients working to reduce inflammation in their arteries by exercising regularly and eating heart-healthy foods,” said Dr. Muhlestein. “Some ways of increasing the HDL levels that will provide the anti-inflammatory protection include eating foods higher in Omega 3s and following the Mediterranean diet, which revolves around plant-based foods, healthy fats, and limited amounts of salt and red meat.”

However, researchers are currently seeking to determine if C-reactive protein and GlycA are completely independent of each other in terms of their impact on inflammation and heart disease.

“GlycA is a new particle we didn’t know much about, but now that we know there are epidemiologic associations, we need to look at additional ways to evaluate and understand the way it functions and interacts in the bloodstream,” said Dr. Muhlestein.

Intermountain Medical Center is the flagship facility for the Intermountain Healthcare system, which is based in Salt Lake City.