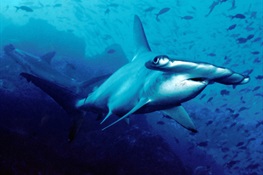 1. Study Finds Female and Immature Hammerhead Sharks Need More Protection
2. From January to December 2017, researchers from WCS (Wildlife Conservation Society) gathered data on scalloped hammerhead sharks landed at Kutaraja fishing port in Banda Aceh, Aceh Province, to understand the characteristics of the fisheries, and inform the design of potential management options.
3. The data revealed that hammerheads are caught both deliberately and as bycatch, and that the majority of landed individuals are immature, with more females captured than males, indicating the need to introduce fisheries management rules to alleviate pressure on this species, and in particular to prevent negative impacts on reproductive capacity due to skewed capture of females.