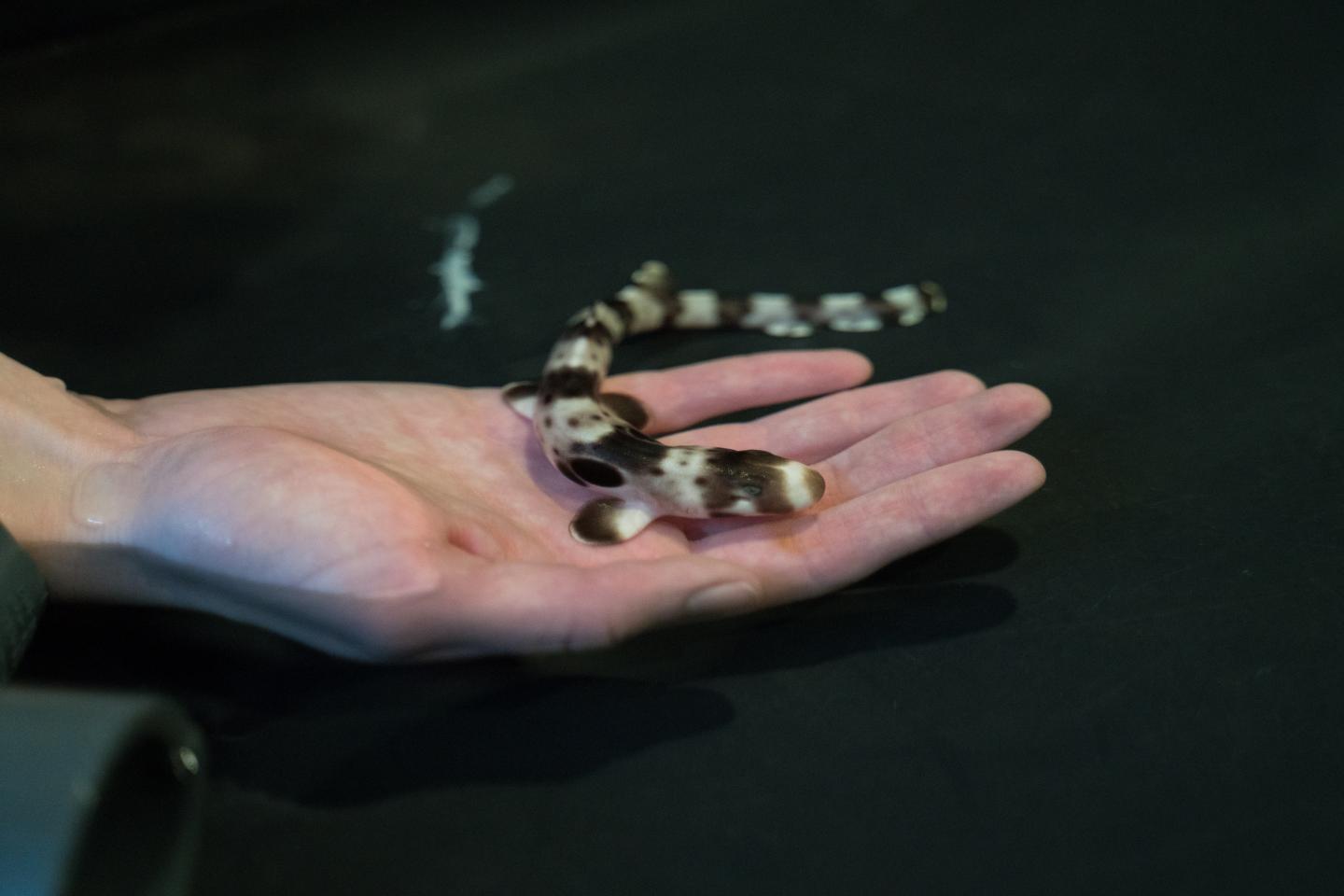 Newswise — A new study conducted at the New England Aquarium finds that as climate change causes the ocean to warm, baby sharks are born smaller, exhausted, undernourished, and into environments that are already difficult for them to survive in.

In a recently published paper in the journal Scientific Reports, lead author Carolyn Wheeler, a Ph.D. candidate at the University of Massachusetts Boston and at the ARC Centre of Excellence for Coral Reef Studies at James Cook University, examined the effects of increased temperatures on the growth, development and physiological performance of epaulette sharks--an egg-laying species found only on the Great Barrier Reef. Wheeler studied the sharks as embryos and hatchlings, under the supervision of Dr. John Mandelman, Vice President and Chief Scientist of the Anderson Cabot Center for Ocean Life at the New England Aquarium.

"We found that the hotter the conditions, the faster everything happened, which could be a problem for the sharks," said Wheeler. "The embryos grew faster and used their yolk sac quicker, which is their only source of food as they develop in the egg case. This led to them hatching earlier than usual." Wheeler said the hatchlings were not only smaller, but they needed to feed almost immediately while lacking significant energy.

"The ocean faces increasing threats from humans, such as the effects of climate change, and it is vital to conduct scientific research to help strengthen the management and protection of those ocean species most negatively impacted and vulnerable," Mandelman said. "In this case, we addressed a pressing threat--ocean warming--and the potential impacts on a species that could serve as a model for other egg laying species among sharks and their relatives."

The Aquarium has a successful breeding program for epaulette sharks, allowing the researchers to use some of the eggs to study climate change impacts on a shark species native to the other side of the world. The research was housed at the Aquarium's Animal Care Center in Quincy, Mass. under the direction of Barbara Bailey, Curator of Husbandry and Sustainability.

"This work included the efforts of staff, volunteers and interns across a number of departments. I was very excited to find a connection between the animals in our exhibits and the opportunity to contribute to an incredibly important scientific study," said Bailey.

Co-author and Associate Professor Jodie Rummer, Wheeler's co-supervisor at James Cook University, says the waters of the Great Barrier Reef will likely experience summer averages nearing or even exceeding 31°C/87.8°F by the end of the century. Sharks do not care for their eggs after they are laid, meaning a shark egg must be able to survive unprotected for up to four months. Rummer cites rising ocean temperatures as a major concern for the future of sharks, particularly those that lay eggs.

"The epaulette shark is known for its resilience to change, even to ocean acidification. So, if this species can't cope with warming waters, then how will other, less tolerant species fare?" Rummer said.

Sharks and the class of animals they belong to, which includes rays and skates, are slow growing. They also do not reproduce often compared to other fishes. The populations of many of these creatures are already threatened across the globe. The study suggests the sharks of the future will be born--or hatch, in this case--not only at a disadvantage but into environments already at the warmest they can tolerate.

Epaulette sharks reared through the New England Aquarium's husbandry and sustainability program can be seen on exhibit in the Shark and Ray Touch Tank at the Aquarium's main building on Boston's Central Wharf. The Aquarium is currently closed to the public as part of the City of Boston's restrictions to slow the spread of COVID-19.