Newswise — Ithaca, NY—After pairing up and raising chicks, males and females of some bird species spend their winter break apart. At the end of their journey to Central or South America, you might find mostly males in one habitat, and females in another. Yet conservation strategies have typically overlooked the habitats needed by females, putting already-declining species in even more peril, according to a new study in the journal Biological Conservation.

"Among the small songbird species that have been studied, the general rule seems to be that females occupy lower elevation, shrubbier, drier sites," says lead author Ruth Bennett. "Mid-elevation and high-elevation sites that are more humid and have better quality forest are occupied by males." Bennett conducted the research while at Cornell University and is now a postdoctoral researcher at the Smithsonian Migratory Bird Center.

This male-female split is pretty common, Bennett says, but the study found that in conservation plans for 66 declining migratory species, only 3 made any mention of his-and-her-habitats—those being plans for Golden-winged Warbler, Bicknell’s Thrush, and Back-capped Vireo. Bennett concludes that female birds are definitely being overlooked.

"When conservation plans don’t explicitly address the habitat requirements of both sexes, there’s no guarantee both sexes will be protected. Overlooking habitats females use can lead to unforeseen population loss, which is especially critical for species of conservation concern," says Bennett.

"Our research is an important reminder that ‘one size fits all’ conservation does not accommodate the needs of both male and female birds any more than a one-size-fits-all approach would work in meeting the needs of all genders at work and at home," adds co-author Amanda Rodewald, senior director of Conservation Science at the Cornell Lab of Ornithology.

Using declining Golden-winged Warblers as their case study, the researchers also found that the habitats where female birds spend the winter are being lost more rapidly than those inhabited by males. Field crews surveyed more than 1,100 locations for the warblers during 3 wintering seasons in Guatemala, Belize, Honduras, Nicaragua, and Panama. Researchers then used Global Forest Watch data to see what percentage of areas with the most birds had been deforested between 2000 and 2016. Male golden-wings lost 4% of their habitat during that time span. Females lost twice as much, at 8%. Despite the higher threat faced by females, the study found that habitats for the males got all the conservation attention.

"To counteract the bias in favor of male birds, researchers and conservation planners need to identify and report the sex of birds, model female distributions, and include female habitats in conservation plans," says Bennett.

Female birds are often harder find with their muted colors, and both sexes are quieter while on their wintering locations. But making the effort to consider the needs of female birds could pay off in the long run.

"Yes, it requires more investment and care on the survey portion of any conservation effort when you’re trying to acquire information to guide action," Rodewald says. "But that could actually allow us to be much more strategic and save money on the back end. Conservation plans are stronger—and more likely to be effective—when they explicitly consider the needs of females.”

Editors: Download images and graphic. The images are protected by copyright and use is permitted only within stories about the content of this release. Redistribution or any other use is prohibited without express written permission of the Cornell Lab of Ornithology or the copyright owner. 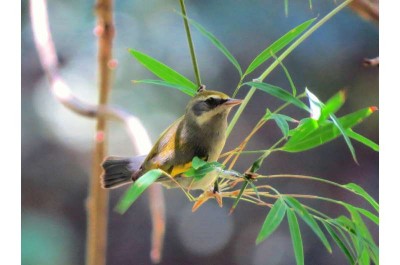 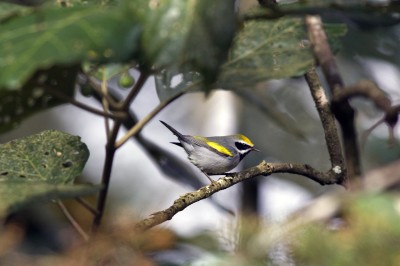 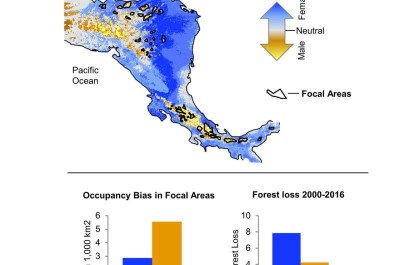 Caption: This graphic highlights the different locations in Central America where study surveys found male and female Golden-winged Warblers spent the winter months. There is bias toward male habitats within conservation focal areas but higher rates of deforestation in the core of the female range.