The study found that the active ingredient glyphosate exacerbated convulsions in C. elegans and suggest the GABA-A receptor as a neurological target for the observed physiological changes. 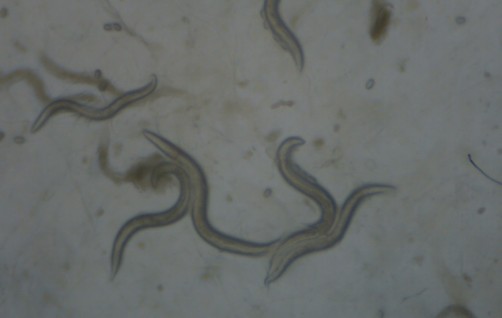 Using C. elegans, a soil-dwelling roundworm, researchers first tested glyphosate alone and then both the U.S. and U.K. formulations of Roundup® from two distinct time periods. 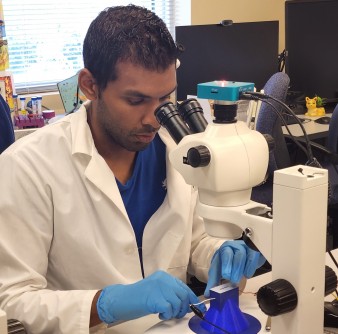 Akshay S. Naraine, MSc., project lead and a Ph.D. student at FAU and the International Max Planck Research School for Synapses and Circuits.

Newswise — A recent report by the United States Centers for Disease Control and Prevention found more than 80 percent of urine samples from children and adults in the U.S. contained the herbicide glyphosate. A study by Florida Atlantic University and Nova Southeastern University takes this research one step further and is the first to link the use of the herbicide Roundup®, a widely used weed killer, to convulsions in animals.

Glyphosate, the weed killer component in Roundup®, is the world’s most commonly used herbicide by volume and by land-area treated. Glyphosate-resistant crops account for almost 80 percent of transgenic crop cultivated land, which has resulted in an estimated 6.1 billion kilos of glyphosate sprayed across the world from 2005 to 2014. Roundup® is used at both industrial and consumer levels, and its use is projected to dramatically increase over the coming years. A major question, yet to be fully understood, is the potential impact of glyphosate on the nervous system.

“It is concerning how little we understand the impact of glyphosate on the nervous system,” said Akshay S. Naraine, MSc., project lead and a Ph.D. student at FAU and the International Max Planck Research School for Synapses and Circuits. “More evidence is mounting for how prevalent exposure to glyphosate is, so this work hopefully pushes other researchers to expand on these findings and solidify where our concerns should be.”

Results, published in Scientific Reports, showed that glyphosate and Roundup® increased seizure-like behavior in soil-dwelling roundworms and provides significant evidence that glyphosate targets GABA-A receptors. These communication points are essential for locomotion and are heavily involved in regulating sleep and mood in humans. What truly sets this research apart is that it was done at significantly less levels than recommended by the EPA and those used in past studies.

“The concentration listed for best results on the Roundup® Super Concentrate label is 0.98 percent glyphosate, which is about 5 tablespoons of Roundup® in 1 gallon of water,” said Naraine. “A significant finding from our study reveals that just 0.002 percent glyphosate, a difference of about 300 times less herbicide than the lowest concentration recommended for consumer use, had concerning effects on the nervous system.”

Using C. elegans, a soil-dwelling roundworm, researchers first tested glyphosate alone and then both the U.S. and United Kingdom formulations of Roundup® from two distinct time periods – before and after the U.K.’s 2016 ban on polyethoxylated tallowamine (POEAs). These conditions were selected to pinpoint which effects are specific to the active ingredient glyphosate, Roundup® formulations in general, the POEAs surfactants, or any combination of these.

The study found that the active ingredient glyphosate exacerbated convulsions in C. elegans and suggest the GABA-A receptor as a neurological target for the observed physiological changes. The data also indicate that there is an important distinction between exposure to glyphosate and Roundup®, with Roundup® exposure increasing the percentage of C. elegans that did not recover from seizure activity. The non-recovery phenotype and prolonged convulsions in C. elegans from this study have helped to set a foundation for understanding  nuanced physiological effects of herbicide that occur at concentrations exponentially below neurotoxic levels.

“Given how widespread the use of these products is, we must learn as much as we can about the potential negative impacts that may exist,” said Ken Dawson-Scully, Ph.D., lab head, professor, senior vice president and associate provost, Division of Research and Economic Development, Nova Southeastern University. “There have been studies done in the past that showed the potential dangers, and our study takes that one step further with some pretty dramatic results.”

“These roundworms undergo convulsions under thermal stress, and our data strongly implicates glyphosate and Roundup® exposure in exacerbating convulsive effects. This could prove vital as we experience the effects of climate change,” said Naraine.

This study provides evidence to further investigate how chronic exposure and accumulation may lead to neurodegenerative diseases such as Parkinson’s disease. Importantly, there also is a sub-neurodegenerative threshold that may dramatically impact dysregulation of neurotransmission.

“As of now, there is no information for how exposure to glyphosate and Roundup® may affect humans diagnosed with epilepsy or other seizure disorders,” said Dawson-Scully. “Our study indicates that there is significant disruption in locomotion and should prompt further vertebrate studies.”

Study co-authors are Venkatesh Shanbhag, Ph.D., lead chemist and professor of chemistry, Halmos College of Arts and Sciences, NSU; Rebecca Aker who was a master’s student at FAU while contributing to this research; and Isis Sweeney, Meghan Kalvey and Alexis Surtel, undergraduate students who contributed at FAU.

About Nova Southeastern University (NSU): At NSU, students don’t just get an education, they get the competitive edge they need for real careers, real contributions and real life. A dynamic, private research university, NSU is providing high-quality educational and research programs at the undergraduate, graduate, and professional degree levels. Established in 1964, the university includes 14 colleges, the “theme park” for start-ups, scale-ups , and entrepreneurs, the Alan B. Levan | NSU Broward Center of Innovation, the 215,000-square-foot Center for Collaborative Research, the private PK1-12 grade University School, the world-class NSU Art Museum Fort Lauderdale, and the Alvin Sherman Library, Research and Information Technology Center, one of Florida’s largest public libraries. NSU students learn at our campuses in Fort Lauderdale, Fort Myers, Jacksonville, Miami, Miramar, Orlando, Palm Beach, and Tampa, Florida, as well as San Juan, Puerto Rico, and online globally. With more than 200,000 alumni across the globe, the reach of the NSU community is worldwide.  Classified as having “high research activity” by the Carnegie Foundation for the Advancement of Teaching, NSU is one of only 59 universities nationwide to also be awarded Carnegie’s Community Engagement Classification, and is also the largest private institution in the United States that meets the U.S. Department of Education’s criteria as a Hispanic-serving Institution. Please visit www.nova.edu for more information.