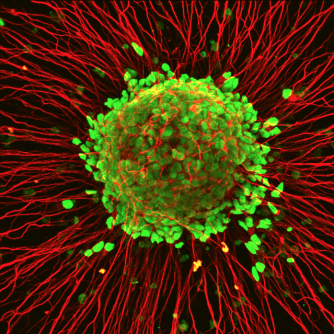 In this microscope photo of motor neurons created in the laboratory of Su-Chun Zhang at the University of Wisconsin-Madison, green marks the nucleus, and red marks the nerve fibers. Zhang and co-workers at the Waisman Center have identified a misregulation of protein in the nucleus as the likely first step in the pathology of ALS, a fatal neurological disorder that blocks nerve signals to the muscles, and later causes motor neurons to die.

Newswise — MADISON, Wis. — By studying nerve cells that originated in patients with a severe neurological disease, a University of Wisconsin-Madison researcher has pinpointed an error in protein formation that could be the root of amyotrophic lateral sclerosis.

Also called Lou Gehrig's disease, ALS causes paralysis and death. According to the ALS Association, as many as 30,000 Americans are living with ALS.

After a genetic mutation was discovered in a small group of ALS patients, scientists transferred that gene to animals and began to search for drugs that might treat those animals. But that approach has yet to work, says Su-Chun Zhang, a neuroscientist at the Waisman Center at UW-Madison, who is senior author of the new report, published April 3 in the journal Cell Stem Cell.

Zhang has been using a different approach — studying diseased human cells in lab dishes. Those cells, called motor neurons, direct muscles to contract and are the site of failure in ALS.

About 10 years ago, Zhang was the first in the world to grow motor neurons from human embryonic stem cells. More recently, he updated that approach by transforming skin cells into iPS (induced pluripotent stem) cells that were transformed, in turn, into motor neurons.

IPS cells can be used as “disease models,” as they carry many of the same traits as their donor. Zhang says the iPS approach offers a key advantage over the genetic approach, which "can only study the results of a known disease-causing gene. With iPS, you can take a cell from any patient, and grow up motor neurons that have ALS. That offers a new way to look at the basic disease pathology."

In the new report, Zhang, Waisman scientist Hong Chen, and colleagues have pointed a finger at proteins that build a transport structure inside the motor neurons. Called neurofilament, this structure moves chemicals and cellular subunits to the far reaches of the nerve cell. The cargo needing movement includes neurotransmitters, which signal the muscles, and mitochondria, which process energy.

Motor neurons that control foot muscles are about three feet long, so neurotransmitters must be moved a yard from their origin in the cell body to the location where they can signal the muscles, Zhang says. A patient lacking this connection becomes paralyzed; tellingly, the first sign of ALS is often paralysis in the feet and legs.

Scientists have known for some time that in ALS, "tangles" along the nerve’s projections, formed of misshapen protein, block the passage along the nerve fibers, eventually causing the nerve fiber to malfunction and die. The core of the new discovery is the source of these tangles: a shortage of one of the three proteins in the neurofilament.

The neurofilament combines structural and functional roles, Zhang says. "Like the studs, joists and rafters of a house, the neurofilament is the backbone of the cell, but it's constantly changing. These proteins need to be shipped from the cell body, where they are produced, to the most distant part, and then be shipped back for recycling. If the proteins cannot form correctly and be transported easily, they form tangles that cause a cascade of problems."

Finding neurofilament tangles in an autopsy of an ALS patient "will not tell you how they happen, when or why they happen," Zhang says. But with millions of cells — all carrying the human disease — to work with, Zhang's research group discovered the source of the tangles in the protein subunits that compose the neurofilaments. "Our discovery here is that the disease ALS is caused by misregulation of one step in the production of the neurofilament," he says.

Beyond ALS, Zhang says "very similar tangles" appear in Alzheimer's and Parkinson's diseases. "We got really excited at the idea that when you study ALS, you may be looking at the root of many neurodegenerative disorders."

While working with motor neurons sourced in stem cells from patients, Zhang says he and his colleagues saw "quite an amazing thing. The motor neurons we reprogrammed from patient skin cells were relatively young, and we found that the misregulation happens very early, which means it is the most likely cause of this disease. Nobody knew this before, but we think if you can target this early step in pathology, you can potentially rescue the nerve cell."

In the experiment just reported, Zhang found a way to rescue the neural cells living in his lab dishes. When his group "edited" the gene that directs formation of the deficient protein, "suddenly the cells looked normal," Zhang says.

Already, he reports, scientists at the Small Molecule Screening and Synthesis Facility at UW-Madison are looking for a way to rescue diseased motor neurons. These neurons are made by the millions from stem cells using techniques that Zhang has perfected over the years.Zhang says "libraries" of candidate drugs, each containing a thousand or more compounds, are being tested. "This is exciting. We can put this into action right away. The basic research is now starting to pay off. With a disease like this, there is no time to waste." ###