Newswise — In 1999, a routine study for a pipeline in Tazewell County, Virginia, led to a surprising discovery. Researchers spotted tiny minnows with a black stripe and yellow fins, similar in size and skeletal structure to the Laurel dace, a species native to Tennessee. Further sampling, however, revealed that these minnows were actually a separate species.

Named for the upper Clinch River basin where they were discovered, the Clinch dace have been extensively studied since 2005. The most recent study, conducted by researchers in Virginia Tech’s College of Natural Resources and Environment, offers suggestions for further methods of study and conservation efforts.

The study, published in the Journal of Fish and Wildlife Management, compiles data collected on the Clinch dace from 70 stream segments in Tazewell and Russell counties. The fish, which grow to roughly 2 inches in length, are typically found in forested streams. They prefer to nest in gravel depressions built by larger fish like creek chubs and stonerollers, which provide well-oxygenated nests for their eggs to develop.

Lead author Michael Moore, who earned his master’s in fish and wildlife conservation in 2016, worked in the field collecting data on the Clinch dace during the summers of 2014 and 2015.

“Conducting field work and searching for new populations is like a treasure hunt,” he said. “You get to test your predictions, and every time you find a new population, it’s exciting because you know the species has a little better chance of surviving.”

Moore and a team of undergraduate students divided each stream into four 50-meter sections. In two sections, they used cloth mesh minnow traps to capture fish. In the other two stream segments, they used electrofishing, a technique that sends a small electrical pulse into the water to disrupt the fish and make them swim to the surface.

In order to accurately describe the current distribution of the species and minimize the risk of concluding false absences, each stream was surveyed twice. Moore kept a list of every fish caught, paying special attention to whether the Clinch dace was found. Using these data, he was able to develop a statistical model to predict the likelihood of discovering the Clinch dace in a particular stream.

The results of the study were somewhat bittersweet. Moore, who is now a doctoral student at the University of Missouri, explained that electrofishing proved to be the most effective method of finding the Clinch dace, but even then, detection is difficult because of the species’ rarity.

Currently, the Clinch dace is in the highest tier of the Virginia Department of Game and Inland Fisheries’ Tiers of Imperilment for all wildlife species found in the state. According to Mike Pinder, an aquatic biologist with the agency, that means that conservation efforts are vital.

“Even though we live in a time when we think everything has been discovered, we’re still finding new species right here in Virginia,” he said. “If we didn’t do this work, this species may have been gone soon after it was discovered.”

Pinder added that because it takes very little to disrupt a Clinch dace population, the species can serve as a good indicator of water quality in an area. Because Clinch dace live in small streams and headwaters, their presence can give clues to the quality of water that ultimately flows into larger rivers and streams around the state.

“A single disturbance like a chemical spill can wipe out an entire generation of these fish, so they can serve as biomonitoring tools,” he said. “If they’re present in a water system, it’s a good indication that the water system is healthy. If you see them declining, there may be something wrong.”

Co-author Donald Orth, the Thomas H. Jones professor of fish and wildlife conservation, noted that there are many things that can be done to help protect Clinch dace populations in the area.

“Forested areas near the streams protect the waterway, prevent erosion, and provide shade that keeps the water cool, so any permits that would allow renewed or expanded timber harvesting or surface mining should be scrutinized to make sure they avoid changing the forest cover or water quality,” he said.

Orth also explained that instituting a monitoring program for the existing populations would help researchers track how the species persists over time and determine if additional conservation or restoration efforts should be added.

Currently, Rebecca Bourquin, of Manahawkin, New Jersey, a master’s student in fish and wildlife conservation, is collecting DNA samples from eight Clinch dace populations noted in the study to determine their genetic similarities and differences. Bourquin hopes that her research will help researchers and conservationists augment existing populations to prevent further extinctions.

“We wouldn’t want to take one population and add it into another if they’re too genetically dissimilar, so I’m trying to determine whether we can do any sort of translocation and increase some of those smaller population sizes,” she explained.

In addition to offering recommendations for further study and conservation efforts, the researchers also took time to educate the local community, including elementary and middle school students, about the Clinch dace and its importance to the local ecosystem.

“All of these streams are owned by private landowners, so working with them to develop conservation practices is going to be vital,” Orth said. “Most of the people we spoke to are really proud and excited that they have a local species that doesn’t occur anywhere else in the world. Seeing landowners and students get excited about this species really gives me hope about its future.” 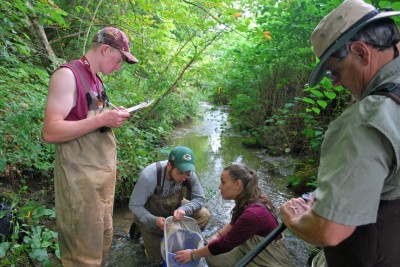 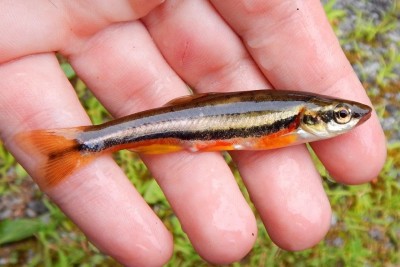 Caption: The tiny Clinch dace, an extremely rare species typically found in forested streams, can serve as an indicator of water quality. All fish surveyed for this study were collected using approved methods and returned to streams unharmed. Photo by Rebecca Bourquin.

Journal of Fish and Wildlife Management