Findings in Mouse Study, if Confirmed in Humans, Could Lead to Better Ways to Fight Treatment-Resistant Tumors 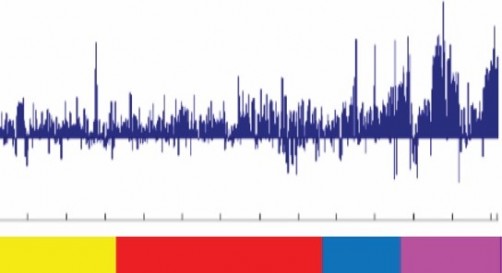 Graph shows elevated activity of a transcription-factor network that includes the molecule Onecut2 in tumors of patients whose prostate cancer resisted hormone therapy (above purple bar) compared with other types. (Michael Freeman, PhD)

Newswise — LOS ANGELES (Nov. 26, 2018) ─ A new study has identified a novel molecular driver of lethal prostate cancer, along with a molecule that could be used to attack it. The findings were made in laboratory mice. If confirmed in humans, they could lead to more effective ways to control certain aggressive types of prostate cancer, the second-leading cause of cancer death for men in the U.S.

Men whose prostate cancer tumors are localized typically survive many years after diagnosis, whether they have surgery, radiation therapy or no treatment at all. But for a minority of men whose cancer spreads to other parts of the body and resists hormone therapy, the prognosis is poor, with fewer than a third surviving five years after diagnosis. More than 29,000 men in the U.S. die from prostate cancer each year, according to the American Cancer Society.

"We need fresh strategies to prevent prostate cancer from turning deadly for the thousands of men whose disease metastasizes and withstands hormone therapy," said Michael Freeman, PhD, co-director of the Cancer Biology Program in the Samuel Oschin Comprehensive Cancer Institute at Cedars-Sinai. Hormone therapy blocks the activity of male hormones, which fuel the growth of the most common type of prostate cancer.

Freeman was the corresponding author of the multi-institutional study, published in the journal Nature Medicine. The co-first authors were project scientist Mirja Rotinen, PhD, and Sungyong You, PhD, assistant professor of Surgery and Biomedical Sciences, both at Cedars-Sinai.

For the research, the team analyzed genetic and molecular data from cancer patients in a large database. They found evidence of elevated activity of the molecule Onecut2 in tumors of patients whose prostate cancer resisted hormone therapy. Onecut2, a type of transcription factor, is needed for the body to make certain proteins.

The team found Onecut2 interfered with the activity of androgen receptor proteins, ­the targets of hormone therapy for prostate cancer. This process could allow the cancer to become less dependent on hormones for growth. At the same time, Onecut2 drove some of the cancer cells to change into a more aggressive variety that resists hormone therapy. "These twin actions of Onecut2 could help explain how certain prostate cancers evade hormone therapy and turn more aggressive," said Freeman, professor of Surgery and Biomedical Sciences.

In additional experiments involving human tissue samples, pharmaceutical databases and laboratory animals, the investigators identified a compound, CSRM617, that counteracted Onecut2. They showed CSRM617 significantly reduced the size of prostate cancer metastases in mice. "Our research suggested that Onecut2 is a master regulator of lethal prostate cancer that may be a useful therapeutic target in up to a third of patients whose cancer spreads and evades hormone therapy," Freeman said.

Freeman also was the corresponding author of a recent study in the journal Cancer Research that identified a new method to gauge the aggressiveness of prostate cancer. This method is based on how stable the shapes of the cancer's cell nuclei are. Instability was associated with cancer types that spread. The investigators also found they could detect nuclei instability in the bloodstream through cells shed by the tumor. These findings could lead to less invasive techniques for identifying potentially dangerous prostate cancer and monitoring its progression through blood samples, the research team said.

"These discoveries are emblematic of the paradigm-shifting work that is being carried out in cancer at Cedars-Sinai," said Dan Theodorescu, MD, PhD, director of the cancer institute. "They show how our investigators are bridging scientific discovery to clinical development of novel therapies that will impact patients."