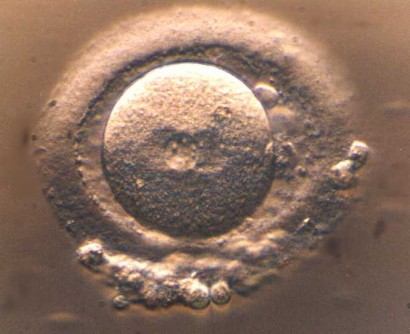 A fertilized human egg, prior to division. Two nuclei (one from the egg and one from the sperm) can be seen in the center.

Newswise — The DNA contained within each of our cells is exactly the same, yet different types of cells – skin cells, heart cells, brain cells – perform very different functions. The ultimate fate of these cells is encoded not just in the DNA, but in a specific pattern of chemical modifications that overlay the DNA structure. These modifications, or epigenetic markers as they are called, are stably carried in our genomes -- except for at times when the cells change their fate, such as what occurs when the sperm meets the egg. Then they are erased completely.

Researchers at the UNC School of Medicine have discovered a protein complex that appears to play a significant role in erasing these epigenetic instructions on sperm DNA, essentially creating a blank slate for the different cell types of a new embryo to develop. The protein complex – called elongator – could prove valuable for changing cell fate, such as converting cancer cells to normal cells, as it may be able to reactivate tumor suppressor genes by removing the epigenetic modifications that often prevent them from curbing the proliferation of cancer cells.

The discovery may also have implications for stem cell research by providing a tool to quickly reprogram adult cells to possess the same attributes as embryonic stem cells, but without the ethical or safety issues of cells currently used for such studies. The results of the study appear on-line in the Jan. 6, 2010 issue of the journal Nature.

“The implications of such research have always been clear, and that is why for years researchers have tried to identify a factor responsible for erasing these epigenetic markers,” said senior author Yi Zhang, Ph.D., Howard Hughes Medical Institute Investigator and Kenan Distinguished Professor of biochemistry and biophysics at UNC. He is also a member of the UNC Lineberger Comprehensive Cancer Center.

Epigenetic markers are essentially chemical tags attached to the genomes of each cell, determining which genes will be turned on or off and, ultimately, what role that cell type will have in the body. One way this comes about is through DNA methylation, a process by which methyl groups are stamped onto cytosines -- one of the four bases of DNA -- to produce a characteristic pattern for a particular cell.

During fertilization, the paternal genome derived from the sperm is actively demethylated, removing these methyl tags quickly before cell division, while the maternal genome is demethylated passively. The new methylation pattern will be reestablished at a later stage.

“Several previous studies have identified factors that can perform gene-specific DNA demethylation, but ours is the first to link a protein complex to global DNA demethylation that correlates to germ cell to somatic cell transition,” Zhang said.

The UNC scientist and his colleagues sought to discover the factor that orchestrates this demethylation. By creating a green fluorescent tag that has affinity to non-methylated DNA, they were able to “watch” the demethylation process under the microscope. With that technology in hand, they began to fish through a dozen candidate factors that they believed could play a role in the process, based on their chemical properties and expression patterns in zygotes, cells formed by the union of sperm and egg.

When they “knocked down” these candidate genes in zygotes, only the loss of the elongator gene prevented the accumulation of the fluorescent tags in the paternal genome, indicating that it was needed for demethylation to occur. The researchers performed a number of experiments to confirm their findings, including sequencing the paternal genome to determine changes in the DNA methylation status.

Zhang says the identification of this gene could have implications for stem cell research, which up until this point has only been possible using two major approaches. One way scientists reprogram adult cell nuclei is by transferring them into an egg, which contains factors that wipe away all epigenetic markers. The other way is to express several critical stem cell factors in adult somatic cells, which coax the cells back to their virginal stem cell state. The first approach involves the use of embryos, which raises ethical concerns; the second involves retroviruses, which can cause cancer and are thus not considered safe.

“But there could be another way,” says Zhang. “Many of the genes that are active in stem cells are not active in adult cells because they are methylated. If elongator can catalyze global demethylation, it could be the critical ingredient to these reprogramming cocktails, enabling us to generate stem cells quickly and safely.”

Now Zhang and his colleagues are conducting biochemical experiments to prove that the protein does possess true demethylase activity. It will be a difficult task, Zhang says, because they still do not know all the subunits of the elongator protein complex. At the same time, the researchers are actively investigating the effects of the protein on reprogramming and its implications for stem cell research.

The research was funded by the Howard Hughes Medical Institute and the National Institutes of Health. Study co-authors from UNC include postdoctoral researchers Yuki Okada, Ph.D., currently a faculty at Kyoto University of Japan, and Kwonho Hong, Ph.D.