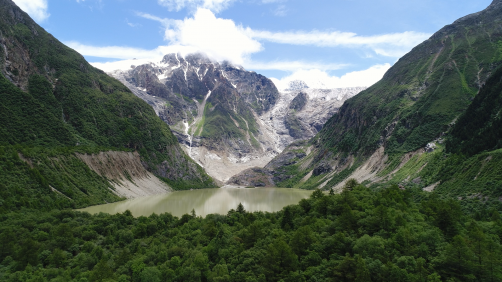 This is a proglacial lake in eastern Tibet. Proglacial lakes can develop in front of retreating glaciers and are prone to cause outburst floods which endanger downstream infrastructure including hydropower plants. 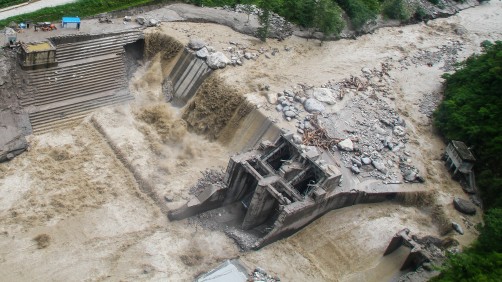 The destruction of the Upper Bhote Koshi Hydro Power Plant in Nepal was caused by the Gongbatongsha glacial lake outburst flood in 2016.

Newswise — The Himalayas and neighbouring mountain ranges (or High Mountain Asia), the planet’s most extensive icy systems outside the polar regions, have the world’s largest undeveloped hydropower potential and are seeing numerous dams and reservoirs under construction or planning. However, climate change is destabilising the landscapes and threatening numerous hydropower projects according to a new study led by researchers from the National University of Singapore (NUS).

In recent years, significant and far-reaching impacts on hydropower projects (HPPs) due to climate-related mountain hazards have been reported in the Himalayas. In February 2021, a rock-ice avalanche hit a Himalayan glacial valley in the Chamoli District of Uttarakhand, India, and resulted in a cascade of debris flows and disastrous flooding which swept away the two hydropower projects including one under construction. Similarly, in July 2016, the Upper Bhotekoshi HPP in Nepal was destroyed by the Gongbatongsha glacial lake outburst flood.

Dr Dongfeng Li, lead author of the study and Research Fellow from the Department of Geography at the NUS Faculty of Arts and Social Sciences, said, “Our study was stimulated by these recent HPP failures in the Himalayas. We thought such mountain hazards might be related to climate change and thus initiated a project to systemically investigate the impacts of climate-driven hazards on hydropower dams and reservoirs in the entire High Mountain Asia.”

Conducted in collaboration with international scientists from the UK, Nepal, Australia, the Netherlands, Canada, Switzerland, China, and Kazakhstan, the study offered recommendations towards climate-change resilient hydropower systems in high mountain areas. It was published in Nature Geoscience on 23 June 2022.

The study, which collated and examined data on glacier, permafrost, typical mountain hazards and related hydropower destructions in the region from the 1960s to the present, found that global warming-induced melting and thawing of the icy systems are severely altering the volume and timing of water supplied from High Mountain Asia, adversely affecting downstream food and energy systems that are relied on by billions of people.

The construction of more reservoirs designed to regulate streamflow and produce hydropower is a critical part of strategies for adapting to these changes. However, the study revealed that these projects are vulnerable to a complex set of interacting processes that are destabilising landscapes throughout the region.

Ranging in severity and the pace of change, these processes include glacial retreat and detachments, permafrost thaw and associated landslides, rock-ice avalanches, debris flows and outburst floods from glacial lakes and landslide-dammed lakes. The result is large amounts of sediment being mobilised that can fill up reservoirs, cause dam failure and degrade power turbines.

Despite the social and environmental concerns of hydropower dams, they contribute to sustainable energy transition, helping to reduce fossil-fuel carbon emissions and supporting the achievement of carbon neutrality. “The construction of dams and reservoirs are key for future water resources in high mountain areas, as climate change is changing the water cycle,” said Professor Walter Immerzeel, co-author of the study and a researcher at Utrecht University in the Netherlands.

To minimise the adverse impacts of climate-driven mountain landscape instability on dams and reservoirs, the team identified the following future actions. First, maps of the distribution of paraglacial zones (or zones newly exposed after glacial retreat), sediment yield and hazard susceptibility that better delineate current and future unstable landscapes and erosion-prone regions should be produced, particularly for HPP hotspots. Policy development regarding maintaining existing HPPs and planning of new HPPs should be guided by such hazard and risk maps.

Second, sediment issues must be viewed as a fundamental consideration for hydropower development. Second author of the study, Professor Xixi Lu, from the NUS FASS Department of Geography, explained, “When planning future reservoirs, storage capacity design should consider potential storage losses associated with increasing sediment loads due to climate change and provide additional storage to cope with climate-related hazards.”

Third, monitoring, forecasting and early-warning systems should be further developed and implemented. “We suggest improving monitoring of glaciers, permafrost, unstable slopes, glacial lakes, erosion, and sediment yields using a range of approaches such as remote-sensing and ground-based observations,” stressed Dr Tobias Bolch, one of the study's co-authors and a researcher at the University of St Andrews in the UK.

Importantly, the authors hope that policymakers and stakeholders are made more aware of such emerging hazards and adopt forward-looking adaptation and mitigation measures to achieve successful sustainable hydropower development in high mountain areas.

Moving forward, the team plans to collect more remotely-sensed and field-based information to better understand the climatic, topographic, and tectonic drivers of the multiple and compounding mountain hazards and their impacts on livelihoods and infrastructure.