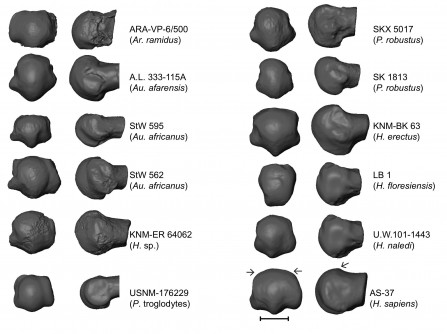 This illustration shows the metatarsal bones of various modern and fossil species analyzed in the forefoot study of ancient hominins.

Newswise — STONY BROOK, N.Y., August 14, 2018 – The feet of primates function as grasping organs. But the adoption of bipedal locomotion – which reduces the ability to grasp – was a critical step in human evolution. In the first comprehensive study of the forefoot joints of ancient hominins, to be published online in PNAS, an international team of researchers conclude that adaptations for bipedal walking in primates occurred as early as 4.4 million years ago, and in that process early hominin feet may have retained some grasping ability.

Co-author Carrie S. Mongle, a doctoral candidate in the Interdepartmental Doctoral Program in Anthropological Sciences, explained that by studying and comparing the toe joint morphologies in fossil hominins, apes, monkeys and humans, the researchers identified novel bony shape variables in the forefoot from both extinct to existent hominins that are linked to the emergence of bipedal walking. Included in their paper, titled “Evolution and function of the hominin forefoot,” are data that provide evidence for how and when the hominin pedal skeleton evolved to accommodate the unique biomechanical demands of bipedalism.

The findings also corroborate the importance of a bony morphology in hominins called the dorsal head expansion and “doming” of the metatarsal heads – essential for bipedalism and a unique feature that distinguished hominins from other primates.

The research was supported in part by the National Science Foundation, National institutes of Health, the Leakey Foundation and the Wenner-Gren Founation.

About Stony Brook University      Stony Brook University is going beyond the expectations of what today’s public universities can accomplish. Since its founding in 1957, this young university has grown to become a flagship as one of only four University Center campuses in the State University of New York (SUNY) system with more than 26,000 students and 2,600 faculty members, and 18 NCAA Division I athletic programs. Our faculty have earned numerous prestigious awards, including the Nobel Prize, Pulitzer Prize, Indianapolis Prize for animal conservation, Abel Prize and the inaugural Breakthrough Prize in Mathematics. The University offers students an elite education with an outstanding return on investment: U.S. News & World Report ranks Stony Brook among the top 50 public universities in the nation. Its membership in the Association of American Universities (AAU) places Stony Brook among the top 62 research institutions in North America. As part of the management team of Brookhaven National Laboratory, the University joins a prestigious group of universities that have a role in running federal R&D labs. Stony Brook University is a driving force in the region’s economy, generating nearly 60,000 jobs and an annual economic impact of more than $4.6 billion. Our state, country and world demand ambitious ideas, imaginative solutions and exceptional leadership to forge a better future for all. The students, alumni, researchers and faculty of Stony Brook University are prepared to meet this challenge.