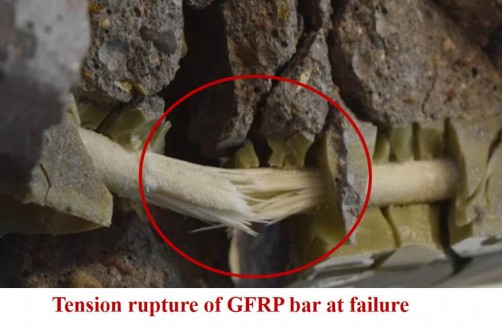 Practical field applications showed that it is highly likely that reinforced concrete (RC) beams are strengthened for both flexure and shear demands. Combining the near-surface mounting-fiber-reinforced polymer (NSM-FRP) for flexural strengthening and U-wrap for shear strengthening is, therefore, a possibility. The American Concrete Institute (ACI) guidelines, however, treat these two strengthening designs separately. This paper examines the drawback of such approach. Our hypothesis is that the U-wrap FRP used for shear strengthening will confine the NSM-FRP bar and the surrounding epoxy, will improve the bond of NSM-FRP to epoxy and, thus, will change the mode of failure from a ductile debonding failure as recommended by ACI guidelines to an abrupt strength rupture of FRP bar.

Near-surface mounting (NSM) technique for flexural strengthening and the U-wrap for shear strengthening of RC flexural members are two well-established techniques recognized by  ACI. With NSM-FRP flexural strengthening technique a saw-cut groove is made on the tension soffit of the beam, and an FRP reinforcing bar is placed in the groove and bonded to the concrete using epoxy. The performance of the NSM-FRP technique is strongly dependent on the bond between NSM-FRP bar and the surrounding adhesive. Prior research showed that failure occurs either by debonding of NSM-FRP bar (preferred mode of failure) or tension rupture of FRP bar after steel yielding. Strength rupture of FRP bar is highly unlikely irrespective of the amount of development length provided. Design guidelines developed by ACI is based on NSM-FRP bar debonding after the FRP bar experiences 60 to 70 percent of its ultimate tension capacity.

The research can be found in a paper titled “Effect of Combining Near-Surface-Mounted and U-Wrap Fiber-Reinforced Polymer Strengthening Techniques on Behavior of Reinforced Concrete Beams,” published by ACI Structural Journal, May-June 2017.