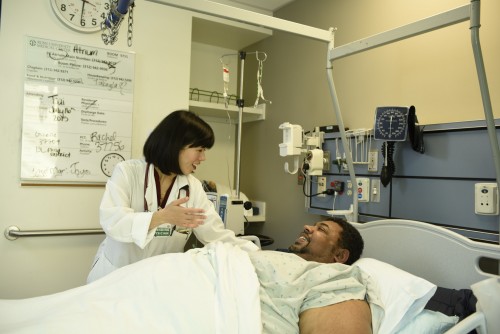 Newswise — Rush University Medical Center ranked fourth among 107 leading academic medical centers in the United States, up from fifth last year, in a national study conducted by the health care services company Vizient. It is the fifth consecutive time Rush has been ranked among the top five in the annual Quality and Accountability Study and the ninth time since the University HealthSystem Consortium, now part of Vizient, began the study in 2005.

Rush is the only academic medical center in Illinois among those participating in the study to receive the award, which recognizes Rush for demonstrating superior performance as measured by the study. The Birnbaum award winners were announced Sept. 14 at the Vizient Clinical Connections Summit in Denver.

“We are proud that Rush has been ranked among the top in this study for the fifth consecutive year,” said Dr. Larry Goodman, CEO of the Rush system and of Rush University Medical Center. “In the midst of dramatic changes in how hospitals deliver care over the past five years, one thing that hasn’t changed is that Rush consistently provides exemplary care for our patients, as the results of this study have shown repeatedly.”

Ratings are based soley on objective data measures

The study, which also included 161 community hospitals, evaluated the participating medical centers and hospitals on the criteria based on the Institute of Medicine’s six domains of care — safety, timeliness, effectiveness, efficiency, equity and patient centeredness.

Unlike other reviews of hospitals that take reputation into account or that are limited to data about patients with Medicare or Medicaid, the Vizient study is based entirely on objective data related to patient outcomes for all patients regardless of insurance. The analysis determined the rankings based on the most recently available full year of data from the Vizient Clinical Data Base and the Vizient Core Measures Data Base; the U.S. Centers for Medicare and Medicaid Services’ Hospital Consumer Assessment of Healthcare Providers and Systems survey; and the U.S. Centers for Disease Control and Prevention’s National Healthcare Safety Network.

“By winning this award, Rush University Medical Center exemplifies a leadership style that is focused on results and a culture of collaboration and adaptability that is necessary to succeed during this time of uncertainty and change in the health care industry,” said Byron Jobe, president and chief administrative officer for Vizient.  “We congratulate them on their achievement.”

Vizient was formed in 2015 as the combination of the UHC, an alliance of the nation's leading academic medical centers; VHA Inc., a national health care network of not-for-profit hospitals; and Novation, the health care contracting company they owned jointly.

Vizient ranking the latest of many honors for Rush

The Vizient ranking is the latest in a consistent stream of honors for Rush University Medical Center and the other Rush system hospitals that are unique among U.S. academic health systems, including the following recognitions: