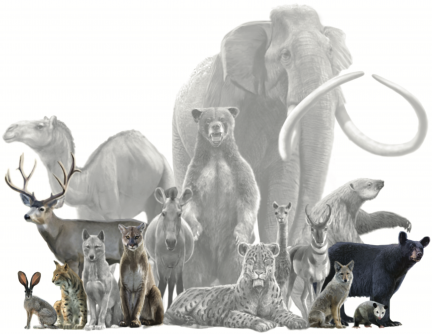 Illustration depicting all mammal species that would inhabit Southern California today if not for human-linked extinction. Extinct species appear in black and white.

Newswise — ALBANY, N.Y. (Aug. 30, 2022) — Research conducted with the help of a University at Albany anthropologist has revealed the cascading effects that humans have had on mammal declines and their food webs over the last 130,000 years, a new study in the journal Science shows.

The study, which was carried out by researchers in the United States, United Kingdom, Denmark and Spain, set out to determine the magnitude of food web loss among mammals since the Late Pleistocene, following the arrival and expansion of human populations around the world.

“We’ve known for a long time that as humans spread out of Africa, everywhere they went, waves of animal extinctions followed their arrival,” said John Rowan, an assistant professor of anthropology at UAlbany who co-authored the study. “When humans got to North America, there were saber-toothed cats, dire wolves, mammoths, mastodons and giant bears. But all these animals start to disappear soon after our species show up.”

While scientists were aware of the human link to mammal extinctions, little was understood regarding how those losses reverberated throughout food webs, which characterize how species interact with one another in an ecosystem. Extinction alone can impact the links in a food web, but so too can reductions and shifts in geographic range due to human impacts, such as habitat destruction.

With the help of a novel machine learning algorithm that relied on known predator-prey traits such as body mass, locomotive capabilities and habitat type, scientists were able to reconstruct ancient food web structures with about 90 percent accuracy. From there, they simulated the impact of species loss to show that while only about 6 percent of mammal species have gone extinct since the Late Pleistocene, more than half of mammal food web links have disappeared.

“It's one thing to demonstrate that species have been lost,” Rowan said. “It's another thing to understand how those losses can translate to cascading effects on ecosystems.”

Food web links are easiest understood as the number of interactions one animal has with others in the food chain. Animals that have more interactions — either by eating more prey than others, or by serving as prey to a greater number of predators — tend to have larger impacts on food web structure and stability. In fact, the loss of key species can create a ripple effect that is felt across an entire ecosystem.

The controversial wolf experiment in Yellowstone National Park is a prime example, Rowan said. Wolves were native to the park until the 1920s when the last wolf pack was killed following a federal campaign to exterminate them in an effort to, among other things, attract more tourists. Their extermination had cascading effects.

“With the loss of wolf predation, Yellowstone’s elk populations got so big that they started overbrowsing woody vegetation,” he said. “This caused a lot of issues, especially along streambanks, where destruction of local vegetation communities accelerated erosion. Streams were getting clogged up, beaver populations declined, and the whole system just unraveled with the removal of that one species.”

The destruction was so great that the government decided to reintroduce wolves to the park in the 1990s in hopes of reviving the habitat.

“They started exerting predation on the elk again, and basically everything goes back into sync,” Rowan said. “Vegetation communities are healthy, herbivore populations are regulated, and so on. Given their key position in Yellowstone’s food webs, wolves exert several direct and indirect forces from the top down that keep everything in check.”

Humans can have both a top down (e.g., hunting) and bottom-up (e.g., ecosystem destruction) impact on species, Rowan said. The new study showed that the largest declines in species and links due to extinction have been in the Americas, Australia and Madagascar, where the lost mammals were disproportionately important to food web complexity.

The machine learning algorithm that the international team of scientists developed can not only reconstruct past food webs but predict unobserved webs today and future webs as well. Many regions of the world are understudied today, but simply knowing what species are present allows the algorithm to predict who interacts with whom. Similarly, the algorithm allows researchers to measure how the loss of any one species will impact future food webs, which can help guide efforts to prevent biodiversity loss.

The study notes that food webs can be restored to prior health by reintroducing certain species to their original habitats, or by introducing functionally equivalent species that possess traits similar to their extinct counterparts.

“Species loss itself is very important,” Rowan said. “We don't want any species to prematurely go extinct due to human impacts. But what we need to come to grips with is how species interaction networks change, because those are really what makes the world go round. The tools we’ve developed in this study give us a way to begin to understand which species will have high-magnitude, cascading impacts on biodiversity loss and which won’t.”