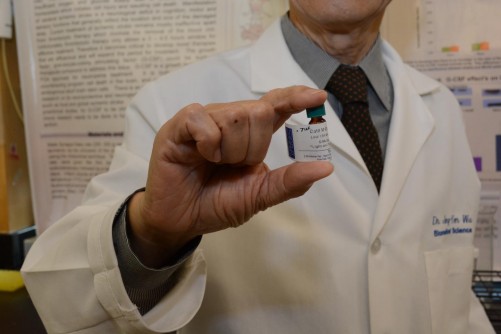 Jang-Yen (John) Wu, Ph.D., holds a bottle containing granulocyte colony-stimulating factor (GCSF). Data from the study support the hypothesis that GCSF is one of the few growth factors that can reduce infarction by decreasing endoplasmic reticulum (ER) and mitochondrial stress while improving behavioral performance in a mouse model.

Newswise — Stroke is the third leading cause of death and disability in the United States. More than 87 percent are ischemic strokes, caused by obstruction of one or more cerebral arteries. With limited progress in developing treatments, there is a critical need for neuroprotective agents to effectively treat stroke.

The study, published in the Journal of Biomedical Science, is the first to report on the neuroprotective effect of GCSF against autophagy and mitochondrial stress in vivo. The data support the hypothesis that GCSF is one of the few growth factors that can reduce infarction by decreasing endoplasmic reticulum (ER) and mitochondrial stress while improving behavioral performance.

Using a mouse model, researchers investigated the efficacy of GCSF beyond the typical four-hour thrombolytic therapy (tPA) clot-busting drug – the gold standard to treat stroke for global ischemia. They examined the pro-survival mechanisms of GCSF against apoptosis resulting from autophagy, mitochondrial stress and ER stress.

“In recent years, many studies including ours have shown that as an endogenous growth factor and immune system modulator factor, GCSF is beneficial in models of neurological disorders such as stroke and traumatic brain injury,” said Jang-Yen (John) Wu, Ph.D., corresponding author, distinguished professor of biomedical science in FAU’s Schmidt College of Medicine, and a member of the FAU Brain Institute               (I-BRAIN). “Although the anti-apoptotic activity of GCSF is reported in global cerebral ischemia, this mechanism has not been fully explored.”

Researchers used a mechanism-based therapeutic approach for stroke first to examine the connection of mitochondrial, autophagy and ER stress inhibition in the protective action of GCSF and then to analyze relevant ER stress pathways in the bilateral common carotid artery occlusion (BCAO) model of stroke. They confirmed the neuroprotection of GCSF gene therapy in the BCAO mouse stroke model by a decrease of dynamin-related protein (DRP1), a marker of mitochondrial stress, in the frontal and middle brain of the GCSF treated group.

The initial dose of GCSF was administered 24 hours post-BCAO and then followed by a single application of the same dose for another three days for a total of four days of administration. Researchers examined behavior and used immunoblotting to analyze key proteins in ER stress, autophagy and mitochondrial stress-induced apoptosis. BCAO mice receiving GCSF protein showed significantly less asymmetric turning in the corner test than BCAO mice without GCSF. In the behavioral assays, GCSF elicited increased locomotor sensitization verified by greater activity in the locomotor activity test, demonstrating the neuroprotective properties of the drug.

“More than 15 million people worldwide suffer from stroke and our study provides new and important insights into GCSF induced protection as it relates to ER stress and mitochondrial stress activated apoptosis, ” said Howard Prentice, Ph.D., corresponding author, a professor of biomedical sciences in FAU’s Schmidt College of Medicine, and a member of FAU’s I-BRAIN. “Future research will need to focus on uncovering the complete mechanisms by which GCSF retains the ER and mitochondrial homeostasis.”

Wu and Prentice have been developing GCSF as a therapeutic method to replenish new brain cells because of its ability to preserve the central nervous system, suppress cell death and at the same time elicit neurogenesis as well as angiogenesis. GCSF works the same way for other neurological diseases such as Parkinson’s disease due to its neuroprotective properties.

Wu and Prentice have received a patent with the U.S. Patent Office (USPTO) for the neuroprotective properties of GCSF in stroke. Wu and Dipnarine Maharaj, M.D., Maharaj Institute of Immune Regenerative Medicine, also received a patent from the USPTO for use of GCSF for treatment of Parkinson’s disease. A patent application with the USPTO also has been filed by WU for the neuroprotective and neurogenesis properties of GCSF gene therapy for treatment of stroke and Alzheimer’s disease.

This research was funded by the Florida Department of Health, James and Esther King Biomedical Research Program of Florida and by a grant from the AEURA Trust.

FAU’s Charles E. Schmidt College of Medicine is one of approximately 152 accredited medical schools in the U.S. The college was launched in 2010, when the Florida Board of Governors made a landmark decision authorizing FAU to award the M.D. degree. After receiving approval from the Florida legislature and the governor, it became the 134th allopathic medical school in North America. With more than 70 full and part-time faculty and more than 1,300 affiliate faculty, the college matriculates 64 medical students each year and has been nationally recognized for its innovative curriculum. To further FAU’s commitment to increase much needed medical residency positions in Palm Beach County and to ensure that the region will continue to have an adequate and well-trained physician workforce, the FAU Charles E. Schmidt College of Medicine Consortium for Graduate Medical Education (GME) was formed in fall 2011 with five leading hospitals in Palm Beach County. The Consortium currently has five Accreditation Council for Graduate Medical Education (ACGME) accredited residencies including internal medicine, surgery, emergency medicine, psychiatry, and neurology.