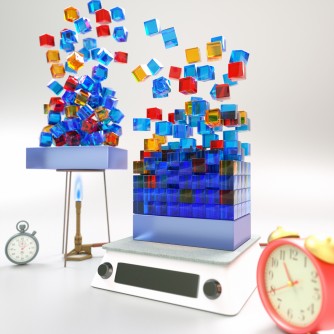 Created for the Institute of Molecular Engineering by Peter Allen 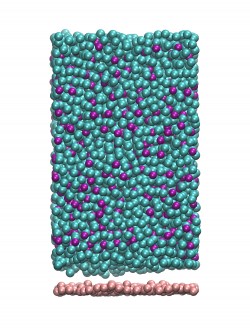 This image shows the molecular configuration of a simulated ultrastable glass. The purple and greenish-blue spheres represent two different types of atoms (phosphorus and nickel, respectively) that were introduced onto the substrate (the pink spheres) a few at a time in a molecular dynamics simulation, mimicking the vapor deposition process as it occurs in laboratory experiments. 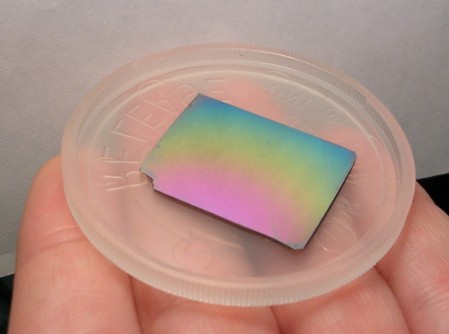 A type of glass created by researchers at the University of Wisconsin-Madison using a new vapor-deposition method is extremely stable. The rainbow of colors in this super-stable glass comes from variations in its thickness.

Newswise — Technologically valuable ultrastable glasses can be produced in days or hours with properties corresponding to those that have been aged for thousands of years, computational and laboratory studies have confirmed. Aging makes for higher quality glassy materials because they have slowly evolved toward a more stable molecular condition. This evolution can take thousands or millions of years, but manufacturers must work faster. Armed with a better understanding of how glasses age and evolve, researchers at the universities of Chicago and Wisconsin-Madison raise the possibility of designing a new class of materials at the molecular level via a vapor-deposition process. “In attempts to work with aged glasses, for example, people have examined amber,” said Juan de Pablo, UChicago’s Liew Family Professor in Molecular Theory and Simulations. “Amber is a glass that has been aged millions of years, but you cannot engineer that material. You get what you get.” de Pablo and Wisconsin co-authors Sadanand Singh and Mark Ediger report their findings in the latest issue of Nature Materials. Ultrastable glasses could find potential applications in the production of stronger metals and in faster-acting pharmaceuticals. The latter may sound surprising, but drugs with the amorphous molecular structure of ultrastable glass could avoid crystallization during storage and be delivered more rapidly in the bloodstream than pharmaceuticals with a semi-crystalline structure. Amorphous metals, likewise, are better for high-impact applications than crystalline metals because of their greater strength. The Nature Materials paper describes computer simulations that Singh, a doctoral student in chemical engineering at UW-Madison, carried out with de Pablo to follow-up some intriguing results from Ediger’s laboratory.

Growing stable glasses Ediger, like researchers for decades before him, had been growing materials via vapor deposition in a vacuum chamber. In this process, glasses are created when a sample a sample material is heated, then vaporizes and finally condenses and grows atop an experimental surface.

Several years ago, he discovered that glasses grown this way on a specially prepared surface that is kept within a certain temperature range exhibit far more stability than ordinary glasses. Previous researchers must have grown this material under the same temperature conditions, but failed to recognize the significance of what they had done, Ediger said.

Ediger speculated that growing glasses under these conditions, which he compares to the Tetris video game, gives molecules extra room to arrange themselves into a more stable configuration. But he needed Singh and de Pablo’s computer simulations to confirm his suspicions that he had actually produced a highly evolved, ordinary glass rather than an entirely new material.

“There’s interest in making these materials on the computer because you have direct access to the structure, and you can therefore determine the relationship between the arrangement of the molecules and the physical properties that you measure,” said de Pablo, a former UW-Madison faculty member who joined UChicago’s new Institute for Molecular Engineering earlier this year.

There are challenges, though, to simulating the evolution of glasses on a computer. Scientists can cool a glassy material at the rate of one degree per second in the laboratory, but the slowest computational studies can only simulate cooling at a rate of 100 million degrees per second. “We cannot cool it any slower because the calculations would take forever,” de Pablo said.

Creating better materials “What we found here is that there are actually differences, it’s just that you had to create better glassy materials. Once you create these materials, you see that the structure, the differences between ordinary and stable glasses are clearly there and are actually pronounced.”

Ultrastable glasses achieve their stability in a manner analogous to the most efficiently packed, multishaped objects in Tetris, each consisting of four squares in various configurations that rain from the top of the screen. “This is a little bit like the molecules in my deposition apparatus raining down onto this surface, and the goal is to perfectly pack a film, not to have any voids left,” Ediger said.

The object of Tetris is to manipulate the objects so that they pack into a perfectly tight pattern at the bottom of the screen. “The difference is, when you play the game, you have to actively manipulate the pieces in order to build a well-packed solid,” Ediger said. “In the vapor deposition, nature does it for us.”

But in Tetris and experiments alike, when the objects or molecules descend too quickly, the result is a poorly packed, void-riddled pattern.

“In the experiment, if you either rain the molecules too fast or choose a low temperature at which there’s no mobility at the surface, then this trick doesn’t work,” Ediger said. Then it would be like taking a bucket of odd-shaped pieces and just dumping them on the floor. There are all sorts of voids and gaps because the molecules didn’t have any opportunity to find a good way of packing.”

Funding: National Science Foundation and the U.S. Department of Energy. 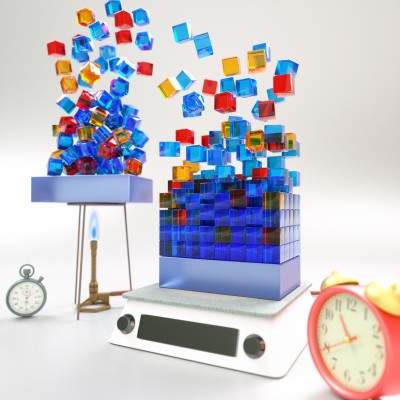 Credit: Created for the Institute of Molecular Engineering by Peter Allen 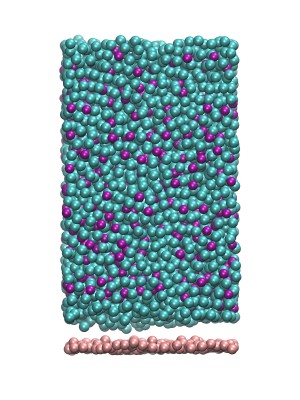 Caption: This image shows the molecular configuration of a simulated ultrastable glass. The purple and greenish-blue spheres represent two different types of atoms (phosphorus and nickel, respectively) that were introduced onto the substrate (the pink spheres) a few at a time in a molecular dynamics simulation, mimicking the vapor deposition process as it occurs in laboratory experiments. 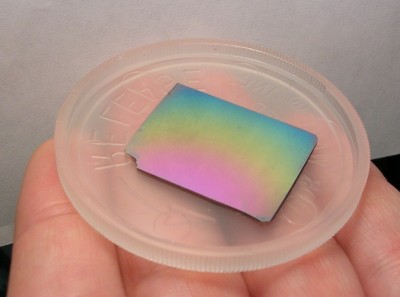 Caption: A type of glass created by researchers at the University of Wisconsin-Madison using a new vapor-deposition method is extremely stable. The rainbow of colors in this super-stable glass comes from variations in its thickness.