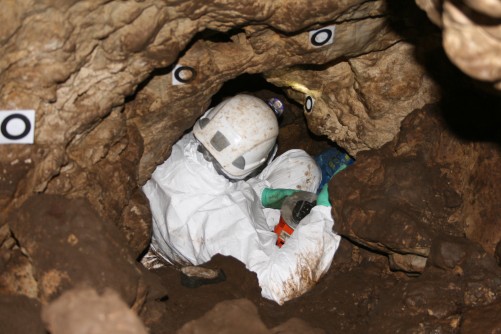 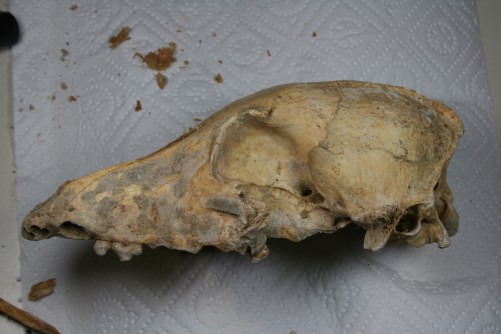 A picture of the 5000 year old Late Neolithic CTC dog skull in the lab before it underwent whole genome sequencing.

Newswise — STONY BROOK, N.Y., July 18, 2017 – By analyzing the DNA of two prehistoric dogs from Germany, an international research team led by Krishna R. Veeramah, PhD, Assistant Professor of Ecology & Evolution in the College of Arts & Sciences at Stony Brook University, has determined that their genomes were the probable ancestors of modern European dogs. The finding, to be published in Nature Communications, suggests a single domestication event of modern dogs from a population of gray wolves that occurred between 20,000 and 40,000 years ago.

Dogs were the first animal to be domesticated by humans. The oldest dog fossils that can be clearly distinguished from wolves are from the region of what is now Germany from around 15,000 years ago. However, the archeological record is ambiguous, with claims of ancient domesticated dog bones as far east as Siberia. Recent analysis of genetic data from modern dogs adds to mystery, with some scientists suggesting many areas of Europe, Central Asia, South Asia and the Middle East as possible origins of dog domestication.

In 2016, research by scientists using emerging paleogenomics techniques proved effective for sequencing the genome of a 5,000-year-old ancient dog from Ireland. The results of the study led the research team to suggest dogs were domesticated not once but twice. The team from Oxford University also hypothesized that an indigenous dog population domesticated in Europe was replaced by incoming migrants domesticated independently in East Asia sometime during the Neolithic era.

“Contrary to the results of this previous analysis, we found that our ancient dogs from the same time period were very similar to modern European dogs, including the majority of breed dogs people keep as pets,” explained Dr. Veeramah. “This suggests that there was no mass Neolithic replacement that occurred on the continent and that there was likely only a single domestication event for the dogs observed in the fossil record from the Stone Age and that we also see and live with today.”

In the paper, titled “Ancient European dog genomes reveal continuity since the Early Neolithic,” Veeramah and colleagues used the older 7,000 year old dog to narrow the timing of dog domestication to the 20,000 to 40,000 years ago range.

They also found evidence of the younger 5,000 year old dog to be a mixture of European dogs and something that resembles current central Asian/Indian dogs. This finding may reflect that people moving into Europe from the Asian Steppes at the beginning of the Bronze Age brought their own dogs with them.

“We also reanalyzed the ancient Irish dog genome alongside our German dog genomes and believe we found a number of technical errors in the previous analysis that likely led those scientists to incorrectly make the conclusion of a dual domestication event,” added Veeramah.

Overall, he emphasized, their new genomic analysis of ancient dogs will help scientists better understand the process of dog evolution, even if the exact geographic origin of domestication remains a mystery. He expects further sequencing of the ancient genomes from Eurasia will help to eventually solve the issue.

The study and findings are a collaboration between scientists at Stony Brook University; the University of Michigan, Johannes Gutenberg-University, Germany; University of Bamberg, Germany; Trinity College, Ireland; and the Department of Monumental Heritage in Germany.

The research was supported in part by the National Institutes of Health.

About Stony Brook University
Stony Brook University is going beyond the expectations of what today’s public universities can accomplish. Since its founding in 1957, this young university has grown to become one of only four University Center campuses in the State University of New York (SUNY) system with more than 25,700 students, 2,500 faculty members, and 18 NCAA Division I athletic programs. Our faculty have earned numerous prestigious awards, including the Nobel Prize, Pulitzer Prize, Indianapolis Prize for animal conservation, Abel Prize and the inaugural Breakthrough Prize in Mathematics. The University offers students an elite education with an outstanding return on investment: U.S. News & World Report ranks Stony Brook among the top 40 public universities in the nation. Its membership in the Association of American Universities (AAU) places Stony Brook among the top 62 research institutions in North America. As part of the management team of Brookhaven National Laboratory, the University joins a prestigious group of universities that have a role in running federal R&D labs. Stony Brook University is a driving force in the region’s economy, generating nearly 60,000 jobs and an annual economic impact of $4.65 billion. Our state, country and world demand ambitious ideas, imaginative solutions and exceptional leadership to forge a better future for all. The students, alumni, researchers and faculty of Stony Brook University are prepared to meet this challenge.