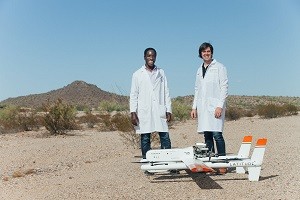 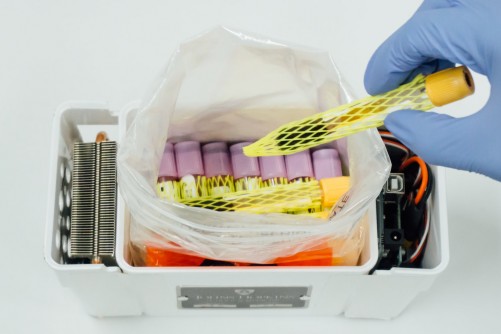 In a report of the findings, published in the American Journal of Clinical Pathology on Sept. 6, the investigators say the achievement adds to evidence that unmanned aircraft can be an effective, safe and timely way to quickly transport medical samples from remote sites to laboratories.

“We expect that in many cases, drone transport will be the quickest, safest and most efficient option to deliver some biological samples to a laboratory from rural or urban settings,” says Timothy Amukele, M.D., Ph.D., assistant professor of pathology at the Johns Hopkins University School of Medicine and the paper’s senior author.

“Drones can operate where there are no roads, and overcome conditions that disable wheeled vehicles, traffic and other logistical inefficiencies that are the enemy of improved, timely patient diagnoses and care,” Amukele says. “Drones are likely to be the 21st century’s best medical sample delivery system.” Building on previous work by Amukele’s team, the investigators collected pairs of 84 blood samples at the University of Arizona in Tucson, then drove them 76 miles to an airfield.

One sample from each pair was loaded onto a commercially available drone, which flew them 161 miles. The flight took off and landed at the same airfield, on a drone test range. The samples flown by drone were contained in a temperature-controlled chamber designed by the Johns Hopkins team. The other sample of each pair was held in a car at the airfield with active cooling to maintain target temperature. The average temperature of the flown samples was 24.8°C (76.6°F) compared with 27.3°C (81.1°F) for the samples not flown.

Among other precautions, the test was conducted away from populated areas in restricted airspace at an unpopulated military test range that was cleared of other air traffic. The aircraft was under the control of a certified remote pilot, using a radio link between the drone’s onboard flight computer and the ground control station. Samples were packed and transported according to International Air Transport Association guidelines. The aircraft used in the study was a Latitude Engineering HQ-40.

Following the flight, all samples were transported 62 miles by car to the Mayo Clinic in Scottsdale, Arizona. All samples were tested for 17 of the 19 most common chemistry and hematology tests. Flown and not-flown paired samples showed similar results for red blood cell, white blood cell and platelet counts and sodium levels, among other results. Statistically significant but small differences were seen in glucose and potassium levels, which also show variation in standard transport methods (e.g. automobile transport). These differences were due to chemical degradation from slightly warmer temperature in the not-flown samples.

The Johns Hopkins team previously studied the impact of drone transportation on the chemical, hematological and microbial makeup of drone-flown blood samples over distances up to 20 miles, and found that none were negatively affected. The team plans further and larger studies in the U.S. and overseas.

Other authors on this study include Jeff Street of the Johns Hopkins University School of Medicine; Christine LH Snozek and James Hernandez of the Mayo Clinic in Arizona; and Ryan G. Wyatt, Matthew Douglas and Richard Amini of the University of Arizona.

Funding for this study was provided by Peter Kovler of the Blum-Kovler Foundation.