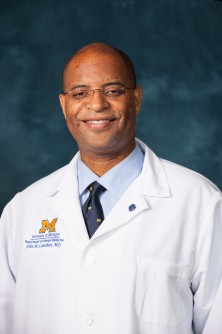 The population-based study of 503 people with colon cancer found that 14 percent of Caucasians and 7 percent of African-Americans had a genetic marker called microsatellite instability, or MSI. These types of tumors are known to be resistant to the chemotherapy drug 5FU. Yet, even without chemotherapy, these patients tend to have better outcomes.

“We know that patients with MSI colon cancer do better without chemotherapy. But these improved survival benefits are limited among African-Americans with colon cancer,” says lead study author John M. Carethers, M.D., John G. Searle Professor and Chair of internal medicine at the University of Michigan Medical School.

Results of the study appear in the journal PLOS ONE.

The group of patients Carethers and his colleagues looked at was 45 percent African-American and 55 percent Caucasian. Researchers examined tissue samples taken at the time of surgery and assessed it for various markers, including MSI.

In addition to the racial imbalance in MSI, the researchers also found that African-Americans patients were more likely than Caucasian patients to have cancer on the right side of their colon. This is significant because right-sided colon cancer is easier to miss with screening and more likely to be found larger or more advanced than left-sided cancers.

“Right-sided colon cancer may be the ‘black ice’ of the colon – unseen but potentially deadly. Strategies to better recognize and detect right-sided cancer may need to be pursued in a broader fashion,” Carethers says.