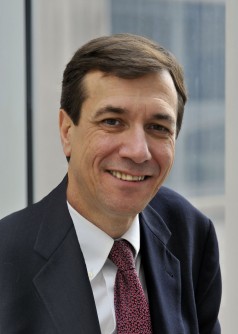 Newswise — A new study finds that a decades-old drug used to treat malaria lowers levels of a biomarker linked to the inherited form of amyotrophic lateral sclerosis, also known as ALS and Lou Gehrig's Disease. The research, conducted by investigators at Hospital for Special Surgery (HSS) and other centers, was published online in the Annals of Neurology, in advance of the June print edition of the journal.

Some people with the inherited form of ALS have a mutation in the SOD1 gene. Researchers set out to determine if pyrimethamine, a drug that has been around for decades, could safely and effectively lower levels of the toxic protein produced by the gene mutation.

"Our multi-center international study found that pyrimethamine reduced levels of SOD1 in the cerebrospinal fluid of patients with familial ALS, and the amount of lowering was related to the dose of pyrimethamine," noted Dale J. Lange, MD, principal investigator and neurologist-in-chief at HSS. "There is currently no cure for this devastating disease, but our study represents the first time a drug lowered a protein known to be relevant to disease progression; as such, a slowing of disease progression would be expected."

Amyotrophic lateral sclerosis is a relentless disease that progressively attacks nerve cells in the brain and the spinal cord. As time goes on, patients lose the ability to initiate and control muscle movement, their speech is affected and they become paralyzed. Swallowing and breathing become increasingly difficult, and ALS is often fatal within three to five years. In addition to Lou Gehrig, acclaimed physicist Steven Hawkings is a well-known person with ALS.

The study, supported by a grant from the Muscular Dystrophy Association of America, enrolled 32 patients with various SOD1 genetic mutations linked to ALS. Participants had three lumbar punctures, blood studies, and a clinical assessment of strength, motor function, quality of life, and potential adverse effects. Out of the patients enrolled, 24 completed six visits over 18 weeks, and 21 completed all study visits.

The researchers noted that their study represents the largest prospective clinical and biological investigation of patients with familial ALS in the literature to date. "To our knowledge, this is the first study in humans with ALS that targeted and achieved a significant reduction of a disease-relevant biomarker in the cerebrospinal fluid. We found that pyrimethamine was safe and well tolerated in patients with ALS caused by different SOD1 mutations," Dr. Lange noted.

"Although not proven by this study, a slowing of disease progression was observed. A larger study is needed, and is being planned, to determine if pyrimethamine does indeed influence the disease course in ALS patients."

No significant change in quality of life was observed over the nine-month study period. Study limitations included the fact that patients had varying levels of disease severity, and those with the worst symptoms were more likely to drop out, according to the investigators.

About Hospital for Special Surgery
Hospital for Special Surgery (HSS) is the world’s leading academic medical center focused on musculoskeletal health. HSS is nationally ranked No. 1 in orthopedics and No. 2 in rheumatology by U.S. News & World Report (2016-2017), and is the first hospital in New York State to receive Magnet Recognition for Excellence in Nursing Service from the American Nurses Credentialing Center four consecutive times. HSS has one of the lowest infection rates in the country. HSS is an affiliate of Weill Cornell Medical College and as such all Hospital for Special Surgery medical staff are faculty of Weill Cornell. The hospital's research division is internationally recognized as a leader in the investigation of musculoskeletal and autoimmune diseases. HSS has locations in New York, New Jersey and Connecticut.
www.hss.edu