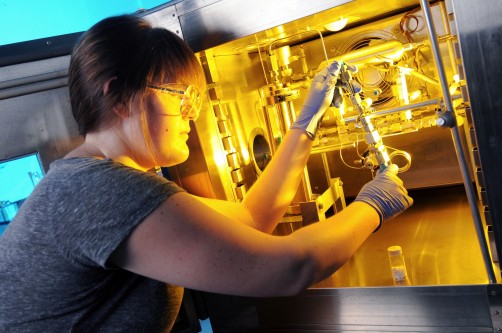 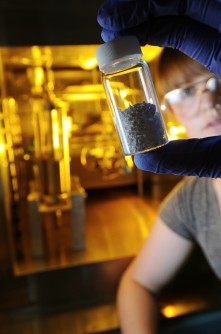 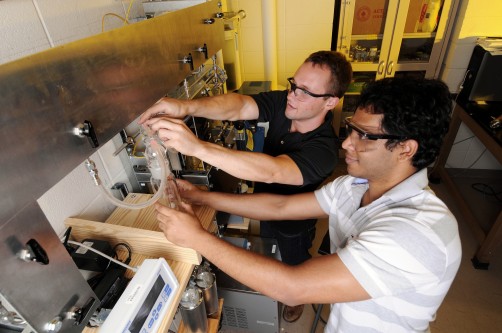 Miles Sakwa-Novak and Ambarish Kulkarni, both Georgia Tech Ph.D. candidates, set up a steam stripping system that can measure the carbon dioxide adsorption and desorption properties of powder samples. Steam stripping is used in adsorbent regeneration. 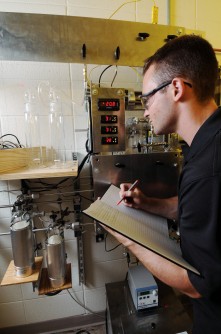 Newswise — With a series of papers published in chemistry and chemical engineering journals, researchers from the Georgia Institute of Technology have advanced the case for extracting carbon dioxide directly from the air using newly-developed adsorbent materials. The technique might initially be used to supply carbon dioxide for such industrial applications as fuel production from algae or enhanced oil recovery. But the method could later be used to supplement the capture of CO2 from power plant flue gases as part of efforts to reduce concentrations of the atmospheric warming chemical.

In a detailed economic feasibility study, the researchers projected that a CO2 removal unit the size of an ocean shipping container could extract approximately a thousand tons of the gas per year with operating costs of approximately $100 per ton. The researchers also reported on advances in adsorbent materials for selectively capturing carbon dioxide.

“Even if we removed CO2 from all the flue gas, we’d still only get a portion of the carbon dioxide emitted each year,” noted David Sholl, a professor in Georgia Tech’s School of Chemical & Biomolecular Engineering. “If we want to make deep cuts in emissions, we’ll have to do more – and air capture is one option for doing that.”

The Georgia Tech research into air capture techniques was funded by the U.S. Department of Energy. Papers describing the economic analysis and new adsorbent materials were published in the journals ChemSusChem, Industrial and Engineering Chemistry Research, the Journal of Physical Chemistry Letters and the Journal of the American Chemical Society.

Carbon dioxide from large sources such as coal-burning power plants or chemical facilities account for less than half the worldwide emissions of the gas, noted Christopher Jones, also a professor in the Georgia Tech School of Chemical & Biomolecular Engineering. Much of the remaining emissions come from mobile sources such as buses, cars, planes and ships, where capture would be much more costly per ton.

Jones is collaborating with a startup company – Global Thermostat – to establish a pilot plant to demonstrate the direct air capture technique. The technology for capturing carbon dioxide from the air would be similar to that required for removing the gas from smokestack emissions, though CO2 concentrations in flue gases are dramatically higher than those in the atmosphere.

Flue gases contain about 15 percent carbon dioxide, while CO2 is found in the atmosphere at less than 400 parts per million. That’s a factor of 375, notes Sholl, who said the difference in capture efficiency could be partially made up by eliminating the need to transport CO2 removed from flue gas to sequestration locations.

“Because the atmosphere is generally consistent, you could operate the capture equipment wherever you had a sequestration site,” he said. “I don’t think air capture will ever produce carbon dioxide as cheaply as capturing it from flue gas. But on the other hand, it doesn’t seem to be wildly more expensive, either.”

Based on his work with Global Thermostat, Jones believes that the costs of an optimized process will prove to be even lower than the estimates of Sholl’s team. “Sholl’s paper is important because it shows that direct capture of CO2 from the air can be up to ten times less expensive than had been estimated by others,” he said. “Process improvements based on their initial modeling study could bring costs down even further.”

In its economic analysis, Sholl’s team considered all of the energy that would have to be put into the capture process. The cost estimates did not include the capital cost of establishing the capture facilities because the technology is still too new for reliable projections.

The batch extraction process modeled by the Georgia Tech team involves blowing air through a ceramic honeycomb structure coated with dry amino-modified silica material to capture the CO2, then flowing steam through the structure to release the gas. The technique could produce carbon dioxide that is roughly 90 percent pure.

Among their recent papers on direct capture of CO2 from the air are:

• A Journal of the American Chemical Society paper that described the role of zirconium in producing more efficient amine-based adsorbents. “Past work has focused on maximizing the amount of CO2 captured per gram of adsorbent by adding ever-increasing amounts of amines,” Jones explained. “We are the first to show that an alternate strategy is to change the oxide support that the amines lay on, and for a fixed amount of amine, each amine works more efficiently.”

• A paper published in ChemSusChem describing the role played by primary, secondary and tertiary amines in capturing carbon dioxide from ultra-dilute gases like air. “We showed conclusively that primary amines are responsible for CO2 capture from the air, that secondary amines work to some degree, and that tertiary amines don’t absorb from air in any appreciable amount,” Jones said.

Jones believes air capture should be among the options developed to address global warming produced by increasing levels of carbon dioxide in the atmosphere.

“Initial demonstrations of the air capture process will probably be targeted for applications that can use the carbon dioxide for commercial purposes,” Jones said. “As the technology matures, we envision implementing CO2 capture from the air as a climate stabilization strategy, in parallel with CO2 capture from flue gas and enhanced utilization of alternative energies.” 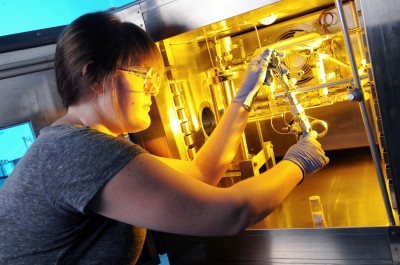 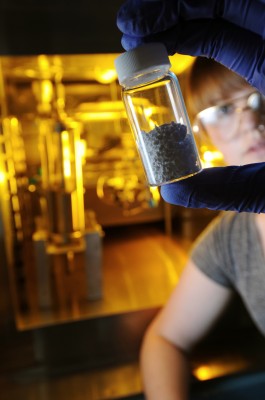 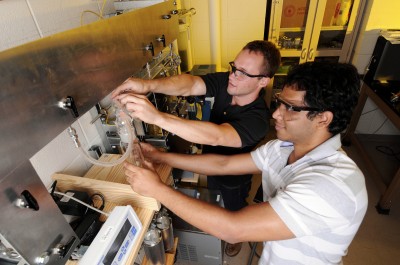 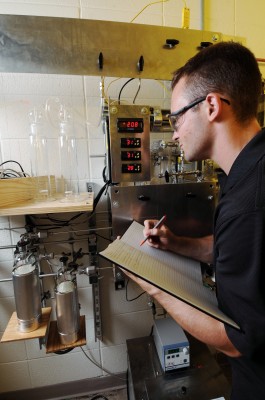