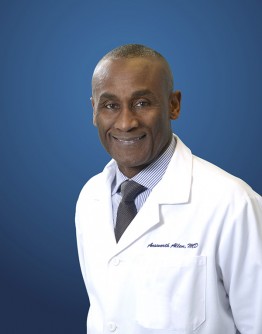 Newswise — A study at Hospital for Special Surgery (HSS) finds that most athletic patients who have reconstructive surgery for a torn anterior cruciate ligament (ACL) are highly satisfied with the procedure and able to return to sports.

Researchers launched the study with a focus on patient satisfaction and “return to play” after ACL surgery because few studies have reported on these measures in the past. “Our study found that patient satisfaction was very high after ACL reconstruction, and that satisfaction correlated highly with return to a sport,” said Benedict Nwachukwu, MD, MBA, who presented the findings at the American Academy of Orthopaedic Surgeons Annual Meeting in San Diego on March 14.

“Various patient-reported outcome measures looking at pain, instability, swelling and the ability to perform routine activities after ACL reconstruction are commonly used. But return to play and patient satisfaction have been significantly underreported,” said Answorth Allen, MD, senior investigator and a sports medicine surgeon at Hospital for Special Surgery.

“In the United States alone, the annual cost of surgical treatment of ACL rupture has been estimated at $2 billion. As such, there is significant interest in assessing the value of ACL reconstructive surgery,” Dr. Allen added. “Value in healthcare is increasingly investigated and defined from the patient’s perspective. An important complement to assessing value for the patient is the measurement and reporting of patient satisfaction.”

The study was conducted using the Hospital for Special Surgery ACL Registry, which includes the patients of all physicians on the hospital’s Sports Medicine and Shoulder Service. The researchers set out to investigate rates and predictors of return to play, evaluate patient satisfaction after surgery, and analyze the relationship between the ability to return to a sport and satisfaction.

The study included 232 patients, all active athletes, who had undergone anterior cruciate ligament reconstruction at HSS between 2009 and 2013. Prior to surgery, the patients had participated in one of the following sports: basketball, football, lacrosse, skiing, soccer or tennis. The mean age of patients was 26.7 years, and 52% were male.

All study participants had a minimum two-year follow-up after surgery. To assess outcomes, they completed a questionnaire that asked about return to play, sport performance, repeat injury, factors influencing ability or inability to resume a sport, and overall patient satisfaction.

Out of 231 patients responding to the return to play question, 201 (87%) had resumed their sport at a mean time of 10 months. Eighty-nine percent of patients indicated that they had returned to their prior level of competition. Overall satisfaction was high – more than 85% were very satisfied with the outcome of surgery, and 98% indicated they would have the procedure again.

With respect to techniques used for ACL reconstruction, patients who had a patellar tendon autograft had an increased chance of getting back to their activity. Regarding participation in specific sports, tennis received the highest return to play score, with 100% of patients indicating they were able to get back on the court. Those playing soccer and lacrosse had a decreased chance of returning to play. Among those not resuming a sport, fear about knee re-injury and concerns about the physical ability of the knee were the most common reasons.

“These findings have important implications for demonstrating that ACL reconstruction is a procedure that receives high satisfaction ratings by patients. Additionally, the correlation between patient satisfaction and return to play had not been demonstrated prior to this study,” said Dr. Nwachukwu. “Continued attention should be paid to ‘return to play’ to optimize satisfaction among athletic patients. Consideration should also be given to sports-specific rehabilitation programs to help patients achieve this goal.” About Hospital for Special Surgery Hospital for Special Surgery (HSS) is the world’s largest academic medical center focused on musculoskeletal health. HSS is nationally ranked No. 1 in orthopedics and No. 2 in rheumatology by U.S. News & World Report (2016-2017), and is the first hospital in New York State to receive Magnet Recognition for Excellence in Nursing Service from the American Nurses Credentialing Center four consecutive times. HSS has one of the lowest infection rates in the country. HSS is an affiliate of Weill Cornell Medical College and as such all Hospital for Special Surgery medical staff are faculty of Weill Cornell. The hospital's research division is internationally recognized as a leader in the investigation of musculoskeletal and autoimmune diseases. Hospital for Special Surgery is located in New York City and online at www.hss.edu.