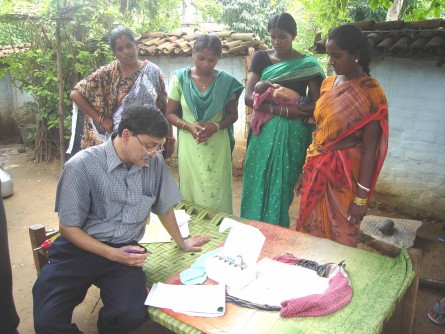 Dr. Pinaki Panigrahi monitors a baby’s progress in a clinical trial in India.

Newswise — A research team at the University of Nebraska Medical Center College of Public Health has determined that a special mixture of good bacteria in the body reduced the incidence of sepsis in infants in India by 40 percent at a cost of only $1 per infant. The findings are reported in the Aug. 16 issue of the journal Nature.

Pinaki Panigrahi, M.D., Ph.D., professor, epidemiology and pediatrics, Center for Global Health and Development, and his colleagues in the College of Public Health, led the international research team. The results reflect a culmination of 15 years of research and could seriously impact infant health worldwide.

Probiotics are live bacteria and yeasts that are good for your health, especially your digestive system. Synbiotics are combinations of probiotics with an FOS supplement that promotes growth and sustains colonization of the probiotic strain. FOS, naturally found in breast milk and such plants as onion, chicory, garlic, asparagus, banana, artichoke and others, is food for the probiotic bacteria.

Sepsis is a severe complication of bacterial infection that results in around one million infant deaths worldwide each year, mostly in developing countries. It occurs when the immune system stops fighting germs and begins to turn on itself and can lead to tissue damage, organ failure and death.

It is estimated that 40 percent of patients with severe sepsis in developing countries do not survive. When children and adults are included, the inpatient cost for managing patients with sepsis in U.S. hospitals is nearly $24 billion each year.

“This is the largest clinical trial of probiotics in newborns funded by the National Institutes of Health,” Dr. Panigrahi said. The team enrolled more than 4,500 newborns from 149 villages in the Indian province of Odisha and followed them for their first 60 days, the most critical period when they get sick and die.

During their first days of life, the newborns were administered the oral preparation for seven days.

Results of the randomized, double-blind, placebo-controlled study showed that sepsis and deaths in the first two months of infancy were reduced by 40 percent, more than twice the anticipated reduction of 20 percent. The synbiotic treatment also lowered respiratory tract infections.

The effectiveness demonstrated in Dr. Panigrahi’s study was so successful the study was halted early.

Few trials on the use of probiotics to prevent sepsis have focused on newborns, whose largely naive immune system and less complex intestinal environment would allow the probiotic to grow.

“We were concerned when the data safety and monitoring board stopped the study prematurely. We had enrolled just about half of our proposed subjects. Typically, a study is stopped when something is wrong.

“But, it was a moment of superlative thrill when we learned it was stopped due to early efficacy. We were surprised a second time when the complete data analysis showed that respiratory tract infections also were reduced – something we did not anticipate in our population,” Dr. Panigrahi said.

A country’s health is measured by its infant mortality.

India has one of the highest rates of infant mortality in the world. Of the one million newborns who die at birth worldwide, India accounts for 700,000 such deaths, according to UNICEF. For every 1,000 live births in India, 40 babies die.

By comparison, the infant mortality rate in Sri Lanka, Nepal, and Bangladesh are 9, 29, and 33, respectively, according to the World Health Organization(WHO).

Dr. Panigrahi wants to bring these numbers down and the results of his study are a big first step.

“This study has to be replicated in different countries and under different circumstances. We maintained tight controls on the administration of the synbiotic and conducted a rigorous follow-up which will not be available in real life,” he said.

“We have to find out why respiratory infections went down. How does this treatment affect the lungs?”

The intestinal system is the largest immune organ in the body, Dr.  Panigrahi said. “If you took it apart and spread out the villi – small, finger-like projections that extend into the small intestine – it would cover a tennis court. And, it’s loaded with lymphoid cells. So, if you want to stimulate the body’s immunity, go to the intestine.”

Also known as “blood infection,” sepsis is a global health care problem that is more common than heart attack and claims more lives than any cancer. In the least developed countries, it is a leading cause of death.

In the developing world, sepsis accounts for 40 percent of all neonatal lives lost per year and more than 100,000 women contract sepsis in the course of pregnancy and childbirth.

In children and adults, sepsis occurs when the body’s attempt to fight an infection results in the immune system damaging tissues and organs. This chaotic response, designed to protect us, causes widespread inflammation, leaky blood vessels and abnormal blood clotting resulting in organ damage. In severe cases, blood pressure drops, multiple organ failures ensue and the patient can die rapidly from septic shock.

Other collaborators on the study were: