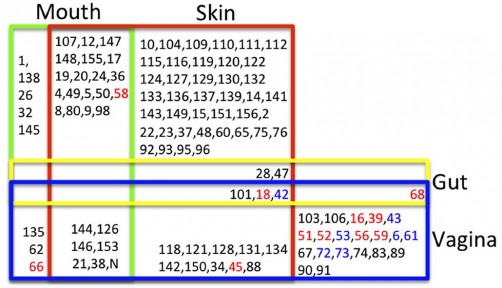 Researchers at NYU Langone found 109 strains of HPV infection in tissue samples from the skin, vagina, mouth and gut of “healthy” American adults.

Note: This poster presentation,#2357, at the American Society for Microbiology meeting is titled “Human Papillomavirus Community in Healthy Persons, Defined by Metagenomics Analysis of Human Microbiome Project Shotgun Sequencing Data Sets” and will be on display from 10:45 a.m. to 12 noon EST, Tuesday, May 20, in Exhibit Hall B at the Boston Convention Center in Boston, Mass.

Newswise — In what is believed to be the largest and most detailed genetic analysis of its kind, researchers at NYU Langone Medical Center and elsewhere have concluded that 69 percent of healthy American adults are infected with one or more of 109 strains of human papillomavirus (HPV). Only four of the 103 men and women whose tissue DNA was publicly available through a government database had either of the two HPV types known to cause most cases of cervical cancer, some throat cancers, and genital warts.

Researchers say that while most of the viral strains so far appear to be harmless and can remain dormant for years, their overwhelming presence suggests a delicate balancing act for HPV infection in the body, in which many viral strains keep each other in check, preventing other strains from spreading out of control. Although infection is increasingly known to happen through skin-to-skin contact, HPV remains the most common sexually transmitted infection in the United States. It is so common that experts estimate nearly all men and women contract some strain of it during their lives.

“Our study offers initial and broad evidence of a seemingly ‘normal’ HPV viral biome in people that does not necessarily cause disease and that could very well mimic the highly varied bacterial environment in the body, or microbiome, which is key to maintaining good health,” says senior study investigator and NYU Langone pathologist Zhiheng Pei, MD, PhD. Dr. Pei, an associate professor at NYU Langone, plans to present his team’s findings on May 20 in Boston at the annual meeting of the American Society for Microbiology.

Lead study investigator and NYU Langone research scientist Yingfei Ma, PhD, says “the HPV ‘community’ in healthy people is surprisingly more vast and complex than previously thought, and much further monitoring and research is needed to determine how the various non-cancer-causing HPV genotypes interact with the cancer-causing strains, such as genotypes 16 and 18, and what causes these strains to trigger cancer.”

For the study, which took two years to complete, researchers analyzed data made publicly available from the National Institutes of Health (NIH) Human Microbiome Project, which is gathering information on microorganisms’ effects on human health.

The NIH data consisted of comprehensive DNA analyses assembled by a technique called shotgun sequencing. The DNA decoding technique helped sort through vast amounts of genetic material among 748 tissue swabs of study participants’ major organs, including skin, vagina, mouth, and gut. Tissue samples were originally collected from healthy study volunteers, ages 18 to 80, participating in the NIH project. In shotgun sequencing, the genetic code of long strands of DNA is deciphered in a random firing pattern, much like pixels in a photo, until a full picture becomes apparent.

Researchers then refined their analysis to only HPV strains by removing all human DNA sequences and, using special bioinformatics software developed at NYU Langone, comparing what was left with known national databases on HPV. Dr. Pei cautions that until the harm or benefits of the many HPV strains become apparent, people should not be overly concerned, but consult their physician or an infectious disease specialist to assess any potential threat before seeking any antiviral or other therapy. In addition, he says getting vaccinated against types 16 and 18 is still “a good idea,” especially for preventing cervical cancer, until broader, more comprehensive anti-HPV vaccines become available that also target cancers in other body organs and tissues.

Among the study’s other key findings:- Some 109 of 148 known HPV types were detected in study participants.- Most study participants had HPV infections in the skin (61 percent); then vagina (41 percent), mouth (30 percent), and gut (17 percent).- Of the 71 study participants infected with HPV, 42 (59 percent) had HPV in only one organ, 22 (31 percent) had it in two organs, and seven (10 percent) had it in three; none had HPV in all four organs tested.- Skin samples contained the most varied HPV strains (80 types of HPV, including 40 that were found only in the skin). Vaginal tissue had the second most numerous strains (43 types of HPV, with 20 strains exclusive to the organ), followed by mouth tissue (33 types, of which five were exclusively oral in origin), and gut tissue (six types, all of which were found in other organs).Dr. Pei says his team’s study results also highlight the weaknesses in current clinical test kits for HPV, currently designed to recognize only a dozen or more viral types most closely tied to cervical cancer. He says broader detection methods and comprehensive diagnostic tests are needed to more accurately assess people’s “true” HPV infection status.

According to Dr. Ma, the team has plans to investigate which non-cancer-causing HPV types may play a role in cancers of the cervix, mouth and skin. The team also plans to develop better diagnostic tests, which would test for all known types of HPV.

Funding support for the study was provided through the US NIH Roadmap Initiative’s Human Microbiome Project (grant number UH3 CA140233) and the National Cancer Institute, also a member of the NIH (grant number U01 CA18237), with additional support from the Office of Research and Development, Veterans Health Administration, at the US Department of Veterans Affairs.

NYU Langone Medical Center, a world-class, patient-centered, integrated academic medical center, is one of the nation’s premier centers for excellence in clinical care, biomedical research, and medical education. Located in the heart of Manhattan, NYU Langone is composed of four hospitals—Tisch Hospital, its flagship acute care facility; Rusk Rehabilitation; the Hospital for Joint Diseases, the Medical Center’s dedicated inpatient orthopaedic hospital; and Hassenfeld Children’s Hospital, a comprehensive pediatric hospital supporting a full array of children’s health services across the Medical Center—plus the NYU School of Medicine, which since 1841 has trained thousands of physicians and scientists who have helped to shape the course of medical history. The Medical Center’s tri-fold mission to serve, teach, and discover is achieved 365 days a year through the seamless integration of a culture devoted to excellence in patient care, education, and research. For more information, go to www.NYULMC.org, and interact with us on Facebook, Twitter, and YouTube.