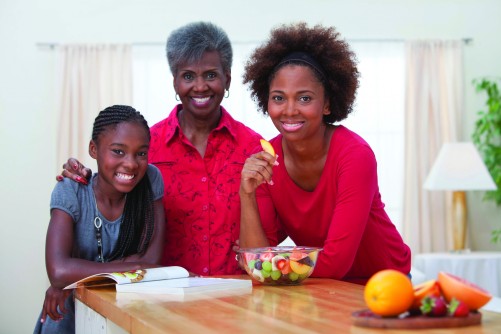 More than half of African American women are obese.

Newswise — A new study suggests the reasons for disparities in obesity rates between African-American and white women are far more complex than the usual go-to culprits of socioeconomics, fruit and vegetable intake, and exercise.

More importantly, according to obesity experts, the research published this past week shows the need to delve further into the questions of obesity.

“The black-white difference is only one of the puzzles researchers are faced with in understanding how levels of obesity vary,” said Shiriki K. Kumanyika, founder and chair of the African American Collaborative Obesity Research Network, based at the University of Pennsylvania School of Medicine.

“Many experts are also looking at factors in the food environments and opportunities for physical activity as possible influences on disparities,” she said. “We need all kinds of studies, statistical ones like these that give us clues and studies in the real world that tell us how people are dealing with their environments. This research recognizes an important problem that is poorly understood and shows there are more creative ways to study obesity in African American women. But it points to the need for more comprehensive data.”

The study’s author, Bisakha Sen, an associate professor of health care policy at the University of Alabama at Birmingham, crunched health data using a method typically used by economists to analyze gender wage disparities. Her findings were published this past week in Obesity. The health information came from the national Behavioral Risk Factor Surveillance System, a massive ongoing telephone survey conducted by the Centers for Disease Control and Prevention. The study used data only from Alabama and Mississippi.

The model Sen used statistically eliminated the differences in socioeconomic status, diet and physical activity levels to see how much of a role they played in body mass index. She found that the BMI of African-American men was almost equal to that of non-Hispanic white men. But the same didn’t hold true for women in the study.Using the same weeding out process, the socioeconomic, eating and exercise variables could only account for about 10 percent of the differences in obesity between non-Hispanic white women and African-American women.

“I was frankly surprised by what we perceived as common wisdom, on what policy is based, might not be the case,” says Sen, who specializes in labor and health economics. She says other factors such as culture or genetics may need to be studied more closely.

People with a BMI of 30 or higher are considered obese, which typically is 20 percent or more above ideal weight.

In all, more than a third of the U.S. adult population is obese, according to the CDC, increasing the risk for diabetes, cardiovascular disease, hypertension and certain cancers. African-Americans have the highest age-adjusted rates of obesity, 47.8 percent. For non-Hispanic whites, it is 32.6 percent.

More than half of African American women are obese, with a rate of 56.6 percent. Among Hispanic women, the rate is 44.4 percent; for whites, 32.8 percent and Asians, 11.4 percent. Those statistics are from the CDC’s National Health and Nutrition Examination Survey, 2011-2012.

“I’m not going to change the way I practice just yet,” says Dr. Rani G. Whitfield, a family physician in Baton Rouge, La., and a volunteer for the American Heart Association. He says he sees socioeconomic factors play an important role in some of his female patient’s access to healthy food and exercise, “but this (study) does open the door to ask more questions.”

His practice of 6,000 is primarily adults, but he has become known as “Tha Hip Hop Doc” for his health messages to children. He says he combats early obesity by encouraging women to breast feed and to not introduce solid foods to their babies until after four months. Studies have shown breastfed babies tend not to be obese later in life. Whitfield says he wonders about how to take into account that variable – and a variety of others such as stress and racism. Sen already is at work on a follow-up report that this time uses a data set with more detailed health information and variables. She plans to apply the same economic model, and “we’ll see how that plays out.”