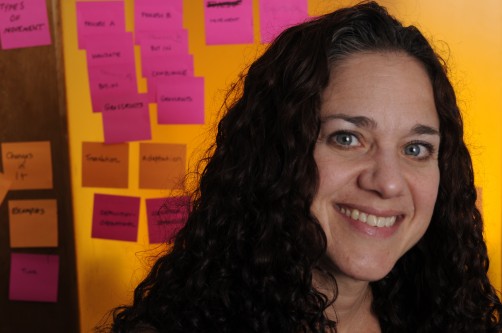 The University of Chicago’s Jeanne Century, pictured here, is working with Ohio State University's Kathryn Sullivan to study the implementation, spread and sustainability of Science, Technology, Engineering and Mathematics chools in Ohio.

Newswise — Researchers at the University of Chicago and Ohio State University will use a $1.5 million grant from the National Science Foundation to study the implementation, spread and sustainability of Science, Technology, Engineering and Mathematics in Ohio.

Ohio emerged as a high-profile STEM innovator, following the January 2008 launch of the Ohio STEM Learning Network. State and private partners, including the Bill & Melinda Gates Foundation and Battelle, have committed $50 million to the network to better prepare Ohio students for jobs in the 21st-century economy.

"They've created this network with an expectation that what is learned and what's established in these schools will spread and grow statewide," said Jeanne Century, director of science education, research and evaluation at UChicago's Center for Elementary Mathematics and Science Education. Collaborating with Century on the study is Kathryn Sullivan, director of Ohio State University's Battelle Center for Mathematics and Science Education Policy.

Although the study will focus on Ohio, organizers are working actively with emerging STEM networks in several other states, including North Carolina, Texas and New York. "The potential value of the lessons and insights that will come from this study go well beyond helping just the Ohio network better understand what they've been doing and how to keep going," Sullivan said.

The Ohio STEM Learning Network has established STEM hubs for students of diverse socio-economic backgrounds in Akron, central Ohio, Cincinnati, Cleveland and Dayton, each of which include a STEM "platform" school. "It's a very intentional attempt to facilitate networking across the state. So whether it's effective, and how it works, that's part of what we're studying," Century said.

Sullivan became impressed with the importance of STEM networking while attending a meeting in Washington, D.C., a year after the 2007 publication of Rising Above the Gathering Storm: Energizing and Employing America for a Brighter Economic Future. She noticed that individuals from all over the country who were implementing large-scale educational innovations had initially underestimated how much time they would need to spend networking with other organizers.

"They were saying, 'Now I find how central, how pivotal, the orchestration of a network of people is.' They clearly all had dismissed the challenge of the networks in the design stage," Sullivan said.

The meeting prompted Sullivan to conduct a preliminary study that identified some of the important components of effective networking needed to establish Metro Early College High School in Columbus, Ohio. She had been part of the network that launched the Metro School in her former position as director of Columbus' Center for Science & Industry. "Metro then morphed and grew. It was the root of the concept that became the OSLN," she said.

Sullivan expanded the Metro networking study with another one, completed earlier this year, which examined the Ohio STEM Learning Network more broadly. Century, meanwhile, had begun working with the network's Cleveland hub last July, performing an evaluation that predates the NSF grant.

Applying STEM in the workforce

The Cleveland hub's MC2STEM High School maintains close ties with local businesses and science organizations. The school's freshman campus, for example, is on the grounds of the Great Lakes Science Center, while the sophomore campus is located at GE Lighting Nela Park.

"They require all of their 11th-graders to do STEM internships with businesses, so they're not just science and math and technology-focused schools," Century said. "They're schools that are really trying to do something different, moving toward real integration and application of these disciplines in the workforce."

The UChicago-Ohio State University study will build upon previous work that shows how improving education and adopting innovations is more complicated than simply identifying best practices and exporting them to target schools. "We've concluded that sustainability can be interpreted as implementation over time. So we're focusing on how you measure implementation at any given moment," Century said.

The Ohio STEM Learning Network's practices and innovations include taking an integrated, problem-based approach to STEM education. This approach involves teaching critical thinking through STEM and applying it to the humanities and other disciplines as well as science.

Educators from MC2 and from the Central Ohio Hub already have shared this approach in institutes with K-8 educators in Cleveland. "We'll be checking those schools out as well, because part of what we're trying to understand is how these things spread. How do they get translated locally?" Century said.

The Ohio STEM Learning Network schools subscribe to a common set of shared principles, but how those principles get enacted varies from school to school. "Our work will be not just understanding the differences, but helping others understand that when you have an innovation based on principles, it plays out in a lot of different ways," Century said.