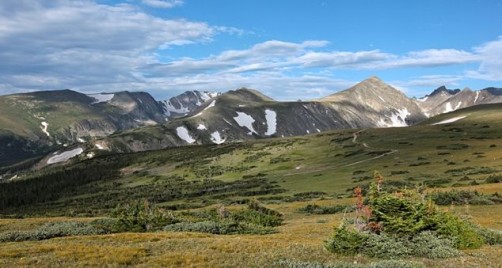 Research conducted at Niwot Ridge in Colorado explored how warming will alter tree establishment at and above the tree line.

But new research published Dec. 15 in the journal Global Change Biology suggests this may not hold true for two subalpine tree species of western North America. According to the study, Engelmann spruce may not move to higher elevations as temperatures rise, and its lower-elevation boundary could recede upslope, so its overall range could shrink. And the hardy limber pine may advance upward in a warmer climate, but likely at the same slow pace as in today’s climate.

The research was conducted by scientists from the Department of Energy’s Lawrence Berkeley National Laboratory (Berkeley Lab), UC Merced, the U.S. Geological Survey, UC Berkeley, and the University of Colorado at Boulder.

Their surprising findings are based on the discovery that the two species can be harmed by warming during the earliest stages of their lives, even at the cold, high-elevation edge of forest growth. In addition, seeds from trees now growing at the upper boundary of the species’ range may not fare well at higher elevations. These insights could help scientists improve models that predict where and how fast subalpine forests will move in a warming climate.

“The assumption that trees will track their climate underestimates the challenges they face during seedling recruitment. The odds are stacked against trees at this stage, even under normal conditions, and we found that warming decreases the young trees’ odds of survival even more,” says research leader Lara Kueppers, a scientist in Berkeley Lab’s Climate and Ecosystem Sciences Division and at UC Merced’s Sierra Nevada Research Institute.

“This means there’s a real risk that climate change may outpace tree migration—some trees may not be able to keep up with their climate,” Kueppers adds. “Seedlings are the future of the forest, so it’s very important to learn how warming will affect them.”

Scientists are interested in predicting what will happen to subalpine forests as the climate warms because a shift in the boundary between forest and alpine tundra biomes holds big implications for mountain water resources, the carbon cycle, and the planet’s climate.

“Tree seedlings growing in the alpine tree line are an indicator of the early impacts of climate change on mountain habitats,” says Matt Germino, a U.S. Geological Survey ecologist who contributed to the research. “The response of tree seedlings to carefully controlled warming treatments offers a window into a warmer world for forests.”

To shed light on the future of subalpine forests, the scientists set up experiments at Niwot Ridge, an ecological research site in Colorado’s Rocky Mountains. They focused on the impacts of warming on the first four years of the trees’ lives. They also accounted for the role of localized genetic adaptation by studying seeds collected from low and high elevation areas within the trees’ ranges. Both of these factors, seedling recruitment and genetic adaptation, are not well represented in models that predict the species’ responses to warming.

The scientists planted the seeds at three sites, one at the low-elevation edge of subalpine forest, another at the high-elevation edge of the forest (the current tree line), and a third site in the alpine zone where the trees don’t grow.

At each site, they planted 20 gardens divided into four groups. One group was heated from March to November with infrared heaters. This melted the snow early and raised the soil and seedling temperatures by several degrees, mimicking the effects of climate change. A second group was heated and watered, a third group was only watered, and a fourth control group was left untouched. The researchers planted the gardens each fall from 2009 to 2013 and followed their progress through 2014.

Counter to expectations, they found that warming reduced seedling survival for both species at all three elevations during the first year of life. The scientists expected survival rates to dip at the lower elevation site, where temperatures rose above the trees’ normal climate, but not higher up, where warming was expected to help seedlings. They attribute this lower survival rate to drier conditions caused by warming, which negatively affected seedling survival.

Survival rates diverged for the two species after the first year. For the limber pine, the scientists found some benefits of warming at some sites, but not enough to reverse the negative effects from the first year. So, after four years, there wasn’t a measurable effect of warming on survival.

“From this, we infer that limber pine has the potential to persist at its current location and expand upslope into the alpine zone, but it won’t expand any faster in a warmer climate,” says Kueppers.

For the Engelmann spruce, the negative impact of warming persisted through the fourth year. In addition, no warmed seedlings survived to be 4 years old at the low-elevation site. This means warming could impede the upward expansion of the species and cause the lower-elevation edge of its range to contract upslope.

“Overall, our findings indicate that seedlings are highly vulnerable to climate variation, which should be taken into account as we predict what will happen to subalpine forests in a warming climate,” says Kueppers.

The research was supported in part by the Department of Energy’s Office of Science.

Lawrence Berkeley National Laboratory addresses the world’s most urgent scientific challenges by advancing sustainable energy, protecting human health, creating new materials, and revealing the origin and fate of the universe. Founded in 1931, Berkeley Lab’s scientific expertise has been recognized with 13 Nobel Prizes. The University of California manages Berkeley Lab for the U.S. Department of Energy’s Office of Science. For more, visit http://www.lbl.gov.