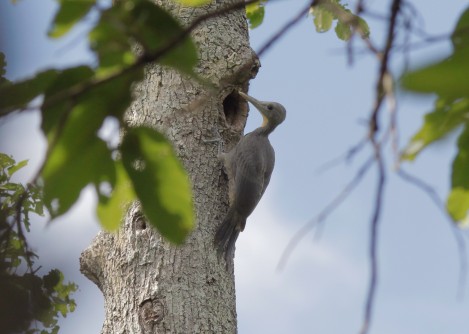 Great slaty woodpeckers are one of the birds that have largely vanished following the construction of the Chiew Larn Reservoir some 31 years ago.

BANGKOK, Thailand (December 7, 2018) – A study by an international team of conservation scientists found that a dam built in Thailand 31 years ago has caused the local bird population to collapse.

Reporting in the journal Global Ecology and Conservation, the authors found that 24 square miles (61 square kilometers) of dry forest now surrounds the reservoir. The 63 square-mile (165 square kilometer) Chiew Larn Reservoir inundated southern Thailand’s largest remaining tract of moist lowland rainforest – a unique habitat that was rich in biodiversity.  The area surrounding the reservoir is now permanently degraded due to deforestation and human-caused fire, and the bird community is thus dominated by a handful of disturbance-tolerant species. Meanwhile, forest-dependent birds have largely vanished, as the once-contiguous rainforest has been replaced by isolated habitat patches overgrown with bamboo and vines.

More than half the birds recorded by the research team, led by Greg Irving and co-supervised by WCS’s Antony Lynam and ornithologist Philip Round, now consist of just a handful of wide-ranging and disturbance-tolerant species. These birds include the pin-striped tit babbler (Mixornis gularis) and dark-necked tailorbird (Orthotomus atrogularis), along with bamboo-loving species such as the bamboo bush-warbler (Abroscopus superciliaris), Indochinese blue-flycatcher (Cyornis sumatrensis), bamboo woodpecker (Gecinulus viridis) and white-browed piculet (Sasia ochracea).

The authors say the results should serve as a cautionary tale as new hydroelectric projects are aggressively pursued in Asia. Without taking into account the potential for serious mainland edge effects and associated human disturbance of habitat, planners will underestimate the potential impact of hydropower development on bird biodiversity.

International entities, such as the World Bank, promote ‘good practice’ for reducing the impacts of hydropower on ecological systems using the principle of offsetting any potential impact on biodiversity with the goal of ‘no net loss’ or ‘net gain’. However, the authors say the vagaries and complexities of such biodiversity trading schemes render them impossible to monitor and implement and will in fact perpetuate biodiversity loss.

Said the study’s lead author Greg Irving of King Mongkut’s University of Technology Thonburi in Bangkok: “Planning processes related to hydroelectricity development need to be undertaken based on a realistic understanding of the negative impacts that any proposed project would have on biodiversity, including irreplaceable loss of lowlands and degradation of mainland habitat induced by edge effects.”

Said co-author Antony Lynam of WCS’s Asia Program. “Lowland rainforests across Asia are irreplaceable and nearly depleted; they should be conserved and expanded wherever feasible. They cannot be offset. Siting of dams and their sprawling reservoirs thus has to be carefully considered to strictly avoid any additional loss of riparian, lowland, and old-growth evergreen forest.”

The authors note that today, modern ‘greener’ sources of energy are available, including wind and solar, which leave smaller and more ephemeral environmental footprints. They say serious consideration should be given to whether any given large hydropower project is truly worth the environmental cost.