Studying Mitosis’ Structure to Understand the Inside of Cancer Cells

Researchers at UC San Francisco uncover the architecture of the spindle pole body in yeast. 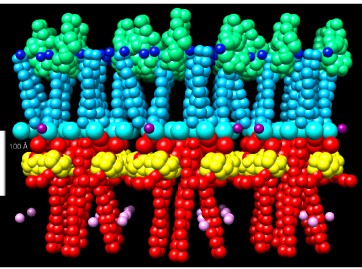 Newswise — WASHINGTON, D.C., February 18, 2018 -- Cell division is an intricately choreographed ballet of proteins and molecules that divide the cell. During mitosis, microtubule-organizing centers (MTOCs) assemble the spindle fibers that separate the copying chromosomes of DNA. While scientists are familiar with MTOCs’ existence and the role they play in cell division, their actual physical structure remains poorly understood.

Shruthi Viswanath, a postdoctoral scholar at the University of California, San Francisco, with a team of researchers, is trying to decipher the molecular architecture of the MTOC. They will present their work during the 62nd Biophysical Society Annual Meeting, held Feb. 17-21, in San Francisco, California.

MTOCs are specially designed structures within the cell that create, anchor and stabilize the network of microtubules that act like scaffolding within the cell. More than 1,000 proteins are associated with the MTOC in animal cells, but few of these proteins have been assigned a particular function.

Rather than untangle the complexity of the MTOC, Viswanath focused her research on yeast cells. Within these simpler organisms, the spindle pole body (SPB) functions like the MTOC. Unlike in animal cells, the SPB of yeast contains only 18 proteins and Viswanath has initially focused on five core proteins: Spc110, Spc42, Cnm67, Spc29 and Cmd1.

Using multiple techniques such as structural modeling, X-ray scattering, X-ray crystallography and electron microscopy, Viswanath and her team found that the Spc110 protein provides a greater function in the SPB than originally believed. At first, scientists thought these proteins acted as mere spacers holding pieces of the SPB architecture in place, but now it is believed these proteins may provide a binding surface for this architecture. This information can help understand the function of the human cell equivalent of SPBs called centrosomes. Cancer cells in most forms of cancer reveal abnormalities in the size or structure of centrosomes. Future experiments are necessary to identify the position of other key proteins, like Spc29, a critical protein in the SPB core and to eventually identify its specific function.

Each year, the Biophysical Society Annual Meeting brings together more than 6,000 researchers working in the multidisciplinary fields representing biophysics. With more than 3,600 poster presentations, over 200 exhibits, and more than 20 symposia, the BPS Annual Meeting is the largest meeting of biophysicists in the world. Despite its size, the meeting retains its small-meeting flavor through its subgroup symposia, platform sessions, social activities and committee programs. The 62nd Annual Meeting will be held at the Moscone Center (South) in San Francisco, California.

Embargoed press releases describing in detail some of the breakthroughs to be discussed at the meeting are available on EurekAlert!, Newswise and Alpha Galileo or by contacting the Media Line at the American Institute of Physics at [email protected] or 301-209-3090.

The Biophysical Society, founded in 1958, is a professional, scientific Society established to encourage development and dissemination of knowledge in biophysics. The Society promotes growth in this expanding field through its annual meeting, monthly journal, and committee and outreach activities. Its 9,000 members are located throughout the U.S. and the world, where they teach and conduct research in colleges, universities, laboratories, government agencies, and industry. For more information on the Society, or the 2018 Annual Meeting, visit http://www.biophysics.org.