New technology could open the door to seafloor earthquake monitoring 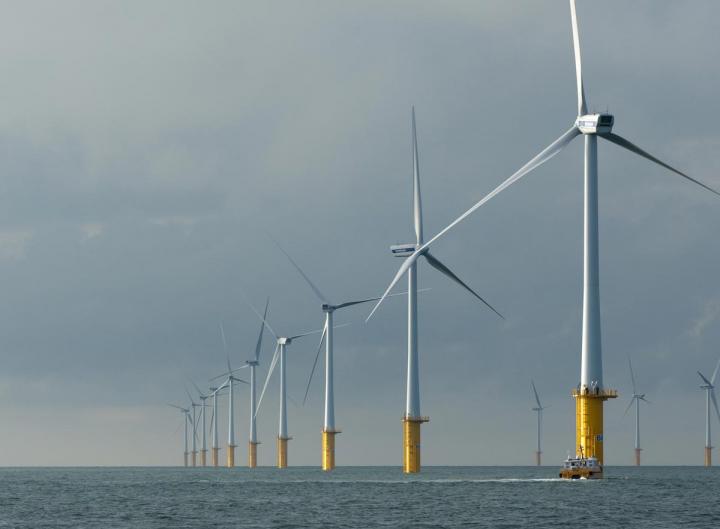 Researchers used fiber optic cable that connects a wind farm in the North Sea to detect an earthquake.

Newswise — An international team of geoscientists led by Caltech has used fiber optic communications cables stationed at the bottom of the North Sea as a giant seismic network, tracking both earthquakes and ocean waves.

The project was, in part, a proof of concept. Oceans cover two-thirds of the earth's surface, but placing permanent seismometers under the sea is prohibitively expensive. The fact that the fiber network was able to detect and record a magnitude-8.2 earthquake near Fiji in August 2018 proves the ability of the technology to fill in some of the massive blind spots in the global seismic network, says Caltech graduate student Ethan Williams (MS '19). Williams is the lead author of a study on the project that was published by Nature Communications on Dec. 18.

"Fiber optic communications cables are growing more and more common on the sea floor. Rather than place a whole new device, we can tap into some of this fiber and start observing seismicity immediately," Williams says.

The project relies on a technology called distributing acoustic sensing, or DAS. DAS was developed for energy exploration but has been repurposed for seismology. DAS sensors shoot a beam of light down a fiber optic cable. Tiny imperfections in the cable reflect back miniscule amounts of the light, allowing the imperfections to act as "waypoints." As a seismic wave jostles the fiber cable, the waypoints shift minutely in location, changing the travel time of the reflected light waves and thus allowing scientists to track the progression of the wave. The DAS instrument used in this study was built and operated by a team from Spain's University of Alcalá, led by study co-author Miguel Gonzalez-Herraez.

Recently, Caltech's Zhongwen Zhan (MS '08, PhD '13) began deploying DAS for seismology. For example, he and his colleagues tracked aftershocks from California's Ridgecrest earthquake sequence using fiber that stretches along the state's 395 freeway and also have tapped into the City of Pasadena's fiber network to create a citywide earthquake-detecting network.

"Seafloor DAS is a new frontier of geophysics that may bring orders-of-magnitude more submarine seismic data and a new understanding of the deep Earth's interior and major faults," says Zhan, assistant professor of geophysics and coauthor of study.

For the North Sea project, Williams, Zhan, and their colleagues employed a 40,000-meter section of fiber optic cable that connects a North Sea wind farm to the shore. There are millions of tiny imperfections in the cable, so they averaged out the imperfections in each 10-meter segment, creating an array of more than 4,000 virtual sensors.

"With the flip of a switch, we have an array of 4,000 sensors that would've cost millions to place," Williams says.

Because of the network's fine degree of sensitivity, the North Sea array was able to track tiny, non-earthquake-related seismic noise (or "microseisms") and found evidence that supports a longstanding theory that the microseisms result from ocean waves.

In 1950, mathematician and oceanographer Michael Selwyn Longuet-Higgins theorized that the complex interaction of ocean waves could exert enough of a rolling pressure on the sea floor to generate so-called Scholte waves--a type of seismic wave that occurs at the interface of a liquid and a solid. By tracking both ocean waves and corresponding microseisms, the North Sea array revealed that the microseisms could be the result of ocean-wave interactions.

The paper is titled "Distributed sensing of microseisms and teleseisms with submarine dark fibers." Co-authors include María Fernández-Ruiz and Regina Magalhaes of the University of Alcalá; Roel Vanthillo of Marlinks in Belgium; and Hugo Martins of the Institute of Optics in Spain. Funding for this research came from Caltech; JPL, which Caltech manages for NASA; the National Science Foundation; the Spanish Ministerio de Ciencia; Innovacíon y Universidades; and the European Union's Horizon 2020 Research and Innovation Programme.