Success of Dental Implants Depends on Both Patient and Surgeon 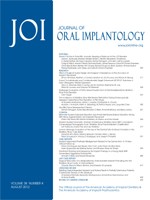 Success of dental implants depends on both patient and surgeon

Newswise — Journal of Oral Implantology – Characteristics of both patient and surgeon can affect the success of dental implants. A 10-year study finds that patient risk factors such as grinding teeth or diabetes increase the odds of implant failure. It also associates higher implant failure rates with surgeons who have less than 5 years of experience.

A study in a special issue of the Journal of Oral Implantology evaluated the success of 50 patients who received implant-supported fixed complete dentures. Encompassing a total of 297 implants, the retrospective study spanned 10 years, with a mean time of 3½ years from surgery to last follow-up.

The study examined failure rates for factors including type of prosthesis, surgeons’ experience level, smoking, diabetes, bruxism, and implant location—maxillary or mandibular. The implant failures in this study appeared to be affected by patient risk factors, such as diabetes, rather than by implant-related factors, such as location and length of implant.

The number of years and surgeries performed by the oral surgeon also had an impact on the success of the implants, as did the complexity of the surgery required. Implants placed by surgeons who had previously performed less than 50 implants were twice as likely to fail. The failure rate was 12 percent among surgeons in this study with less than 5 years of experience.

Traditional implant guidelines requiring a healing period of 3 to 6 months before functional loading of dentures are giving way to immediate loading of a functional prosthesis. The success rates of these two methods are comparable, although this study found a slight advantage for the traditional approach.

An implant was considered successful if no implant loss occurred and bone loss was less than 4 mm as assessed by periapical radiograph. Overall, the study found a better than 90 percent absolute success rate for implant-supported fixed dentures and an 85 percent cumulative implant success rate.

Full text of the article, “Immediate Loading of Maxillary and Mandibular Implant-Supported Fixed Complete Dentures: A 1- to 10-YearRetrospective Study,” Journal of Oral Implantology, Vol. 38, Special Issue No.1, 2012, is available at http://www.joionline.org/doi/abs/10.1563/AAID-JOI-D-11-00027

About Journal of Oral Implantology The Journal of Oral Implantology is the official publication of the American Academy of Implant Dentistry and of the American Academy of Implant Prosthodontics. It is dedicated to providing valuable information to general dentists, oral surgeons, prosthodontists, periodontists, scientists, clinicians, laboratory owners and technicians, manufacturers, and educators. The JOI distinguishes itself as the first and oldest journal in the world devoted exclusively to implant dentistry. For more information about the journal or society, please visit: http://www.joionline.org