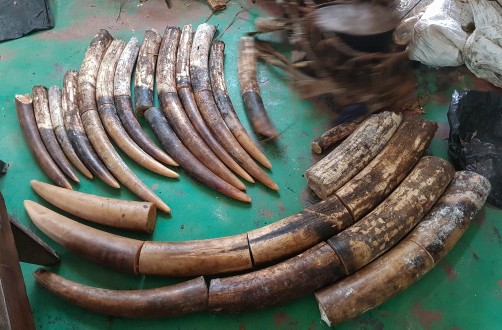 Three poachers responsible for slaughtering eleven elephants in and around Nouabale-Ndoki National Park in January were convicted to five years’ imprisonment by the local district court last week, according to WCS (Wildlife Conservation Society). The poachers, who had ventured deep into the remote Ndoki forest and spent three weeks killing elephants for their ivory, walked into an ambush setup by park rangers as they exited the forest on February 2nd. Three of the six poachers were apprehended.

Newswise — Three poachers responsible for slaughtering eleven elephants in and around Nouabale-Ndoki National Park in January were convicted to five years’ imprisonment by the local district court last week, according to WCS (Wildlife Conservation Society). The poachers, who had ventured deep into the remote Ndoki forest and spent three weeks killing elephants for their ivory, walked into an ambush setup by park rangers as they exited the forest on February 2nd. Three of the six poachers were apprehended.

Jonathan Kweme (alias Bony), Bolia Ezengue (alias Bolin), and Gloire Ekumu Mozuba (alias Eden Hazard), all from the Democratic Republic of Congo and currently living in Pokola, were tried and convicted up front at their court appearance on February 15th. The evidence, nearly 70 kilograms of ivory and an AK-47, were presented to the court and the judge’s decision swiftly followed, giving all three individuals the highest sentence for wildlife crime in Congo: five years in jail and a fine of 5,500,000 XAF each ($10,000 USD).

The head of the poaching group is still at large, along with the two other members of the gang. He is another notorious ivory trafficker responsible for transferring many hauls of ivory from the Republic of Congo to his home city of Kinshasa in the Democratic Republic of Congo. One of the three poachers convicted was recruited by the head of the gang when they met in Kinshasa in early 2017. Investigations to locate the gang leader and bring him to justice are ongoing.

“We commend the parks rangers of Nouabale-Ndoki in their continuing efforts to protect elephants in one of the last remaining strongholds of the species,” said Mark Gately, Director of WCS’s Republic of Congo Program. “The convictions of three notorious poachers sends a message that such activities will not be tolerated in one of Congo’s flagship protected areas.”

This latest poaching incident started on January 13th when a group of six poachers set out from the town of Pokola in search of ivory in the park’s southern periphery. They worked quickly and efficiently once an elephant had been killed, moving away from the area as quickly as possible to avoid detection.  After hacking free the tusks from the slain carcasses, the ivory was sawn into smaller more convenient chunks to ease transport. The poachers were indiscriminate in their choice of elephants to be shot – only two giant tuskers amidst a sorry clutch of ivory that belonged to females and young. The only part of the carcasses used, apart from the ivory, was trunk meat to nourish the poachers while in the forest.

The presence of the poaching gang was first detected by researchers at the Goualougo Triangle Ape Project working in the south of the Nouabale-Ndoki National Park. Reports of gunfire on January 25th were immediately reported by the Park’s protection team. Four ranger teams were strategically deployed to block and intercept the poachers exit.

A week later on February 2nd after night fall, the six-strong poaching gang stumbled into one of the ranger units waiting in ambush near a known point of access to the park. An intense encounter ensued when the rangers commanded the poachers to stop and drop their weapons. The poachers ignored the demand and opened fire, resulting in shots being exchanged between the two groups. As two more ranger units arrived in support, the poachers fled, dropping three baskets containing equipment, medicines, smoked elephant trunk, and seventy kilograms of ivory amounting to 16 tusks in total.  Exchange of gunfire between the park’s anti-poaching force and poachers has become more frequent, a possible result of strengthened law-enforcement efforts and increased penalties faced by those caught.

Their evasion was short-lived. Three days later on February 5th, the Park’s law enforcement agents and local police arrested three members of the poaching gang in the nearby logging town of Pokola. The arrested individuals later admitted to fleeing through the night, caching their weapon in the forest near to Pokola, before attempting to disappear. Several strong intelligence leads had given their position away to the authorities.

For these individuals, this is their first conviction, but not their first poaching mission. All three admitted to their involvement in numerous illegal incursions into the NNNP, collectively removing nearly 400 kilograms of ivory from the forest in the last four years. They have links to some of northern Congo’s most notorious elephant poachers and ivory traffickers, including Samuel Pembele, who was convicted of poaching in the same area in October 2016. (https://www.newyorker.com/news/news-desk/a-win-in-the-ground-war-against-elephant-poachers-in-africa).

The Nouabale-Ndoki National Park, spanning 4,200 square kilometres of pristine lowland rainforest, is managed by the Nouabale-Ndoki Foundation, a public private partnership between the Congolese Government and WCS Congo Program. Operating under the Nouabale-Ndoki Foundation, Nouabale-Ndoki’s law enforcement team works to help bring wildlife criminals to justice, with support from the U.S. Agency for International Development’s Central Africa Regional Program for the Environment (CARPE), the U.S. Fish and Wildlife Service, and the Elephant Crisis Fund - an initiative launched by the Wildlife Conservation Fund and Save The Elephants.