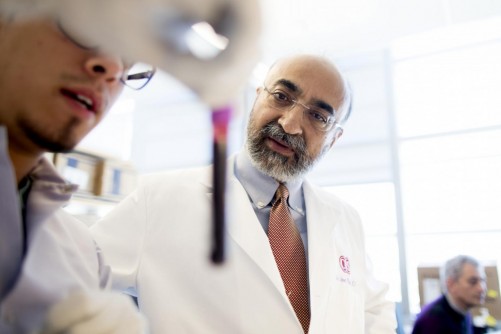 Sumeet Chugh, MD, at work in his laboratory.

Newswise — LOS ANGELES (Feb. 17, 2020) -- New research from the Center for Cardiac Arrest Prevention at the Smidt Heart Institute at Cedars-Sinai shows that rates of sudden cardiac arrest are rising following decades of a downward trend. While this disturbing uptick was observed in both sexes, in women the increase was mostly among those whose sudden cardiac arrest was the first manifestation of heart disease. In men, the increase was mostly among those with known heart disease.

The study was published in the Go Red for Women issue of the peer-reviewed journal Circulation.

"The study validates the need for the discovery of novel risk factors and diagnostics to reduce the risk of sudden cardiac arrest among women," said Kyndaron Reinier, PhD, MPH, research scientist and associate director of Epidemiology at the Center for Cardiac Arrest Prevention, and first author on the study. "And, because more than 40% of both men and women had known heart disease before their sudden cardiac arrest, prevention and treatment of heart disease remain critically important."

The findings are part of the Oregon Sudden Unexpected Death Study, a comprehensive, 16-hospital, multiyear assessment of cardiac deaths in the Portland, Oregon, metropolitan area led by Sumeet Chugh, MD, director of the Center for Cardiac Arrest Prevention and associate director of the Smidt Heart Institute.

Unlike heart attacks (myocardial infarctions), which are typically caused by clogged coronary arteries reducing blood flow to the heart muscle, sudden cardiac arrest is the result of defective electrical activity of the heart. Patients may have little or no warning, and the disorder usually causes death within minutes if no resuscitation is performed. Sudden cardiac arrest accounts for approximately 300,000 deaths each year in the U.S.

"This appears to be a recent trend, and to our knowledge there is little data regarding reasons for this rise," said Chugh, who also serves as the Pauline and Harold Price Professor of Cardiac Electrophysiology Research. "It's possible that regional, racial and socioeconomic differences could contribute, but more research is needed."

As a next step, the research team hopes to gather additional biodata from the Oregon Sudden Unexpected Death Study to identify targets for prevention in women.

"This study highlights the important implications of understanding the differences in risk stratification, screening and diagnosis of heart disease between men and women," said Emily Tinsley, MS, program officer in the Division of Cardiovascular Sciences at the National Heart, Lung, and Blood Institute (NHLBI). "The information we learn from studies like this is essential for promoting effective and unique preventive strategies for heart disease in women."

The Oregon study, which recently completed its 18th year, has been funded by the NHLBI since 2007. Here are some of the findings from the study published in prior years: