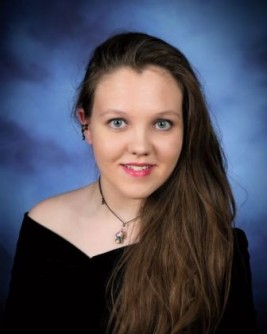 Newswise — SALISBURY, MD---Georgia Fried is into roller derby, the contact sport on roller skates, so she knows all about how things can get bumped. Such was the case when she made her college decision.

“There was about a year in high school that I was convinced that I was going to MICA,” said Fried of the Maryland Institute College of Art in Baltimore.

Then — Bam! — MICA was shoved aside by Salisbury University.

Come this fall semester, the North Dorchester High School graduate will be a freshman at SU — the only college she applied to, the only one she truly wanted to attend — and it was a summer program at SU that dug a decisive elbow into MICA’s rib cage.

From 2012 to 2014, Fried attended the Maryland Summer Center for the Arts (MSCA), which offers middle and high school students an opportunity to study music, visual arts, theatre/acting, filmmaking and writing in a two-week residential setting (MSCA has been on hiatus since 2015). Fried accumulated six weeks of hard work and fun on campus, and it was her fond memories of MSCA that convinced her to spend the next four years of her life at SU.

What MSCA did, like many summer programs and camps at SU, was offer Fried an invaluable and productive introduction to college life — and life beyond college.

MSCA requires auditions, and Fried, a multimedia artist (paintings, silk screens, sculpture), described the process as “very much like a scholarship interview. I brought in some of my work, had a talk with one of the teachers, and they wanted to know what I wanted out of the program.”

What she got were connections. She connected with the campus, and she connected with the professors, particularly Robert Smith, co-chair of SU’s Theatre and Dance Department and the director of MSCA. When college-application time arrived, Fried was confident that she would get into SU. Why?

“Robert Smith wrote a recommendation letter for me,” said Fried, who is, thanks to Smith’s influence, going to major in theatre, with an emphasis on production.

It was an easy letter to write.

“Georgia is a talented young lady,” Smith said. “I could not be happier with her decision to join the SU community.”

It was an easy decision to make.

Against an MSCA backdrop, “SU felt like home,” said Fried, who lives in Rhodesdale, Md. “I know the campus. I won’t have the first-year jitters, because I spent six weeks there. A lot of friends [from MSCA] are already there. I know the classrooms. I know the other professors.”

She also knows what she wants to do with an SU degree.

“I hope to get in the theatre business,” said Fried, who wishes to stay flexible between the domains of costumes and set design. “I chose this because of the people. I like the people associated with the theatre and acting.”

New York, of course, is an option, but she wants to “see where the career kind of points me.”

In the meantime, the direction Fried goes might be around and around the flat track of the Salisbury Roller Girls. When she gets to SU, she wants to try out for the team, joining the colorfully named ranks of Concealed Carrie, Lexa Cution and Ginger Snapped.

What’s going to be her danger-filled sobriquet? It’s required.

She laughed. “I hadn’t thought about it.”