Sunlight or Bacteria? Scientists Investigate What Breaks Down Permafrost Carbon

New Study Could Have Implications for Climate Change Research 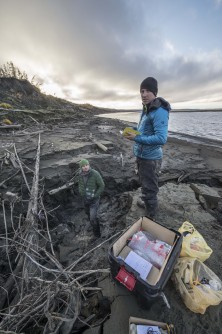 Newswise — TALLAHASSEE, Fla. — A Florida State University researcher is delving into the complexities of exactly how permafrost thawing in the Earth’s most northern regions is cycling back into the atmosphere as carbon dioxide and further fueling climate change. Answer: It has a lot to do with tiny little bugs called microbes and little to do with sunlight.

Assistant Professor of Earth, Ocean and Atmospheric Science Robert Spencer and a team of researchers traveled to Siberia from 2012 to 2015 to better understand how thawing permafrost affected the carbon cycle and specifically to see if the vast amounts of carbon stored in this permafrost were thawing and how it w transferring to the atmosphere as carbon dioxide.

In a paper published in the American Geophysical Union Journal of Geophysical Research-Biogeosciences, Spencer along with Aron Stubbins from the University of Georgia explain that bacteria were the dominant consumer of this carbon. They are gobbling up the carbon from the thawing permafrost and spitting it back out as carbon dioxide.

Permafrost in this region is exceptionally deep — more than 100 feet in certain locations — and has remained frozen for tens of thousands of years. But as the Earth has warmed, it has started to thaw, releasing carbon back into the modern carbon cycle and ultimately to the atmosphere, further contributing to warming.

Understanding how this carbon degrades over time provides critical information to scientists as they investigate the full environmental impact of climate change. “Addressing the photochemical fate of carbon in Siberia provided us with a wealth of information that we can use in the future as we try to move forward and develop models to predict the fuller effects of climate change,” Stubbins said.

On one hand, knowing sunlight doesn’t break down permafrost-derived carbon is a positive, Spencer said. The Arctic is warming faster than anywhere else on Earth causing a decline of ice cover and an expansion of lake area. Because the potential for photochemical processes to occur is increasing, knowing this material has limited reactivity to photochemical degradation is important, Spencer added.

But on the flip side, Spencer noted that the conversion of permafrost- derived carbon to carbon dioxide is still happening.

“Our research has shown permafrost carbon is very attractive to microbes,” Spencer said. “It’s not going from one long-term storage in permafrost to another long-term storage in the oceans. Bugs are chewing on it in streams, rivers, lakes and marine systems and sending it back into the atmosphere. In other words, bacteria make the world go ‘round and these tiny organisms have a big impact on the global carbon cycle.”

The research is funded by the National Science Foundation. ###