Supermassive Black Holes May Be Lurking Everywhere in the Universe 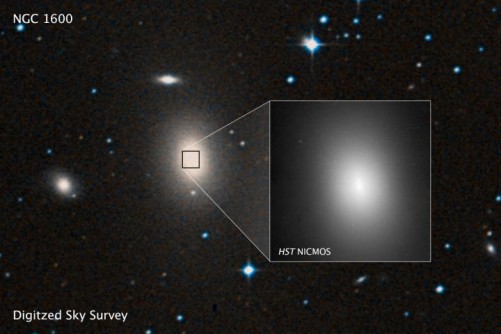 A sky survey image of the massive galaxy NGC 1600, and a Hubble Space Telescope closeup of the bright center of the galaxy where the 17-billion-solar-mass black hole -- or binary black hole -- resides.

Newswise — A near-record supermassive black hole discovered in a sparse area of the local universe indicates that these monster objects - this one equal to 17 billion suns - may be more common than once thought, according to University of California, Berkeley, astronomers.

Until now, the biggest supermassive black holes - those with masses around 10 billion times that of our sun - have been found at the cores of very large galaxies in regions loaded with other large galaxies. The current record holder, discovered in the Coma Cluster by the UC Berkeley team in 2011, tips the scale at 21 billion solar masses and is listed in the Guinness Book of World Records.

The newly discovered black hole is in a galaxy, NGC 1600, in the opposite part of the sky from the Coma Cluster in a relative desert, said the leader of the discovery team, Chung-Pei Ma, a UC Berkeley professor of astronomy and head of the MASSIVE Survey, a study of the most massive galaxies and black holes in the local universe with the goal of understanding how they form and grow supermassive.

While finding a gigantic black hole in a massive galaxy in a crowded area of the universe is to be expected - like running across a skyscraper in Manhattan - it seemed less likely they could be found in the universe's small towns.

"Rich groups of galaxies like the Coma Cluster are very, very rare, but there are quite a few galaxies the size of NGC 1600 that reside in average-size galaxy groups," Ma said. "So the question now is, 'Is this the tip of an iceberg?' Maybe there are a lot more monster black holes out there that don't live in a skyscraper in Manhattan, but in a tall building somewhere in the Midwestern plains."

Interestingly, the stars around the center of NGC 1600 are moving as if the black hole were a binary. Binary black holes are expected to be common in large galaxies, since galaxies are thought to grow by merging with other galaxies, each of which would presumably bring a central black hole with it. These black holes would likely sink to the core of the new and larger galaxy and, after an orbital dance, merge with the emission of gravitational waves. The proposed Evolved Laser Interferometer Space Antenna, or eLISA, is designed to detect gravitational waves produced by the merger of massive black holes, while other groups are looking for evidence of gravitational waves from massive black hole mergers in nanosecond glitches in the precisely timed flashes of millisecond pulsars.

Ma and her colleagues will report the discovery of the black hole, which is located about 200 million light-years from Earth in the direction of the constellation Eridanus, in the April 6 issue of the journal Nature.

In search of quasar remnants

Black holes form when matter becomes so dense that not even light can escape its gravitational pull. In the early universe, when gas was abundant, a handful of voracious black holes grew to become extremely massive by swallowing it up, emitting immense amounts of energy. Looking back in time at the distant universe, these supermassive black holes appear as very bright quasars. As astronomers look closer to Earth, however, they see galaxies with little gas - it's already turned into stars - and no quasars. The most massive of these local galaxies may, however, house old quasars at their cores. Ma says that the monster black holes her team discovered in 2011 in NGC 4889 and NGC 3842, each weighing about 10 billion solar masses, may be quiescent quasars.

Because NGC 1600 is an old galaxy with little new star formation, Ma suspects that it, too, may harbor an ancient quasar that once blazed brightly but is now asleep. It would be the first discovered in a sparsely populated region of the local universe, she said.

"The brightest quasars, probably hosting the most massive black holes, don't necessarily have to live in the densest regions of the universe," she said. "NGC 1600 is the first very massive black hole that lives outside a rich environment in the local universe, and could be the first example of a descendent of a very luminous quasar that also didn't live in a privileged site."

The MASSIVE Survey was funded in 2014 by the National Science Foundation to weigh the stars, dark matter and central black holes of the 100 most massive, nearby galaxies: those larger than 300 billion solar masses and within 350 million light-years of Earth, a region that contains millions of galaxies. Among its goals is to find the descendants of luminous quasars that may be sleeping unsuspected in large nearby galaxies.

The supermassive black hole found in NGC 1600 is one of the first successes of the project, proving the value of a systematic search of the night sky rather than looking only in dense areas like those occupied by large clusters of galaxies, such as the Coma and Virgo clusters. The new findings combine image data from the Hubble Space Telescope and spectra taken by the Gemini Telescope in Hawaii and the McDonald Observatory in Texas.

Based on the Gemini spectra of the center of NGC 1600, most stars inside the sphere of influence of the black hole - a region about 3,000 light-years in radius - are traveling on circular orbits around the black hole, with very few moving radially inward or outward. It is as if the stars on radial orbits towards the black hole have been slung away, Ma said.

This would be the case only if the closest stars were scattering off a black hole pair and slingshotted away, just as NASA slingshots space probes around other planets to move them more quickly through the solar system.

The black hole's sphere of influence - the region within which the gravity due to the black hole wins out over that due to visible stars - is much larger than the event horizon, the point of no return, which would be about eight times the size of Pluto's orbit for the NGC1600 black hole.

"Somehow the stars have been scared away from the center of very massive galaxies, and either were afraid to come in, or came in and got kicked out," Ma said. The stellar orbits around the center of NGC 1600 indicate the latter, which "may be support for a binary black hole formed by a merger."

Because stars flung out by a binary black hole sap energy from the orbiting pair, the two move closer together and eventually merge. If NGC 1600 does contain a binary black hole with a combined mass of 17 billion suns, orbiting a fraction of a light-year apart, the ongoing pulsar timing arrays have a chance of picking up the emitted gravitational waves, Ma said.

NGC 1600 suggests that a key characteristic of a galaxy with binary black holes at its core is that the central, star-depleted region is the same size as the sphere of influence of the central black hole pair, Ma said. Images taken by the Hubble Space Telescope revealed that the center of NGC 1600 is unusually faint, indicating a lack of stars close to the black hole. A lack of stars close to the galactic center distinguishes massive galaxies from standard elliptical galaxies, which are much brighter in their cores.

"One dynamical footprint of a binary black hole is core scouring," Ma said.

This signature will help Ma and her colleagues refine the MASSIVE Survey and more quickly find the supermassive black holes in Earth's vicinity.